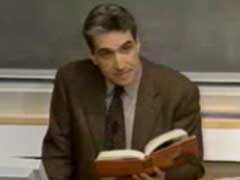 
Some years ago a letter I wrote about the poet Robert Lowell, and his poem “Waking In The Blue,” was published in the first edition of “America’s Favorite Poems,” that the former poet-laureate of the United States Robert Pinsky edited. So my friend poet Harris Gardner and I jumped at the chance to attend a lecture and private reception at the “MIT Media Lab,” that we were invited to. I have always admired Pinsky for his “Favorite Poem Project,” that has produced anthologies of selected poetry and letters from ordinary, and for the most part non-poet Americans. Pinsky was going to talk about his ambitious, on-going project; as well as his work with Tod Machover of the Media Lab that involved a collaboration on an opera titled: “Death and the Powers: A Robot Pageant.”

The opera, still in development, has robots as its main characters that are in the midst of an enigmatic transformation. Pinsky said he is not that well-versed in contemporary opera, but he is excited about the project. He feels “liberated” working on the libretto, with both rhyme and language.

Pinsky’s eyes took on a new light when he discussed his “Favorite Poem Project.” Pinsky wanted to collect poems that “real” Americans were willing to read and loved. When he showed a video of Americans reading from their favorite poems, (A DVD is included with the latest anthology) his philosophy of bodies and breath as the essential artistic components of poetry took on new meaning. There were animated readings of favorite poems by children—to a construction worker from Quincy, Mass. reciting “Song of Myself,” by Walt Whitman.

Pinsky feels that often when academics read great poems they don’t really hear the poem. They drone on and on during their reading of the poem and the excitement is lost. The Americans who read their poems made it clear that this genre of expression is still alive and kicking.

MIT English professor and Conrad scholar, David Thorburn, an old friend of Pinsky’s from Stanford University, exchanged anecdotes about the old days with the celebrated poet much to the delight of the audience. Thorburn opined that Pinsky’s poetry has changed over the years from conversational to more visionary work. Pinsky replied that he makes no conscious decision to be more visionary in his work; it is just an organic process in his writing.

Pinsky also talked about his new book: “The Life of David,” an account of the biblical poet-king. Pinsky said he was fascinated by David because he was a walking contradiction. He was in Pinsky’s words, “… a great killer and poet, the quintessential hero, and a consummate politician.”

During the Q and A session Pinsky talked about the inaccessible quality of contemporary poetry. He said often young poets don’t want to appear naïve and the inaccessible style protects them from this. Pinsky told the young poets in the audience that they must risk seeming stupid in their work. They must take risks to be authentic.

After the lecture there was a reception at the MIT Stata Center where Pinsky held court to a flock of admirers. He is an affable, approachable man, not to mention a scholar and poet; the perfect person for bringing poetry back home to the ‘people” where it belongs.