The Field of Happiness by Charles Rammelkamp 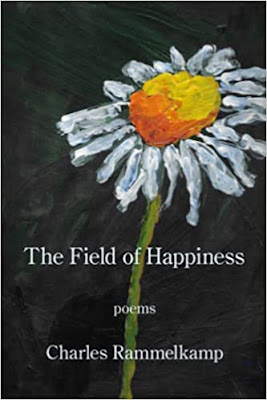 The Field of Happiness by Charles Rammelkamp

The Field of Happiness is a character driven collection of poems by Charles Rammelkamp. We travel through the decades with Charles and the characters in his life, both real and imagined. It is his journey but it could be your journey with slight deviations. Rammelkamp creates with compassion and an eye for detail and on occasion irony.

Rammelkamp brings the grifters, hookers, back seat love, school mates, college stories, work stories and even a tale of a concentration camp boxer, baseball and yes he even waxes poetic on tennis. The narrative is quite simply Charles Rammelkamp. He travels Michigan; Maryland; Massachusetts and Pennsylvania. Along the way he picks up characters who charge this collection of narrative poetry.

He tells us of Celebrity, the chance encounters of meeting the famous:

when you get next to it,

after the swimming pool.

In the poem "Meeting of the Titans," the poet Randall Jarrell meets the quarterback Johnny Unitas.  It deals with how Jarrell was pleased and how Unitas had no clue to who he was:

Still wouldn’t it have been something

had Johnny U. recognized greatness

when it approached him on the plane.

The poem Snow Day concerns his daughters day home from school when interrupted by a car crashing into Rammelkamp’s car and his neighbors. Of course it isn’t the drivers fault when of course it is. Charles ends the poem:

The Camaro caromed off one parked car

and then another, like a guy in a singles bar

And so, Charles writes of the accident on a snow day and in his Rammelkampian way ends up in a singles bar.

The poem "Now You’re a Metaphor", Charles tells of the Memorial Day parade in Potawatomi Rapids and the grand marshal, Mr. Engstrom of the Spanish-American War:

"White –whiskered Mister Engstrom…borne down Erie Street in a gas-guzzling convertible/ behind the high school marching band/ waving, looking a little vague, bewildered/ he was time itself; he was age personified."

Even though viewed when a young man, the images of Engstrom flood back to him. Why? It was the day he wrote the poem that his Medicare insurance kicked in a week shy of sixty-five. For some reason I don’t see Charles riding in a convertible on memorial day, metaphor or not.

He writes of encounters along the interstate, local shopping center, of the glorious past and the present. Rammelkamp even has jottings on Nixon and Trump. We travel the road with Charles and embrace the characters in his poems, warts and all. What we learn by the time we reach the end of the collection is that there are fields of happiness in his life and ours and for the most part to get there depends on how you view it.

You can find the book here: https://kelsaybooks.com/products/the-field-of-happiness

g emil reutter is a writer of poems, stories and occasional literary criticism. He can be found at: https://gereutter.wordpress.com/about/