From the Bloc 11 Cafe: Interview with poet Toni Bee 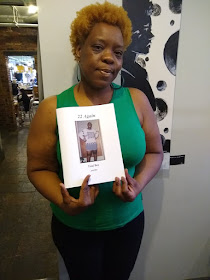 From the Bloc 11 Cafe: Interview with poet Toni Bee

Toni Bee met me in the backroom of the Bloc 11 Cafe to discuss her life as a poet, mother, woman, activist, African-American, etc... Bee made it clear to me that she doesn't want to be straight-jacketed into any particular label. A formidable figure, with a voice that makes sure it is heard, Bee also exhibits a great deal of warmth. But she is not one who is afraid to spit out the truth no matter how uncomfortable it feels.

Bee, who lives in Cambridge, but has many Somerville connections, said in an interview that she has an affinity for 'odd people,' and being a dues paying member of the group, I asked her about it. She told me, “I probably got that from Jason Wright, the founder of “Oddball Magazine.” Odd people are not embraced within society. I want to embrace them through my poetry and art.”

Now, I am proud to be among the band of three who created the Somerville Poet Laureate position, and as it turns out Bee was the Poet Populist of Cambridge from 2011 to 2013. I asked her what the difference is between a populist poet and a poet laureate. She said, "The poet populist is elected by ballot. Citizens of Cambridge voted for the populist poet, unlike Somerville where a committee selected the poet laureate." According to Bee her tenure in the position was a positive one. She recalled, “ The position gave me a sense of professionalism and also a chance to work with youth—always an emphasis of mine.” Bee has a TV show on Cambridge Access, she ran a venue for music and poetry at the Middle East Restaurant in Central Square, Cambridge-- among the many activities she is and was involved in.

Bee is not a native of Cambridge, but of Boston. She found that living in Cambridge was a good fit for raising her daughter. Bee reflected, “ Cambridge has its problems, but it has less of the violence than I experienced in Boston.”

I asked Bee if we could talk about her being a founding member of the Black Lives Matter group in Cambridge. She said, “No,” but then politely qualified this. She stated, “ I am a believer in 'intersectionality.' I don't want to be known only as an African American woman—because like all people I am many things. I am a woman, poet, activist, mother, daughter. I don't like to be placed in a  pigeon-hold. So I  do discuss it but with that light in mind."

Many poets from Somerville and beyond—have been a great help to Bee. She mentioned a number of them,  Chad Parenteau,  Afaa Michael Weaver, Dexter Roberts, Gilmore Tamny and of course her own mother. But she fondly recalled being a student at Simmons College. She was an older student, with a child, and a limited income-- so it was a tough stint. But she remembers taking the final poetry class that the celebrated poet Afaa Michael Weaver taught  before he retired. She recalled, "His class was inspirational—it was a catalyst for my life as a poet today.”

In her introduction to her poetry collection “22 Again” she writes, ( often in the vernacular) “ The language I use in this book is an amalgam of word rhythms I have been hearing my entire life. Me, my native country—we is an exquisite mix. I celebrate that. My Daddy made sure we met our half-African great-grandma from Jamaica. And I could neva' understand how she was speaking. Mommy, Eartha Mae, were from South Carolina. And when she called home on weekends, her accent became that sing-song I rarely heard, yet adored. R&B and Hip-hop was the background beat. And growing up in Dorchester was madd diverse. My language became otherized; it seeps in my work.”

Toni Bee is yet another creative person I have encountered here-- in the Paris of New England.

This here body
This here body should eat double chocolate donuts when it's bulk is sleepy or rather wait on the peanut butter cocoa cookie it wants this body is a berry batch, batch juice better than chocolate, body This body, is fluffy pillow needing crunches This body thrills on this Slim paper,slim paper, make body slimmer, do I care if my body swings? do that speak to my pride? In other countries they'd say I was rich, praise body for its excess, its fertileness, in this land just bulk. Yell -body move quicker- put fork down faster- stop eat cheese- leave chocolate alone-forever unless the oxiAnti kind, dear this body you pretty amazing body, don't fuss at the teen, stop wanting so very much more, Body wonders what to do next, first no eat nasty donuts tomorrow or the 30th, yawn, crunch, take stairs, Love? make it stretch you. Body fly your body flies your body is fly, fly my body be