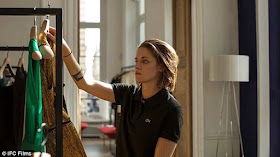 There is an empty empty house at the beginning of the new film starring Kristen Stewart, *Personal Shopper*, directed by Olivier Assayas, which makes an apt setting for a long opening of silence, situating the viewers precisely in their seats, in the act of watching. As Michael Nordine in his City Pages review observes, “*Personal Shopper* is a quiet movie, all the better for us to hear every creaking floorboard and let our minds follow sounds that might not be emanating from our realm.” Nordine’s term “quiet movie” recalls the old original “silent movie,” so called after “talkies” were invented. It’s not too simple to remember here that we call them “movies” because they are pictures in sequence, that move. Any director or film that includes significant silence, or scenes thereof, is citing the art at its origins. The way Assayas has the camera following Maureen (Kristen Stewart) through the empty house, room to room, in this long opening scene is reminiscent of Stanley Kubrick’s following little Danny on his tricycle through the empty halls of the vast resort hotel in the mountains in *The Shining*.
Another reference to Kubrick in Assayas’ astonishing ghost story comes by way of the material opulence encountered in the fashion luxuries Maureen shops for. These high-priced glitzy dresses and leather handbags and spike-heeled shoes are not for her. Maureen seeks the items out to rent for a high-profile vedette whose career status is uncertain, yet whose fate (you’ll have to see this for yourselves) stuns both the viewer’s sense of humanity and better-knowing. (It might be added that the star’s fate is not unusual in terms of the dynamics of Inspiration/follower, and the character Maureen comes under suspicion.)
Hence the film’s title, *Personal Shopper*, serving as the film’s primary scenario. Celebrities of whatever profession, movie stars themselves, must have helpers of all kinds, among them clothing shoppers. It is assumed in the film that Maureen is bodily identical (shoe size, dress size, height, etc.) with the vedette she shops for. An interesting element of the film is how Maureen feels about trying on and at times wearing these luxury items, which is a kind of taboo for her. For though she and the star are dimensionally parallel, they are of distinctly separate personalities. One thing the film does is to remind us of the dangers of vanity involved in just being a star, in belonging to the capricious circle of affluent, important people. Stewart’s character Maureen otherwise dresses down, in just jeans (uncomfortably stiff and narrow at the calves) and sweatshirts and awkward bright white running shoes.
The film’s driving scenario and back stories are calibrated into a delicate balance that actually evokes a lot about film making (any creative or artisanal vocation, even cabinet making, for that matter), acting, and the lives around the profession. Most of us know something about shopping for clothes, to some extent. What most of us perhaps do not know much about is waiting in an empty house for the phenomenon of a ghost or poltergeist to make itself known. It is odd and enjoyable that the film reverses the terms of familiarity and the exotic or odd, to underscore our capacity for personal loneliness, with the Internet configured into our cell phones. While we probably communicate more with one another than ever before, we are likely more personally and bodily alienated from one another, and full of strange ideas about “others,” to the extent of the paranoia that makes a murder/horror film credible as a psychic mirror. At one point in the film a mystery texter asks Maureen what she hates. The audience gets a good laugh at her reply: horror movies.
For a viewer attuned to the genre, there’s a lot more humor throughout the film, particularly in the fleeing (moped) scenes ensuing the film’s intensely scary moments. Even veterans will feel the hair on their necks rise. The ghost is convincingly intractable and dominating, with awesome special effects. Yet the outcome of the film leaves one wondering whether the star Maureen shops for isn’t more terrible. In our times it isn’t so farfetched to think that it is we humans who haunt our world.