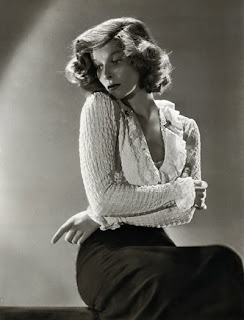 
The legendary Katharine Hepburn was indeed, notorious for refusing to sign autographs but must not have considered correspondence as "autograph" because I have many letters and notes from her (signed) as well as one cherished autographed photo.


She was interested in doing a screenplay of mine back in theearly 80s, "Walking Song". She liked it but kept demanding I "cut it down "because it was "too long". I cut it and sent it back to her. "Too long",came back the reply. "Cut more!"So I cut and cut and cut.


This went on awhile until the happy day when I was summoned to 244East 49th St. in tony Turtle Bay to meet her. She was much shorter than I pictured, maybe 5' 7", stunning face, very self-centered. It seemed, for the longest time, to be about homemade brownies and tea with Hepburn doing little calesthetics in between ("Opens the pores"). When I finally worked up the courage to ask about the play, Her Majesty waved a dismissive hand, said, "Oh,that play's too short", gave her housekeeper a look that said, "Get him out of here" and ascended into the nether sphere.


HAHAHAHA!!!!! I was crushed. About a month or so later, I received a photo of Hepburn in the mail. On it she wrote, "Sorry.You whittled that thing down to a nub." 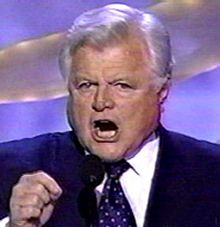 Back in the 1980s, I was working
for UMass Lowell Libraries (then
called ULowell) when the Senator
came into O'Leary and headed up
the stairs with his entourage to
the director's office. My colleague,
Marge Ryder, said, "Darn! Now we
won't get to meet him!" A little
while later, Marge nudged me; the
Senator was coming down the stairs
by himself and went into our faculty
lounge. Marge grabbed my arm
and said, "Here's our chance!!"

But once inside the lounge,
we found hide nor hair of Kennedy
and Marge yelled out, "Where the
HELL is he??? He was just in here!!"
No sooner had she said this than
the toilet in the Men's Room flushed
and the Senator emerged. He barely
had time to zipper up when Marge
torpedoed herself at him and introduced
the both of us. In spite of the embarrassing
moment, Ted was more than gracious
and kind. Soon, we were joined in the
lounge by other staffers and the Senator
regaled us with his instant wit and charm.

In all the excitement, I lost track
of the conversation and did not realize
it had turned to talk of the conflict
in Northern Ireland. Innocently, I
piped in, "Did something bad
happen in Northern Ireland?",
thinking some new development
had occurred. Ted's face took on
an air of disbelief and in his full-on
Kennedy accent he said, "YOU
don't KNOW about the TROUBLES
In NORTHERN IRELAND???
dad silence fell on the faculty room.
Then he pointed at me and
ordered, "String this man up
BY THE BALLS!!!"