Review of A Prayer for Everyone by Tomas O’Leary

Review of A Prayer for Everyone by Tomas O’Leary

I find the idea poem daunting, but O’Leary takes on the form with unbridled gusto—and often with humor. In the section’s title poem, “What One Has Said,” he examines “truth” and “candor:”

I speak now only that I not be lying.
If I should die before I wake, well, hell,
at least the light is on. The darkness drops again
each time I hesitate. I train my tongue
into orbit around silences.

Even a poem about a cat named Ashes ends up a Buddhist meditation:

The cage of consciousness is not hers to pace
As she flattens down to refuge in the Buddha.
Lordly, they take the sun together,
Fur and stone – the ravager
And the holy one, fast friends…

O’Leary has a clever way of personifying ideas, so that they’re not just dry thoughts, but things that move around in front of the reader, as in “Hands Without Pockets,” where the contrast between what men and women do with their hands says much about the differing natures of the two sexes:

So often have women turned
their hands into grace, through gesture
or occupation, without

misgivings all will come out
right, they clearly manage
naked. Men, though, are lost, their hands

determined to hide deep in their pockets…

I was so enamored of O’Leary’s ability to manipulate ideas in his poems that I wanted more, so my less enthusiastic response to the story/character poems probably reflects that wish. It’s not that the cast of characters isn’t interesting and colorful: “The Perfectionist’s Midlife Crisis,” “Dick Cheney on Iambic Truth Serum,” “A Monk Gone Larking,” “The Alehouse Lion Rises and Orates.” The book’s first and title poem, “A Prayer for Everyone,” which might have served better as the introduction to this last section, captures O’Leary’s appreciation for the wonderful variety of human nature:

And he delineates these characters, tells their stories, with great enthusiasm. The “Monk Gone Larking” is not actually a monk, but the thumb of coast-to-coast hitchhiker who meets a lovely lass along the way:

…as I pass her the blackberry brandy.
She takes a belt that’s neither

greed nor daintiness and passes
back the bottle. Does she mind
if I smoke? Hell no,

go right ahead, do I have
any hemp, ha ha? I do ha ha.
Now the Chevy’s on air jets five feet

above the highway, in perfect gear…

“The Book of Shite” pillories a mythical landlord, Lord Owen Shite – I’m assuming he’s meant to be an English landlord in Ireland – and the ass-kissing Irish priest who convinces the Irish, represented by Doug MacDeep, that serving Shite is an honor:

In jags contumely strove
the florid pigwit Doug MacDeep
to caution tenants by the drove
they’d Christwise best contain their peep,
scale down the larder and eke out
the doubled rent since sunset last
they must be paying Owen Shite,
who suffers them to till his dust.
…

The priest was circumspect and pure,
a man of God who loved a story:
Spreading his subject like manure,
he harvested a Shite of glory!

Though certainly bold and enthusiastic, these story/character poems don’t quite have the impact for me that O’Leary’s idea poems have. He’s clearly a man of profound thought, even when he’s making ideas do cartwheels for us. In fact, it’s those cartwheels that help us reconsider ideas in a new light – and how many writers of poetry or prose are capable of making us do that?
Doug Holder at 2:01 AM 1 comment:
Share

Somerville Renaissance Women Yani Batteau: An artist who believes in transformation through the arts. 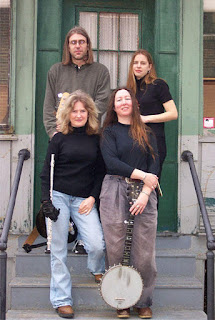 
I met Somerville artist, musician Yani Batteau at a recent meeting of the Bagel Bard's in Davis Square. She was wearing a big cowboy hat, and carrying a banjo case. She is a woman with optimistic, bright blue eyes and a down home manner about her. She is an artist who believes that art has the power to transform people--the power to change things. More than once she has involved folks in one of her many projects and they came away with a new sense of their potential.

Batteau is decidedly a renaissance woman. She is an accomplished banjoist, vocalist, and even has a flip art book published about the Statue of Liberty titled: " The Statue of Liberty Takes a Dive" that is housed in the Museum of Modern Art in New York City. She has worked as a graphic artist, college instructor, and has won Somerville and Mass. Arts Council Awards. One memorable project she undertook was the " Living Statue" project at South Station in Boston. She painted live humans in bronze body paint. These statuesque humans motionlessly postured amidst the din and rush of commuters as they made their way to yet another work day.

Batteau also plays the five string banjo. She describes her music as mountain style, or "vintage country" She said: " My voice and my music meld together well." Batteau has played Club Passim, Johnny D's in Davis, and The Somerville Theatre to name a few venues.

Batteau often works with the Somerville Arts Council. Although she admires Gregory Jenkins the current head and thinks he is a great organizer, she looks fondly back to when her close friend Cecily Miller was at the helm.

Batteau loves being in Somerville with its "quirky people" and its decidedly artistic vibe. But like many artists she looks to the time she won't be able to handle the high rents and stringent parking regulations.

Batteau who is of French and Puerto Rican descent does house painting on the side to help keep food on the table and the wolves from the door. She remains optimistic and very busy, and in spite of these "post-recessionary" days she still believes that art can truly change things.
Doug Holder at 1:13 AM No comments:
Share

The Jewish Book Festival will be Nov. 21, 2010. I am glad to say Steve Glines, Doug Holder, and Paul Steven Stone will be on a publishing panel at this gala event. Read details below:


The JCC Boston Jewish Book Fair is a series of literary events featuring an eclectic line-up of notable authors. Programs include panel discussions, readings and workshops by some of the best voices in Jewish literature.


The JCC Boston Jewish Book Fair is a series of literary events featuring an eclectic line-up of notable authors. Programs include panel discussions, readings and workshops by some of the best voices in Jewish literature.

Miriam Goldman Authors Fund presents
BE YOUR OWN PUBLISHER!
A Workshop on Publishing-on-demand • 3-5:30pm

Print–on-demand and self-publishing remain avenues whereby authors can get their books out into the market without costing a fortune, providing they do their homework and don’t get carried away by dreams of best sellers. Paul "Steven" Stone, author of Or So it Seems and creative director at W.B. Mason; Steve Glines, founder of the ISCS Press; and Doug Holder, founder of the Ibbetson Street Press, will introduce this brave new world of publishing. 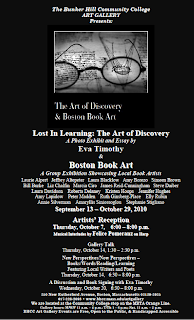 This month, Somerville’s de facto poet laureate Doug Holder announced a partnership between Ibbetson Street Press and Endicott College in Beverly. It’s running on a test basis for this academic year. “It’s kind of a joining of Somerville and Beverly,’’ said Holder, who has been teaching at Endicott and Bunker Hill Community College for the past year since losing his 27-year position at McLean Hospital. The relationship is a classic win-win, he said: Ibbetson, which publishes a quarterly poetry journal as well as books, gets funding, prestige, and an office, and the college gets attention and student support. “They want to promote their arts program — they have a new arts center,’’ Holder said. In addition to publishing the journal, Holder will start a reading series and send students into the community for literary internships. The college is supporting only the journal, not Ibbetson’s poetry book line. Holder will still maintain the press’s primary office in Somerville. Learn more at dougholder.blogspot.com. — Danielle Dreilinger
Doug Holder at 8:31 PM No comments:
Share
‹
›
Home
View web version