The Age of Aberrancy & the Poètes moignons by Tod Slone 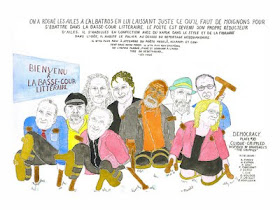 
This is taken from Tod Slone's American Dissident site: you know you are doing something right when Slone attacks you....

As part of an ongoing experiment to test the waters of democracy, especially in the academic and literary arenas, notice of this blog entry was sent to each of the persons depicted in the above watercolor (see below). Will any of them dare comment? Likely not. Their shame is that they do not cherish, but rather scorn, vigorous debate, democracy’s cornerstone. Their shame, at least those in the teaching profession (Pinsky, Marchant, Houlihan, Wright, and Espada), is that they do not seek to expose their students to all points of view and all possibilities for inspiration with regards writing, including and especially dissidence and purposeful conflict with power. Their shame is their contentment that dissidents like me and others are kept out of their festivals, kept from public funding, and kept from the eye of youth. Their shame is that my freedom of expression and that of other American dissidents is being crushed at every corner. Some of them have even become millionaire professor poets. Indeed, how can one possibly expect raw, visceral truth from such persons?

The only concrete explanation I could come up with was the clique. Marchant often reads paired with Houlihan. Then Charles Coe of the Massachusetts Cultural Council and Massachusetts Poetry Festival refuses to address my request to be invited to the latter. To that concoction, I added Doug Holder of Ibbetson Press, who interviewed Coe and didn’t seem upset at all that I was not invited to the Festival. Then, to fill out the picture, I added Robert Pinsky who received an award from Holder, Martin Espada of the University of Massachusetts for diversity’s sake, and Franz Wright of Brandeis University, who was invited by Houlihan to read.

Of course, many others could have been added to the picture. Duke University professor Gary Hull, Director of the Program on Values and Ethics in the Marketplace, for example, could have been added. He refused to respond to my emails requesting he place my signature, as editor of The American Dissident, on a petition he created to decry Yale University’s decision to censor cartoons. Has it perhaps gotten that bad that petitions are only open to certain categories of citizens?

In America, perhaps we are indeed now in the Age of Aberrancy, where censorship has become rampant and censors extolled as moderators of pre-approved bourgeois aesthetics. George Orwell would have gone nuts with so much material to write about!

In essence, the rancid odor of cliquishness characterizes the established-order academic/literary scene. Offend the clique and risk ostracizing. It’s quite that simple. What really concerns the clique is not literature per se and certainly not democracy, but rather the marketing of clique members and their books.

As noted in the watercolor, its idea was also inspired by Brueghel’s painting, “The Cripples” (or “The Beggars”) and Léo Ferré’s 1956 preface to "Poète...vos papiers !" (see www.theamericandissident.org/Essays-Ferre.htm) In the quote, Ferré mentions that poets cut off their own wings, leaving just enough “moignon” (stump) so they may flutter about in the Literary Poultry Yard. He also mentions that we may expect little, if any, hope from poets of that sort
Doug Holder at 9:33 AM No comments:
Share

Poets in Residence in “The Somerville Home”

Poets in Residence in “The Somerville Home”

Now—you would expect to find poets in the new Arts Amory in Somerville, or amidst the din of the Bagel Bards in Davis Square, or at a high-toned literary retreat like Yaddo…or its ilk. But you might be surprised to find a couple of practicing bards at “The Somerville Home,” on Highland Ave—a five minute walks from the poet residency of my apartment on School St. According to a pamphlet I was given by the energetic Activity Director Lori Verrecchia, The Somerville Home is “… a private, non-profit corporation providing residential services for over 100 years. We are a 59 bed Level 4 Residential Care Facility incorporated in 1898, licensed by the Mass. Department of Public Health. The Home provides protective supervision in addition to the minimum basic care and services required for residents who do not routinely require nursing or medically related services…”

The Somerville Home is immaculate and the residents are evidently well taken care of, and seem to be content, and yes, (a rarity I know), happy. On a stormy, wind-swept morning in December I met the two poets in a private room, along with the officious and official house cat “Princess”

Poet Helene King told me she has been a resident of the home for 12 years, and a poet all her life. She originally hails from South Boston, and used to run a haberdashery shop in Boston. Elena Lowry, her fellow bard, hails from Arlington, Mass, and has been a resident for 6 years. She worked for 25 years at the Boston Stock Exchange. Both poets said they were influenced by Longfellow, and Emily Dickinson, but weren’t crazy about Robert Frost.

King told me her poetry has a very strong religious bent as evidenced by this poem:

Jesus is born on this day.
He is the rock of all nations.
Given to us by the Father,
He is for us the savior
For salvation.
And may his flock
Continue to serve Him,
With prayer and praise we
Will be saved and bring
Others to kneel before Him, With love and fervor,
We adore Him, bare our souls.
Praise Jesus, help us live
For you.
And keep the Christ in Christmas.

King told me, with her signature modest manner, that her poetry has been published in The Pilot, an influential Catholic paper. King writes poetry to celebrate nature, express her feelings, and hopefully to move people.

Lowry, like yours truly, has a fondness for the harsher elements of New England like: wind, rain and even snow (as long as she doesn’t have to shovel it). She has kept journals for many years, and is well-practiced at her craft. Here is a very germane poem for the season, titled: “Snow”

Snow
Swirls of mystical crystal
Falling everywhere
Essence of wonder,
Joy.
The children’s laughter
As they play,
Throwing snowballs at you.

It’s a release of pure enjoyment,
Fills the air mingled
With the sound
Of falling snow.

Gentle kisses on your brow
Silence!
Trickling droplets as
The snow descends,
A world of white & glisten,
Sparkles fill us with wonder
Permeates every care.

These two poets talked about their life at the Home, which consists of a lot more than Bingo on weekend nights. They have a writing group run by an accomplished wordsmith Cam Terwilliger; they make frequent field trips, and are given numerous “freebies” by many Somerville businesses. They said Somerville is a great place to be old. “ Everyone is supportive, and the City really takes care of their seniors,” they chimed in.

I was told that The Somerville home is open to community groups who want to use their space for events. They welcome the opportunity for residents and community members to interact. Before we left, both poets invited me to their annual Christmas Gala on Dec. 21. My mouth watered as they described the succulent scallops wrapped in bacon, and other epicurean delights that are served. It is good to know there is a place like this that treat people with dignity and respect—something our older citizens richly deserve.
Doug Holder at 7:10 AM 1 comment:
Share 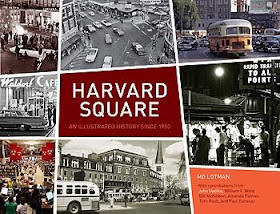 The first thing I noticed when I opened up Mo Lotman’s impressive illustrated history of Harvard Square was a picture of the Tasty Sandwich Shop. It closed a number of years ago, and it was right next to an equally defunct restaurant the “Wursthaus.” I used to frequent the “Wursthaus” for their marvelous selection of beers, the beauty of their Bratwurst, and to dodge the barbs from the ancient waitresses. The Tasty on the other hand was only a counter, but it served an excellent cup of coffee in an old fashioned mug, and there was always the comforting sight of hotdogs simmering on a grill in a sea of grease. The counterman used to call me “smiley” because of my own frequently pensive mug. Anyway, although I have lived in my beloved burg of Somerville for the past 15 years, Harvard Square has been an equally important part of my experience since I arrived on the shores of the Charles River in the 1970’s to attend college.

“Harvard Square: An Illustrated History Since 1950” is divided in sections (by the decade) from the 1950s to the 2000s. It is richly illustrated, with a plethora of interesting essays, etc… It starts out with a piece by the late, renowned writer and Harvard graduate John Updike, in which he writes about the drugstore he used to frequent in the Square, and well, then, he goes from there:


"On Sunday mornings I would give myself the treat of sleeping through the bells from Memorial Chapel and then walking in the opposite direction to the drugstore...I would dip into my modest allowance to the extent of a cup of coffee and a cinnamon doughnut at the counter...The helpful maps in Mo Lotman's priceless assemblage of photographs told me that this haven from Latin and calculus was called Daley's Pharmacy."


The photographs in this book are breathtaking--as alluring, at least for me, as any photos of nature's splendor. From the 1950s section I saw a spread of the Square that included the ghosts of James P. Brin Sportswear, Hazen's Lunch, and Philip’s Bookstore--that will certainly tweak the memories of folks a lot older than me.


And like any square that is worth its salt, it is full of characters. And Lotman doesn't leave them out. There are portraits of Frank Cardullo, the owner of the famed eatery the” Wursthaus,” who held court every afternoon at a long table, sucking on his signature cigar, and holding court with a gaggle of cops, and various stumble bums on the scene. Just to give you a taste of this feast of an illustrated history there are descriptions and pictures of Sheldon Cohen, the former owner of the Out of Town News, the late storyteller and bard of the streets of Harvard Square: Brother Blue, Louisa Solano, the former owner of the Grolier Poetry Book Shop, to name a few.


This is a hands down impressive book and well worth the five ten spots you will slap down for it. The book will open the floodgates of your memory, and if you are a writer it is certain to jump start you from the stasis of your latest writer's block. 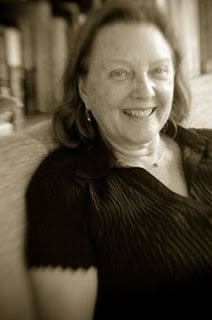 Ibbetson Poet Molly Lynn Watt ("Shadow People" Ibbetson Street) has been named the Poet Laureate of the Harvard Institute of Learning in Retirement. I go this from Molly yesterday.....


On Wednesday at 3:15 I have been invited to read some of my new Civil Rights Movement Poems at Harvard Institute for Learning in Retirement. My reading will be accompanied by Joan Green, a dancer and choreographer, dancing with my reading. We have joined in a similar collaboration earlier this fall and it was well received.

The event, about an hour long total, includes a wine and cheese reception and I will be honored by being installed as Poet Laureate of The Harvard Institute for Learning in Retirement. This event honors me where I found my voice as a poet and the Civil Rights Movement was where I found my voice as an activist.
Doug Holder at 3:37 AM No comments:
Share
‹
›
Home
View web version