Beyond The Curtain Lies Magic and Enchantment. A review of "The Beloved Children" by Tina Jackson 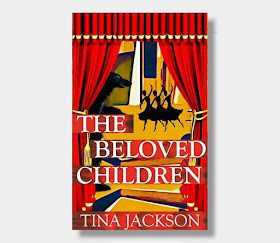 Beyond The Curtain Lies Magic and Enchantment. A review of "The Beloved Children" by Tina Jackson

It only takes a few paragraphs for the reader to grasp they have entered a uniquely strange and magical world inside the covers of Tina Jackson’s “The Beloved Children.” Ms. Jackson wastes no time in upsetting the reader’s sense of reality, so much so that a warning should be issued urging readers to wear weighted boots if they hold any hope of staying grounded in reality.

Ostensibly a wonderful tale of theater life in wartime Britain, “The Beloved Children” follows the exploits of three young women entering the theater world at a time when war has shaken all sense of normalcy upside down. A time when one might easily question, "Is there a better time for magic than when War roams the land?"

The three young women come from different backgrounds, all vying for openings in Fankes Theater’s in-house terpsichorien act known as The Three Graces. It quickly becomes clear that the fates of the three novice dancers are tightly entwined with those of two fantastic mainstays of Fankes' house staff, a timeworn, bearded seamstress whose powers of creation and enchantment extend far beyond the limits of needles, thread and costume scraps, and a Russian émigré whose fantastic history includes dancing before the Czar with a bear who later accompanied her across the European continent in her travels west.

Sound fantastic? It most certainly is!

Ms. Jackson exhibits tremendous depths of storytelling magic in weaving her spell and tossing all the elements of her fantastic story into the air like so much magic dust that eventually falls to earth much like the final dance steps of The Three Graces, with charm, grace and the enduring hopes of youth. “The Beloved Children” is magic realism at its most daring and accomplished. And Tina Jackson a literary prestidigitator of the highest order.