Jacob Kramer: A children's writer who brings noodles and critters to life. 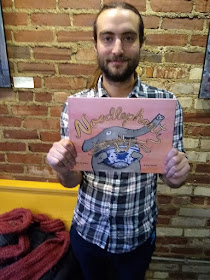 Jacob Kramer: A children's writer who brings noodles and critters to life.

Jacob Kramer met me at my perch in the backroom of the Bloc 11 Cafe in Union Square, Somerville. The fireplace was on full blast—to foil the frigid winter winds just outside the window. Kramer, is a youngish man with a scruffy beard, and wears his long hair in a ponytail. I noticed something wide and child-like in his eyes—undoubtedly some seminal flame that still burns with a kid's wonder.

Kramer is a graduate of Harvard University, and has lived in our burg for six years. Originally from Providence, Rhode Island, he lives in what I consider a well-appointed spot in Union Square—close to that U.N. of  supermarkets, Market Basket. Kramer told me,“ I love Somerville—I have a number of friends here. The Somerville Arts Council has been very supportive of my work, not to mention the Somerville Public Library, Porter Square Books, and the Somerville Museum.”

Kramer revealed to me that a person has to have a good sense of humor to be a children's writer. He elaborated, “ You have to try to understand what you care about, and why you care about it on the most basic level. Then you have to deliver to your audience. And for children that means delivering it in the most straightforward way.

I asked Kramer if his study of film at Harvard informed his work as children' writer. He replied, “ With film making you have to think in scenes, cuts and edits. This is in some ways like my genre of writing. You always have to have a page turner to keep the kid's attention. You have to have one scene, then cut to the next surprise on the following page.”

Kramer's beautifully illustrated book “Noodlephant” is about a bunch of despotic kangaroos, who take over the production and distribution of noodles, much to the chagrin of noodle-loving elephants and other critters. It is a story which has a social message—and Kramer, as an activist, is very much into this kind of narrative. Kramer opined, "Kids have a natural interest in what's fair, and what is not. So this kind of theme will appeal to them."

Kramer also wrote a light verse book that he calls “Critterverse.” He feels light verse is sometimes looked down on as too shallow or trite, but he finds that it can be a teaching tool for kids, as it mixes easier and harder words. Kramer feels the kids will understand the harder words through the context of the story. He believes that kids are intuitive, so they don't always need a parent next to them to explain things."

The illustrator Kramer often works with is K-Fai Steele. Her vivid and colorful work goes well with the inventive text.

Kramer is a man with many interests. He was a founding member of the Union Square Neighborhood Council, and has worked to make sure that the community's interests are met by the developers of Union Square.

Kramer told me he is writing a sequel to “ Noodlephant, "Okapi Tale," and if I were you, I would secure an advance copy as soon as they are available.


To find out more about Kramer go to:
http://jacobkramer.com
Doug Holder at 3:36 AM No comments:
Share
‹
›
Home
View web version