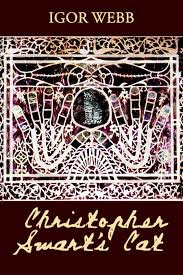 This is not a book about a cat. It is an autobiography…sort of. It is also something of a travelogue-- a rumination through literary minds that the author either knew or was attracted to. It is not a chronological journey so the reader has to relax and go along for the ride as Webb tells of his Jewish family’s displacement in 1943 from the village of Malacky (pronounced Malaski) in Slovakia after his grandparents were taken by the Nazis and their sojourn via Ecuador to New York City. He tells of his youth in the Inwood neighborhood where his mother insisted that he pass as a Christian. Being accommodating he became immersed in the Catholic Church somewhat to her chagrin. Webb went on to study at Stanford and do graduate work in London and at some point thereafter became friends with Phillip Roth.

The book is also something of a personal journey in which Webb visits Malacky as if he is trying to gather something of his roots. He describes interesting adventures while there --with references to various village characters from his youth, his family and the surroundings. These stories are told by Reza, his mother’s sister or cousin or someone ,who is perhaps the most interesting character in the book, but as the reader will discover in a footnote on the very last page also is fictional.

Along the way the reader will bump into not only Phillip Roth but Jorge Gorges, Virginia Woolf, Tomas Wolfe, Victor Hugo, W.G. Sebald, Danilo Kis, Milan Kundera, and Ivan Klima either in a personal way or through Webb’s ruminations on their works or their personalities. And of course the reader will be exposed to Christopher Smart and his works. Smart was a perhaps brilliant poet in England in the mid 1700s who had the misfortune to be odd and frequently in debt. Both of these conditions resulted in his imprisonment several times during which he produced widely acclaimed works such as A Song To David and Jubilate Agno as well as anthologies to his cat Jeoffry. (This seems to be the only rationale for the title of the book.)

Webb reflects on various passages from these authors as a memorial or perhaps in a philosophical discourse, and hones in particularly on Smart.

Reading this book is an interesting but perhaps tiring endeavor as Webb jumps forward and backward as thoughts and recollections seemingly strike him. Along the way he just jumps into whatever writer’s work seems applicable to those thoughts, and those may lead to tangents and then back, or perhaps not. At any rate do not try to anticipate where this book is going. It will get to the end simply because it is time to end and not for any other reason.
Doug Holder at 7:08 AM No comments:
Share

Wyn Cooper has published five books of poems, most recently Mars Poetica. His work has appeared in Poetry, Ploughshares, Slate, and more than 100 other magazines, as well as in 25 anthologies of contemporary poetry. His poems have been turned into songs by Sheryl Crow, David Broza, and Madison Smartt Bell. He has taught at Bennington College, Marlboro College, the University of Utah, and at The Frost Place, and has given readings throughout the United States as well as in Europe and South America. He is a former editor of Quarterly West, and the recipient of a fellowship from the Ucross Foundation. He worked for two years at the Harriet Monroe Poetry Institute, a think tank run by the Poetry Foundation, and now lives in Somerville, Massachusetts, where he works as a freelance editor.

A bass drum’s beat
wakes her in the night.
She goes to the window,
looks out and sees nothing,
but the pounding continues.

She hears her heart
above the noise of fans,
crickets, the refrigerator
that keeps her wine cold
as the night she met him.

He didn’t look like a drummer
or act like one, no hands
beating time on the table
in the tiny dark bar
he took her to twice.

Time waits for no one,
he said, and she thought
Stones but didn’t say it,
just played it straight
as he sang her praises.

He never called back,
just sent a postcard
that said Still drumming.
Doug Holder at 6:39 AM No comments:
Share

Interview with Somerville Poet Dorinda Hale: Author of 'Disorientation and the Weather'

Interview with Somerville Poet Dorinda Hale: Author of 'Disorientation and the Weather'

Poet Dorinda Hale arrived at my table at the Bloc 11 Cafe with a frosted pastry of some kind and a rich, roasted coffee. Hale, who has lived in Somerville since 1974-- was here to talk about her first book of poetry released by the Finishing Line Press, “Disorientation and the Weather.”

Hale is originally from a small town in Vermont—and when she moved to Somerville back in the day—she found a neighborhood that was peaceful and quiet much like her seminal grounds in Vermont. Hale told me, “ Somerville is a good place to be. It is a community I feel very comfortable with.” In terms of gentrification of the city she told me, “ It's great to see all the new babies around town. Gentrification has been responsible for increasing the value of my home. However, it saddens me how everything is so expensive now. I hope the new influx of people will have the same emotional commitment to the community that I experienced decades ago.”

Like many poets Hale has worked a number of different gigs over the years. In the course of her varied career, she has worked as a manager of a commercial translation project for Kodak, she had a stint at a junior college, and worked as a freelance editor. She wound up working steadily in the high tech sector until she was laid off.

After leaving the tech industry she asked herself, “ What's next?” She has been writing and publishing for years. Her work has appeared in such journals as the Atlanta Review, The Wilderness House Literary Review, and elsewhere. So she decided to put together a book-- thus this new volume.

I asked Hale about one of her poems in her new collection, titled “ After Grief.” She uses a repeated line “swell of light” in this highly structured villanelle, which is is a nineteen-line poem with two repeating rhymes and two refrains.  Hale said of this poem, “It reflected how I felt at my brother's death, and that “swell of light “ that repeatedly turns up in the poem is all about the connection with the dead.'

Hale works with both free verse and rhyme. She said, “ I write a lot of free verse too, but I I like the challenges of rhyme and formal meter.”

I asked Hale, "Why should someone read your collection. She replied, “ Because they will feel better. They will find psychological states that are hard to describe-- but are familiar. When confronting pain and expressing pain in the poem—well--it can bring comfort.”

Hale told me she will be speaking at the Harvard Memorial Church. She will answer a question posed by the minister of the said church after he perused her book-- "What do we owe the world?"' And I just bet that Hale has the answer.

She remains in place, a site
and keeps her body with him
unbroken in a swell of light.

He’s leaned away, though not in flight
hears a cadence meant for him
yet remains in place, a site

bold and burnished, hers despite
the keen constraint, the spell of rhythm.
Unbroken in a swell of light

our dead can sing to us, invite
a waning heart to shelter: an interim
that remains in place, a site

where porous love may dwell. What sleight
of hand unveiled this layered scrim
now unbroken in a swell of light

and let the soak of ties outright
claim her, hold him, allow them
to remain in place—a site
unbroken—in a swell of light?

Debris is L.M. Brown’s first novel. It is a coming-of-age story of two teenagers whose lives intersect and who bond over tragedy and family secrets.  The novel’s title is based on a poem by an Irish poet, Lola Ridge. The poem begins: “I love those spirits/that men stand off and point at/or shudder and hood up their souls…” In Debris, a fourteen-year old boy, Andre, and a fifteen-year old girl, Erin, are obsessed with mothers who have died or disappeared. This obsession sometimes takes the form of seeing and feeling the spirits of their mothers and Brown makes reference to mythological Irish figures that add to the atmosphere of the novel.

In the US, we have this societal bias against grieving. If someone dies, we are expected to be sad for a brief period of time and then to get on with our lives. We tend to focus on the future rather than the past. Our instant gratification culture encourages us to stay-tuned. Otherwise, we might be plagued by FOMO.

When we lose people close to us though, we don’t forget about them. They remain with us and continue to affect us. Brown is good at delving into this notion. Her main character, Andre, has problems at school and can’t face his own father because, when Andre is involved in a car accident that kills his mother, he blames himself and he believes his father blames him, too. As a result, he leaves the cushy confines of the big house owned by his successful father and moves to a house in a development to stay with his aunt and go to a different school.

There he meets the beguiling Erin whose mother disappeared the year before and who lives with her alcoholic, somewhat abusive dad. Erin wants to find out what happened to her mother. Did she run away? Did her crazy father kill her and bury her in the garden? Erin and Andre are both outsiders. Erin doesn’t go to school and she gives Andre a place of refuge while he slowly comes to terms with his mother’s death and helps Erin solve the mystery of her mother’s disappearance. Along the way, they deal with some nasty local hoods.

The author lives in Massachusetts but has a close affinity with Ireland. The characters speak with Irish accents and the setting and time period are a little hard to pin down.  That fits in with mysterious atmosphere of the novel. Brown has also written poetry and she is capable of writing a good sentence. This is the beginning of the novel: “From Eugene’s house the sea was audible and across the garden’s stone wall the dark surface lit by stars was still as glass.”

She is also adept at using third person omniscient to explore the thoughts and complexities of her characters.  She creates characters who sound like real people. The novel does feel somewhat claustrophobic sometimes moving minute by minute through the thoughts of the characters. The plot plays second fiddle and this reader found himself questioning credibility as the novel went along. Do boys really slap other boys? Didn’t a certain neighbor disappear at the same time as Erin’s mom?

I have a couple of minor quibbles. The novel has an editor who apparently has trouble with apostrophes: Ines arms, Ines’ hands, Ines’s dad all appear within two pages. Maybe Cormac McCarthy is right in thinking we should just get rid of apostrophes. There are letters missing here and there, a few run on sentences and occasional confusion regarding point of view.  Finally, the font appears to be 10 point, single-spaced with half-inch margins. This allows the publisher to get as many as 500 words on a page. That’s why the novel is a mere 156 pages. With more conventional formatting, it would work out to well over two 200 and would be easier on the eyes.

Nonetheless, Debris is a promising first novel and well worth a read this summer.
Doug Holder at 11:52 AM No comments:
Share
‹
›
Home
View web version