Ed Meek is the author of the poetry collections "Spy Pond" and  "What We Love." He also has a collection of short stories out titled, "Luck." Ed has recently joined the staff of  "Ibbetson Street" as a managing editor.

--Silence is so accurate (Mark Rothko)

Silence is so inaccurate.
It is the sense of absence
when someone is gone.
It is the ellipsis at the end of the story…

It is not the comma, but the period.
It is the break at the end of the end-stopped line.
It fills the spaces between the fingers and toes.
It is the hesitation before you choose:

the interior sigh whenever you lose.
The empty room after the door closes;
It is the blank page, the white space.
It is what remains unsaid.
Doug Holder at 6:40 PM No comments:
Share

A Word For It, poems by Warren Slesinger 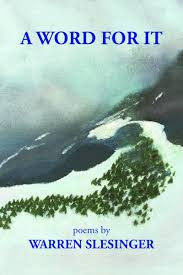 One way to consider poetry is as an attempt at exactness of expression. It consists of le mot juste as the French call it when it captures a thought or feeling. “This is the hour of lead,” says Emily naming the feeling that follows a death or “great pain.” Dylan Thomas reminiscing about his childhood says, “Time held me green and dying/ Though I sang in my chains like the sea.” Warren Slesinger takes the idea of poetry as a means of defining words and feelings and runs with it. This slim volume has twenty-six poems arranged in alphabetical order (of course). Each poem begins with what sounds like a dictionary definition expressing form or function.

Glass (glass) n-es 1. A miracle that occurs
in the mineral world when a white hot mass
of silicates, oxides and potash fuses to form
a bright and brittle substance that is clarity
itself: a thin, square, rigid pane of glass

Slesinger goes through four definitions concluding with an example:

… 5. An object
made wholly of glass; hence, its’ contents:
Before he sipped the bubbles of champagne,
he raised his glass: “To Life!”

So, although the poems seem like dictionary definitions, the lines are arranged as a poem with attention to sound and rhythm and there’s a leap, as Robert Bly would say, to something insightful and often surprising at the end of the poem. You may have noticed the apostrophe after the s in the word “its.” There are a number of those in the book along with quite a few typos: a K missing from Knowledge, an e left off of secrete, an r missing from sandpiper. There should either be a comma or a hyphen between white and hot in the above poem. Proofreading is going the way of the dodo.

Some of the poems are self-contained and funny like this one called “Shirt.”

Shirt (sh.irt) n-s 1. An
article of clothing with
a buttoned frontal
opening, two sleeves,
a collar and a tail for
tucking into the trousers
thereby covering the
buttocks and the genitals.
2. One’s most prized
possessions. Self-
composure when exposed
to risk or injury: keep
your shirt on.

A few poems make political statements. It appears that the United States has finally woken up (or is woke) to the notion that poetry can be political. This poem is called “Vapor.” It succinctly captures the awful nature of the current state of warfare.

Vapor (vay.por) n-s 1. Something
in the air: a mixture of suspended matter
that makes it difficult to see down the street
in Baghdad. 2. A mist with a man in it.

Vaporize: (vay.por.ize) v. 1. Only
to convert into a vapor with the heat
of a high explosive. 2. To detonate
a mess of manhood high-strung on hate.

Vaporous (vay.por.us) adj. 1. What
is collecting in a cloud of Middle-Eastern
malice. 2. Rising from a blast of body
parts on the ground.

Many literary magazines today are obsessed with experimental hybrid forms that are often just a mash up of poetry and prose. New rule: art must evidence some skill in order to be considered good art. Slesinger’s approach succeeds at being experimental. Well worth a read. Just don’t pay any attention to those typos.
Doug Holder at 4:06 AM No comments:
Share 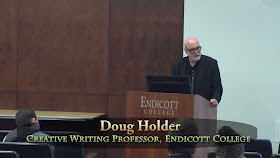