Susan Hankla lives in Richmond, VA. She teaches adult writing classes at the Visual Art Center. Groundhog Poetry Press LLC just published Clinch River, her debut collection of poems. Burning Deck Press published her chapbook, I Am Running Home. Other works are in Gargoyle, Beloit Fiction Journal, Michigan Quarterly Review, Blue Mesa, Artemis, Hollins Critic, Open Places, Southern Poetry Review, Poetry Northwest and the New Virginia Review. Recipient of a Virginia Commission on the Arts Grant for Fiction, and of a fellowship to attend the Frost Place, she has enjoyed being a fellow many times at Virginia Center for the Creative Arts and a summer presence at Fine Arts Work Center in Provincetown, MA. A graduate of Hollins University, she has an MFA in creative writing from Brown University.

to bleed the meat

On the outdoor table,

Once you have seen a beheading,

you will never again

Now the body’s upside down

strung from the clothesline

The Lynching of Leo Frank Zvi A. Sesling 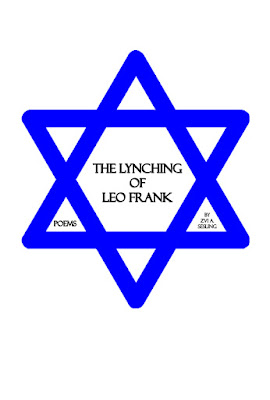 Leo Max Frank (April 17, 1884 – August 17, 1915) was an American factory superintendent.  Born to a Jewish-American family in Texas, he was raised in New York and earned a degree in mechanical engineering from Cornell University before moving to Atlanta in 1908. He became involved in Atlanta’s Jewish community and was elected president of that city’s chapter of the B'nai B'rith.

Mary Phagan – then only 13 years old - worked at National Pencil Company, where Frank was director.  She was strangled on April 26, 1913, and found dead in the factory's cellar.

Leo was charged with, and – after a hasty trial (less than a month from the opening of the trial to conviction) – convicted of, her murder. Georgia’s Governor commuted Frank's sentence from capital punishment to life imprisonment.

On August 16, 1915, Frank was kidnapped from prison by a group of armed men and lynched at Marietta, GA (Phagan's hometown). The new governor vowed to punish the lynchers, who included prominent Marietta citizens, but nobody was charged with Frank’s murder.  Ironically, Frank’s lynching was the impetus for the creation of B’nai B’rith’s Anti-Defamation League in October 1913.  It also resulted in the exodus of around half of Georgia's 3,000 Jews.

In 1986, the Georgia State Board of Pardons and Paroles granted a posthumous pardon to Frank, but did not officially absolve him of the crime.

From these horrific facts – the stuff of Dreiser or Thomas Hardy novels – Zvi Sesling has woven this devastating series of poems.  The poems begin - innocently enough - with recollections of (Sabbath & Passover) dinners and other meals with friends and family members.  (In Jewish culture, food is never too distant from faith and observance.  Indeed, we have detailed treatises on what may and may not be eaten.)  From these recalled meals, Zvi moves on to the shul (synagogue) – situs of sins and forgiveness – including one (in Saint John, New Brunswick) now for sale.

Then, Zvi turns to the tragic story of Leo and little Mary.  He captures in verse what cannot be fully captured in prose – the inexplicable (but, nevertheless, all encompassing) hatred which led someone (not Mr. Frank) to strangle Mary’s young life, and which led others to later strangle Leo’s.

The poems in this collection also concern other, more wholesale slaughter of Jews – not limited to an isolated lynching.  Oceans of ink have been spilled – like wine poured out at Passover – over the atrocities of the mid-20th Century.  Zvi’s writing is a notable tributary, worth traversing.

The remainder of this powerful collection is concerned with the poet’s wrestling with his Jewish identity – a fitting coda to a poetic eulogy for a man hung due primarily to his.  For anyone interested in a dark moment of American history – or curious about how we find (or obscure) our identities (an issue not limited to those of a certain tribe) – this collection is highly commended.

When I read (and wrote my review of) this excellent poetry collection by Zvi Sesling, I could not imagine that torch-bearing (albeit Tiki torches) neo-Nazis and their sympathizers would march in Charlottesville, VA chanting "Jews will not replace us!" or uttering the hateful slogan "Blood and soil" (the Nazi etymology of which, I suspect, was unknown to many shouting or hearing that phrase).  I could imagine even less that a sitting President would fail to immediately and vigorously condemn such actions.

These recent events make the memory of past events - such as the trial, hasty conviction and lynching of Leo Frank - all the more compelling.  For we cannot begin to comprehend the horror of the present if we fail to grasp its antecedents.  They do the same for Sesling's haunting poems based on those events.  As Faulkner said, "The past is never dead.  It is not even past."

The event will be held October 5, 2017 at Endicott College as part of the Endicott College/Ibbetson Street Press Visiting Author Series. 12:30PM. Open to the public.  The series is curated by Professor Doug Holder.  http://endicott.edu   http://visitingauthorseries.blogspot.com

Filmmakers Carey and Hillringhouse bring the outsider poet Malcolm Miller back to life in this riveting documentary. Miller found early success with his poetry and a close friendship with McGill classmate Leonard Cohen, but later succumbed to mental illness and obscurity and living a life on the margins. In spite of his struggles, Miller left behind over three thousand poems. After his death in 2014, retired Salem State Professor and writer Rod Kessler who befriended Miller in the last year of his life, took it upon himself to sift through the body of Miller’s work and tell his story through a series of interviews with the people who knew him. The film also showcases Miller’s poems with readings by local poets in various locations across his hometown of Salem, Massachusetts.

Kevin and Rod will show an edited version of Unburying Malcolm Miller and will take questions about the making of the film.
KEVIN CAREY is an Assistant Professor in the English Department at Salem State University. He has published three books – a chapbook of fiction, The Beach People from Red Bird Chapbooks (2014) and two books of poetry from Cavankerry Press, The One Fifteen to Penn Station (2012) and Jesus Was a Homeboy (2016) which was recently selected as an Honor Book for the 2017 Paterson Literary Prize. Two poems from this collection have been featured on The Writer’s Almanac. Kevin is also a documentary filmmaker. His latest project Unburying Malcolm Miller, produced with Mark Hillringhouse, premiered at the Mass Poetry Festival on May 5th Kevincareywriter.com

ROD KESSLER's short story collection, Off in Zimbabwe, won the Annual Series Award of the Associated Writing Programs in 1984. His stories have been anthologized in The Literary Dog and Flash Fiction. He is a past director of the Eastern Writers' Conference at Salem State College (now University), where he edited The Sextant, the faculty magazine, and Soundings East, the literary magazine and was a longtime (1983-2014) professor of English and Coordinator of the Creative Writing Program. Since his retirement three years ago he has been concentrating on preserving the writing of Salem poet Malcolm Miller (1930-2014).

Hey the new issue of The Somerville Times is out!

Love and friendship in times of license and freedom often go amiss, derailed by life’s pedestrian complications. Prescribed relationships, on the other hand, monitored by their context in society and tempered by existential considerations or overarching cultural institutions reduce the tragedy and drama in everyday life to an acceptable expectation level. There’s the rub. Unpredictable extremes of behavior make life not only more interesting, but also, infused by unwieldy passion, more creative.

In this dual publication Starving Moon/ Millennium Resolution writer Luke Salisbury and poet Jean Dany Joachim set up a compelling proposition and a stunning response with verve and spot-on tonality. Salisbury expertly provides the proposition in the form of a well-wrought short story. Joachim completes the narrative with a free verse poem that delivers an odd but very unique physicality. Together both literary pieces combine into a rather heartfelt, unified, and, more importantly, mesmerizing story.

The action takes place “in the summer of 1972, which was really the last summer of the sixties.” Sex, rock and roll, some drugs, and a lot of booze abound. Primarily Salisbury chronicles two couples in their evolving/ devolving relationships: Mark (the narrator) and his new love, Carol; and Peter and Gretchen, the star-crossed couple. All have histories, although Gretchen’s is particularly vague. Damaged people meet lesser damaged people and cling. Doo-wop, Del Shannon, and Sam Cooke are piped into the mnemonic sound system at appropriate times adding to the texture.

While one relationship evolves, the other is toxic and spirals downward. True love offers up the irony, since both relationships have it. Friendships are woven-in complications. The character of Carol really amuses me. She is a straight-talking corrective to her boyfriend, Mark the narrator. I must say, this plot line works wonderfully well.

One exquisite section of prose sticks with me as I write this. Salisbury speaks of love’s demise not as a loss of sentiment and passion, but rather the dissolution of a dynamic, a world view. He explains that everyone knows this to be true. That seems right somehow. Here’s the section,

… Time is dead. The
person you love, the person you know, isn’t there
anymore. Isn’t here. Isn’t yours. You’re not really
here either. You’re in limbo because you’re
together but you’re not. You’re alone. But you’ll
be more alone. You hurt. But you’ll hurt more.
The past won’t save you. Things don’t work
anymore and you can’t do anything about it. The
person you love, the body you can’t imagine being
without or touching someone else, is a ghost. You
touch it but you aren’t touching it. You’re a ghost.
Objects, chairs, cars, snow, don’t look the same.
Buildings, trees, the sky, get super real. The
outline of things gets too sharp. You know what’s
coming…

Just how alone are we in this world? Salisbury pretty much ends his story meditating on this question. His protagonist/ narrator watches through memory’s window as life’s stories replicate, perhaps changing slightly, over twenty years until things make sense. Although this narrative is far from being a comedy, it does have a comic outlook where acceptance, not remedial change, proffers resolution.

Embedded in Salisbury’s short story, Joachim’s poetic persona comments through the medium of his poem, entitled Millennium Resolution, identifying with one of the characters, Peter, and vowing to change the pattern of his own life. In the background bells toll from the tower of Trinity Church on St. Catherine Street in downtown Montreal. Consider these lines in the heart of the poem,

I was already swallowed by the “Starving Moon”
A cold chill filled my whole body,
That kind one experiences in very scary moments
The same kind immigrants often feel
When dealing with immigration agents
I discovered myself in the pages of the story:
I had Peter’s face
So obsessed with doing the right thing,
And wanting to be Jesus too—In this fast moving
World.

The poet ties himself even closer to Salisbury’s Peter character in the penultimate stanza of his piece. He signals a new understanding before the millennium,

Peter went to another woman,
Peter went back to Gretchen,
And Peter never noticed Peter
The way I missed myself for so long
There were only two rings left
Of the twelve sounds of midnight
The first hour was almost final…

Both Salisbury and Joachim are well known literati in the Boston area. Salisbury is the author of Baseball Is the Answer and three other works of fiction. Joachim is a past Poet Populist of Cambridge, Massachusetts and the author of three collections of poetry. They are currently selling this book at readings. If you are in the northeast area, track them down. For God’s sake stalk them. Get this book.
Doug Holder at 11:01 AM No comments:
Share
‹
›
Home
View web version