Somerville writer Randy Ross didn't need an agent because he sold his book on his own to a willing publisher.  The novel, “God Bless Cambodia” reached fruition through a long and arduous process. Ross, a man lingering on the cusp of 60, met me at the Bloc 11 cafe on a rainy, late spring morning. Ross is resplendently bald ( like yours truly) and has a lot of nervous energy and a quirky sense of humor.

Ross had a long road to publication—it took him seven years. The book, " God Bless Cambodia,” which Ross describes as a travel/literary/mystery was sent out to agents that Ross met at Grub Street (a literary center based in Boston). He wound up sending the book out to well over 100 agents and when that did not produce the desired results he sent it to a number of small presses. It was picked up by a small press in Long Island, N.Y.--run by a couple in their 80s.

Ross—for many years worked as an editor at PC World—but he quit that to pursue his writing and performance career. He had a sort of early version of “ God Bless Cambodia”-- a chapbook of sorts--- “ The Chronic Single's Handbook.” It was developed into a one man play—which he has performed at various fringe festivals, including the iconic one in Scotland. In preparation for this venture Ross took acting lessons to perfect his craft.

The “Chronic Single's Handbook” is based on Ross' travels in Asia after he quit his job at PC World. It came from his posts on his blog, “ Kvetching.” Ross told me, “The story basically dealt with my travels in Asia after I quit my job of many years. The character is looking for love—(or at the very least to get laid) and hopes for some kind of change. Unfortunately he comes back very disillusioned.”

Ross said he still performs around the country, and from time to time he lectures about the ins and outs of getting published. Now and then Ross teaches memoir writing. I asked him what are the essentials of writing a good memoir. He stated, “ A memoir is similar to fiction. You need a plot—not your whole life story—but an event or series of events that are interesting or revealing. Also standard elements are dialogue, good characterization, and some sort of theme.”

Ross has lived in Somerville since 1999. He likes the city—but said a number of his friends had to move out because the high rents of apartments, as well as exorbitant  home and condo prices. He also reflected, “ I'm not young and hip anymore—and that seems to be the prevalent vibe in the city.”

Ross has no regrets about leaving his high paying job at PC World. He lives on his savings—has taken the occasional consulting gig and lives frugally. He is in the process of writing a second book that deals, as he describes it as the dilemma of  “ men as victims.” He told me “ It starts out at a poetry reading at Whole Foods. It is about an angry middle aged white man taking a stand for—well--middle aged white men.”

Ibbetson Street 41 has been released!

TO ORDER GO TO:
http://www.lulu.com/shop/doug-holder/ibbetson-street-41/paperback/product-23210808.html 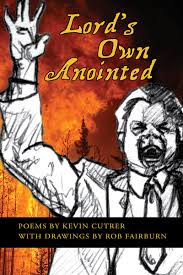 Like a 2 X 4 to the head Kevin Cutrer’s new poetry collection, Lord’s Own Anointed, gets your attention fast. Set in rural Louisiana, Cutrer’s lyrics preach everyday Southern life writ both large and small. He marbles in pointed comedy and homespun wisdom. His subject matter is the human condition and his regional angle works wonderfully well. The riveting drawings by Rob Fairburn, who hails from the same small town as Cutrer, capture the poet’s tone perfectly.

From the opening poem, entitled Sounding Out, Cutrer harnesses a wide range of emotions to buttress his mature arguments. Here he narrates his persona’s travails as a slow learner and, concomitantly, the rote methods used by his scowling, scary, overworked teacher. His mother supplied the antidote of love and patience. Listen to these first affecting, then magical lines,

I don’t know how others learned
but in my case my mother taught me
into the evening… a boiling cauldron
of butterbeans on the stove, that hated meal
which nourished me whether I wanted it or not;
the phone ringing so loud, so often, I thought
it would lose its voice the way I could shout
my own away. A sound that smarted, the little clang
lingered in my ears like a burn. The business line.

Even as she repeated yes and no
to the caller, she tapped the page gently
where I should pencil in, with one
of those thick, soft-pointed pencils
given to children (Merlin’s wand at playtime)
letters that spelled my primer’s totems,
the cat and dog, the happy family.

Lord’s Own Anointed, Cutrer’s title poem and my favorite piece in this collection, does double duty, detailing the divine madness of preacher and poet. Henry Hebert, the protagonist, is not quite right. Not unlike a few poets that I know. Bug-eyed and bulbous, Henry proffers an absurd appearance. But he has “the spirit” and his words matter. Cutrer concludes the piece describing pure artistry generically this way,

Our preacher calls on him to pray each Sunday,
and every time he has a different prayer
more blessed than any message that young pastor
with all his years at college could invent.
He prays with all the energy a workingman
puts to his pillow every night to sleep,
that hard-won peace that only comes from struggle.
His words step slowly like a man who winds
on through the wilderness without a trail,
sure of the right way, moving tree to tree,
humming to free his spirit from the thick,
and sentence after sentence simply sings.

If it wasn’t so horribly sad, Cutrer’s poem entitled Fall On Your Knees would be hilariously funny. Santa Claus shows up at Shorty’s Tavern, a local bar, jolting childhood memories from the protagonist, who is drinking up a storm. A father/ son relationship hangs in the balance. Mortality and life’s meaning (if any) are considered. I teared up reading the last stanza of this poem. That’s a first. I won’t spoil it by quoting; it needs the whole poem. Here’s another section addressing Santa Claus at the heart of the piece,

You know, my father always wanted us to believe
in you, and every year he had a scheme
to put out all our doubts once and for all.
One Christmas morning there were reindeer tracks
out in the front yard where the grass was thin
and it was muddy from a thunderstorm.
Well, that was all the proof it took for me.
Later I learned he’d sawed a hoof from a buck
his buddy killed, to fake those tracks. He went
to all that trouble just to fool his kids.

Brother love can be a complicated affair. In the piece Phil Kills the Neighbor’s Dog on Easter Sunday, Cutrer infuses his versified argument with passion, shame, and internalized anger (You can literally feel the acid burn.). Then he nails it. Consider these concluding lines,

There wasn’t any call for it,
but there it was. You can’t pretend
it hadn’t happened when you’d seen it.

Forgiveness is a lie we tell.
Sometimes there ain’t no other way
To live, but live by lies we tell.

After what he’d done, what to do?
The men, we just stood around and spit.
The women tore him up like panthers.

Perhaps the strangest poem in the collection is Truck Stop Chapel Testimony. It works as both a page poem and a performance poem. In fact I’ve seen the poet read this piece at the Hastings Room Reading Series in Cambridge Massachusetts. During the performance he morphed into a latter-day Elmer Gantry, stretching his repentant hands out of hellfire towards heaven and undeserved redemption. Cutrer’s preacher rails against the Prince of Darkness,

Sins are hard-headed, my repentance limp.
I’d turn a week’s pay into a letter to Penthouse,
then weep clean the taint of my crimes, and worse:
I’d skip and sing the wide road back to go romp.

From his couch stained with evil, Satan-times-3
addles me to bad my good, turn rights to wrongs.
He holds my steel will-power in his tongs
to weld all kinds of wickedness to me.

After reading this volume, grace (or presumptuousness) from the almighty (or the infernal one) descended (or ascended) upon me and I immediately reserved a retreat room in a Cistercian monastery located in the American South to deal once and for all with my unholy shortcomings. Cutrer is that good.
Doug Holder at 8:53 AM No comments:
Share
‹
›
Home
View web version