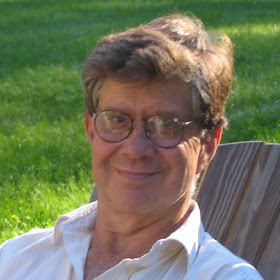 Llyn Clague is a poet based in Hastings-on-Hudson, NY.  His poems have been published widely, including in Ibbetson Street, Atlanta Review, Wisconsin Review, California Quarterly, Main Street Rag, New York Quarterly, and other magazines.  His seventh book, Hard-Edged and Childlike, was published by Main Street Rag in September, 2014.  Visit www.llynclague.com

Hunger In A New Yorker Poem

Visual, sensual, genteel,
the poem “Quahogs” in this upscale
mag jogs forward in a tide-steady
rhythm, measured, controlled,
describing clamming by the sea.

Auditory, olfactory, tactile,
in verbal as well as physical
markers, the verse progresses
from tidal flats to rake tines
to the character and color
of the shells: “Opal or pearl …,
their whorls and purple stains.”

Compact, concrete, picturesque:
it’s a best-of-friends evening
scene, with the “sky blazing,
its sinking orange fire.”
With even “the air in savor,”
delightful “precious butter”
drips on “the succulent
of the freezing dark sea.”

Sandily gritty, precisely
specific, grandiosely
the poem raises its sights
from one night’s appetite
for clams and friends by the sea
to the notion of a durable,
universal human hunger,
a “domain immeasurable.” 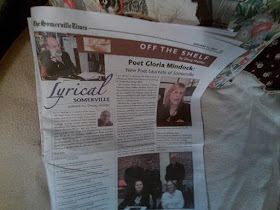 The new Poet Laureate of Somerville, Gloria Mindock writes, " I will serve the Somerville community with regular office hours, hosting a poetry round table open to all writers, workshops and readings for the elderly, poetry with puppets for children, readings and an informative talk about El Salvador’s civil war and the Salvadoran writing today in our community, and the giving away of free books throughout Somerville as part of Read America Read. I look forward to representing the city of Somerville for the next two years.

"Zachary Bos studied poetry in the graduate creative writing program at Boston University. He is editor of nerobooks.org. 'Conscious Explanations' by Mark Schorr was the first book published by his Pen & Anvil Press."

Now look with me away from this screen where
I have just read my friend this morning died.
Let us look through this window, through the air
that carries the scent of marsh mud and salt
as it combs across the marsh at low tide.
We are high here, and on an upper floor,
and down away from us the rows of hills
melt into the distance, becoming more

soft and gray the farther away they are.
Fog softens them too, removes their features.
The winter rain rubs them smooth. All nature
winds itself down as it moves. Years of rain
wash the gilding from the grooves of the names
carved into the stone of our monuments.
What we leave out gets lost, erodes away
and decays. What does remains are stories.

Their gold is renewed with each retelling.
They are kept safe in the confines of all
we sing or say with sincere meaning. They
are beyond the reach of rust, just as safe
as the dancing aurochsen breathed upon
the caverock walls by those ancient painters
who knew we must keep inside what we want
to save from weather and oblivion.