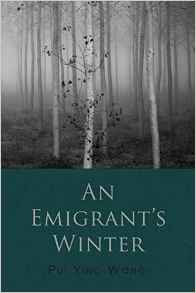 Small moments in the starkness of infinite space create their own palace of eloquent imagery in Pui Ying Wong’s An Emigrant’s Winter. Stringing a plethora of similes together, Wong constructs her architecture of muscular arches, lyrical spires, and exquisitely positioned lattices within her picture-perfect stanzas and flowing icicle-laden lines. Indeed, each multi-sided poem seems to defy gravity by rising above us into the frigid atmosphere of faceted and timeless exhilaration.

Something about the color pink on walls forewarns of troubled distractedness. Wong’s collection opens with The Pink Apartment, a piece set in Sai Kung, a Hong Kong township. The author’s persona considers with telling clarity her geographical relationship with her native environs. Here she confronts the ambiguity of origination,

I was a stranger at home.
I walked among
the neighbors, quiet
as an unstrung guitar.

I waited for the bus, greeted
by commuters wary like moles
caught in the sun, nothing
could assuage them:
not morning’s pure light,
not their own dreams.

Mnemonic wanderings in the dreams of emigrants both unsettle and reassure their hosts. In the title poem, An Emigrant’s Winter, Wong visits the phantoms of her past in a land frozen in dream-time. At the heart of the piece the poet observes from an intellectually connected, but emotionally isolated angle,

Icicles teethed along the power line,
I opened my mouth and my speech stuttered.

The entire city lived in a snow globe,
even big men trod timidly in the wind, hiding their faces
like shamed felons caught by the TV camera.

The market sold out of everything,
a young boy the last pack of meat.

Sleet fell all night, tapping
on the windows the way the dead might.

In my dreams I went back to the house
that had forgotten about me,
no one there asked how I’d been.

But I sat with them just the same

Wong’s poem Elegy For The Snow Country alludes to the power of literature on a young, uncluttered mind. The poet recalls images of pure desperation from Yasunari Kawabata classic Japanese novel Snow Country that she had once read. Snow falling endlessly, she drifts into thoughts of her own and her son’s first snow experience in a new country and then follows her own musing into an earlier, albeit internal, setting. Interestingly, she describes herself as “like a pilgrim” on a road of pure language. Wong concludes her piece this way,

What other road if not language
that can take us back to these moments,
to childhood, that first country,
surrounded by savage blue and steep inclines?
What burns cannot be touched but remembered.
What burns in this enigmatic life speeds before you
like a train trundling out of the tunnel
into a valley cold with stars.

Small Moments, Wong’s lovely poem of emblematic images, details in miniature what the rest of her collection does painted large. Her clarity of language and polished similes are particularly striking. Her pieces, like a charm bracelet, seem to be independent from one another except for a framing image of a girl learning to ride a bicycle, which she divides into two separated stanzas. The tone and the outcomes that Wong delivers remind me of the imagist poets Hilda Doolittle, Amy Lowell, and even a bit of Ezra Pound. Consider these sections,

At dawn, the train collects
the commuters like debt,
returning them in the evening
gleaming of sweat.

Noon, young mothers
sip coffee in outdoor cafes,
united by their fidgeting babies,
lack of sleep and
a distraction that has no name.

On the ground of the VA hospital
the gardener with a hose
harbors a spray of rainbow
as if it were a love letter
from the front.

My favorite poem in this collection Wong entitles The Search. The piece daubs one with a strange duality of tone. The narrative background appears claustrophobic and bolted in place, yet the lyrical overlay soars with magic. This tonal counterpoint works really well, even as the poem ends darkly. The middle stanza conveys a mix of faith and abnegation,

Moonlight falls like a bolt
of silk. On the moon’s face
the blotches are the ones
we see all our lives.
No longer do we believe
in the moon goddess
who night after night
mixes potions to make us
well. What good is her benevolence
if it won’t return the ones we lost?

Wong’s master poem, In the Shadow of Pagodas, astonishes with its narrative pull and lyrical lift. The poet tells the story of the first emperor of China, Qin Shihuangdi, and his doomed court with versified aplomb. Man’s divine pretenses in the form of art rise off these pages and flit before us in a wild pre-blizzard warning. Illusion breeds dream breeds illusion. Replicas become more real, more permanent than their creators. Wong describes the emperor’s terra cotta army that accompanied him into the presumed afterlife this way,

Without armies there would be no empire—
generals, warriors, archers,
bowmen, infantrymen,
even if they were made of clay.
Figures varied in size, poise,
painted in resin, lacquer,
their color bright,
their faces individual
as if each were bestowed a spirit,
each could breathe, could kill.

Not only does the poet deliver philosophical depth and original images in this collection, but she also gives us an emigrant’s perspective on traveling to and from her new homeland. Wong’s poetic journeys shake us from sleep with their wintry briskness. Truly, it’s eye-opening to travel with her.
Doug Holder at 1:08 PM 3 comments:
Share

I am pleased to announce that Gloria Mindock, will succeed Nicole Terez Dutton as Poet Laureate of  Somerville as of Jan. 2017. The Laureate Panel, that consisted of Harris Gardner, Doug Holder, Kathleen Seward, and Glenn Ferdman, had a hard choice to make, but we are confident that longtime Somerville resident/poet/publisher/activist Gloria Mindock is the best choice. The notable runner ups were Kirk Etherton and Ralph Pennel. Mindock has a long history as a significant literary figure in Somerville, and has provided venues for readings for many years.  In terms of outreach, publishing, and promoting, she has few equals in Somerville.  I would like to thank Greg Jenkins of the Somerville Arts Council for making this happen.

Gloria Mindock is the founding editor of Cervena Barva Press and one of the USA editors for Levure Litteraire (France). She is the author of Whiteness of Bone, La Portile Raiului, translated into the Romanian by Flavia Cosma, Nothing Divine Here, and Blood Soaked Dresses. Widely published in the USA and abroad, her poetry has been translated and published into the Romanian, Serbian, Spanish, Estonian, and French. In 2014, Gloria was awarded the Ibbetson Street Press Lifetime Achievement Award and in May 2016, Gloria was the recipient of the Allen Ginsberg Award for community service by the Newton Writing and Publishing Center. Gloria recently was published in Akadeemia (Estonia), Poetry.com, Gargoyle, and her work is forthcoming in the We are You Project Anthology. Mindock runs the Cervena Barva Bookstore in the Somerville Arts Armory, as well as running, and co-running two reading series in the same facility.

The 40th Issue of Ibbetson Street magazine to be celebrated Jan 11, 2017

Ibbetson Street--a publication of the  Ibbetson Street Press was started in 1998 on Ibbetson Street in Somerville, Ma. by Doug Holder, Dianne Robitaille, and Richard Wilhelm. We have a great lineup of poets in Ibbetson 40, including Marge Piercy, Kathleen Spivack, Mary Buchinger Bodwell, Brendan Galvin, Ted Kooser and many others.
The potluck and reading for Ibbetson Street #40 will be held at the central branch of the Somerville Public Library on Highland Avenue, Somerville, next to the high school. It will be in the "auditorium" on Wednesday, January 11, 2017. Potluck is at 6:00 P.M. Reading begins at 7:00 P.M. We will be finished and out of the library at 8:45 P.M. There is free parking on-site. Also, you can get the #88 bus from Davis Square. There is a bus stop almost across the street from the library. Everyone who has a poem in Ibbetson Street #40 can sign up to read their poem. The room has seating for about fifty people.
In poetry and in friendship,
Doug Holder
Publisher
Harris Gardner
Poetry Editor
Ibbetson Street