Here is some prose poetry--from the Michael C. Keith universe.  Keith is a professor of Communications at Boston College. He is widely published in a number of genres.

Whitman brings them candy, books, and solace as their injuries from the uncivil war fester and resist healing. He loves their youth and listens to their battlefield accounts as intently as any minister or parent would. The great army of the sick relentlessly fills hospitals with its maimed and distressed as the bard of democracy holds vigils for the countless dying. Later at his makeshift desk in the embalming station he sets to paper the tears that have accumulated in his quill.

A body slumps in the Chevy convertible sedan. Its bloodied head hangs from the window. Cops are standing around waiting for the coroner to arrive. Already on the scene is Weegee, the ubiquitous press photographer. This is the second killing he’s shot since midnight. He hopes he’ll get in a couple more black-and-whites of low-life before the night is over. It’s been a slow one, he thinks.

Podcast: Interview with poet Ifeanyi Menkiti https://archive.org/details/Z0000058 Doug Holder interviews Ifeanyi Menkiti, the owner of the famed Grolier Poetry Book Shop in Harvard Square. The interview touches on Menkiti's interview with Malcolm X at a Harlem storefront shortly before X was assassinated in the Audubon Ballroom. Also included are his experiences with James Laughlin, the founder of the " New Directions Press," Ezra Pound, his history with the Grolier, his years teaching moral philosophy at Wellesley and a lot more. Menkiti appeared on Holder's Poet to Poet: Writer Show on Somerville Community Access Tv
Doug Holder at 2:51 AM No comments:
Share 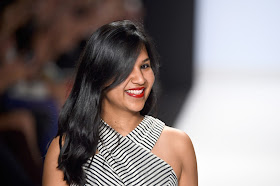 Somerville fashion designer Sandhya Garg does not lift a middle finger to offend the mandarins of the fashion world. But she uses it as part of her design concept of provocative, beautiful and engaging clothing.

I met Garg at my usual seat at the Bloc 11 Cafe in Union Square, Somerville. Garg was dressed simply, and looked more like a bookish graduate student than a fashion designer. Although Garg lives in Boston with her husband ( A doctor who is on a fellowship at a major hospital), she has a space at the Joy Street Studios in Somerville. Garg told me, “ I love the artistic vibe of the city.” She revealed that Joy Street has space for sixty artists, and it proves to be a stimulating environment for her.

Garg, who teaches at MASS ART in Boston and is a graduate of the London College of Fashion, told me that her attire has bold colors combined graphically to create bold prints. The clothing is influenced by world travel, regional folklore, superstition, etc... And Garg keeps in mind that she has hopes that the garments will provoke conversation, perhaps something more than, “ Hey girl...nice rags.”

Garg who hails from India is influenced by the artwork of the native Gond tribe, as evidenced by her graphics. Many of the prints she uses in her clothing are strong reflections of the work of these creative people.

Garg said her creations are wearable and avant-garde. She explained, “ My designs which are unique, bold and conversational are also wearable. They are not just their to make a statement or illustrate a concept, but to be worn and worn comfortably."

Garg worked at the Gucci factory in Italy, and honed her skills with hand embroidery craft, and vintage lace-making. She even created her own dress during her tenure there.

Garg tod me she has been influenced by the late, innovative fashion designer Alexander McQueen. She polished her skills at the McQueen design studio, as well as the Alice Temperley and Izmaylova studios.

McQueen was known to use “shock tactics” in his work. Garg follows a similar path with  her series called “Abusive Prints,” in which she uses the motif of a raised middle finger on some of her dresses to protest the indignities, sexism, and abuse many Indian women suffer in her country.

Her label, “Sandhya Garg” now has international standing thanks to a successful stint on the TV smash show “ Project Runway.” Her work was lauded by such fashion icons as Heidi Klein, Nina Garcia, and Zac Posen.

Garg told me that I could wear her clothing and perhaps start a conversation that is inspired by them. And indeed, perhaps I should. Although I might shy away from the raised middle finger motif—I have enough problems!

For more information go to  http://www.sandhygarg.com

For a related article go to:     http://www.stlabel.com/how-to-become-a-fashion-designer/
Doug Holder at 10:36 AM No comments:
Share


Susan Red is a writer, photographer, and artist currently living in the NYC area. While living in the Somerville area, she read at many open mics and self published her first chapbook containing poems and a short story.  Some of her writings and photographs can be found at www.instagram.com/caitandthemoon


My Criteria For A Lover

Call me darling
often and say it
sincerely
Touch my lips with
your fingertip until
you can not
Wait...
another moment
to kiss me
When I tremble
from nervousness,
wrap me in
my favorite blanket
and tell me all good
things about myself
When I tremble
from pleasure,
hold my body close,
get lost in the sound
of my breathing
Instead of fancy cars,
let's take a hippie van
to the mountains and
watch the stars
When one of us is sad,
let's simply say "I Care."
Let's watch each other's
favorite movies, listen
to our favorite songs
then discuss the meanings
in depth all night long
And when we're tired,
too tired to do anything,
let's simply be
with each other,
until we fall asleep
whispering Goodnight.