Carol is a film adaptation of a story by Patricia Highsmith (“The Talented Mr. Ripley”) about a love affair between two women in the 1950s.  One woman is a society wife, Carol Aird, played with her usual brilliance, by the inimitable Cate Blanchett.  The object of her affections is a young shop girl, Terez Belivet, played by Rooney Mara (The Girl with the Dragon Tattoo), who bears an uncanny resemblance to Audrey Hepburn, with her bangs, wide eyes full of wonder, and a touch of innocence.  These two women meet in a department store as the mink clad society lady is shopping for a Christmas gift for her daughter Rindy.  Why not consider a train set? the shop girl suggests, and the unusual nature of the gift (a boy’s toy) charms Carol who is enchanted by the girl’s youthful beauty, self-possession, and wide-eyed allure.  So much of this courtship, so much of the feeling between these two women, remains unspoken.  Eyes do the talking as do smiles and the scent of perfume and cigarettes, the glint of bracelets and the suggestion that life holds more possibilities than society allows us to consider.  This is the 1950s after all, and this is the love that dare not speak its name.  Carol leaves her leather gloves on the countertop and Terez makes sure they are returned with the train set.  Freud, so popular in the 50s, long ago explained that such forgetfulness can express an unconscious wish to return to the mise en scène; and so Carol now has her socially acceptable excuse to take Terez out for lunch; and the mutual attraction grows between the older woman, so well-heeled and so sure of herself, and the ingénue, who’s “just a girl who cain’t say no”, as the song (from Oklahoma!) says.  Terez accepts every overture Carol makes; and Carol invites her to her mansion for Christmas eve.  It’s a bold gambit but it pulls Terez away from her cloying boyfriend, the handsome Richard Semco, played with square-jawed manliness by Jack Lacey.  Boyfriends and husbands are portrayed a bit unfairly in this film as so many obstacles or distractions.  Carol’s husband, Harge (Kyle Chandler), is even more handsome and much more well-to-do than Richard; yet he’s a basket case because he is losing his wife. He tries every trick in the book from imploring sweetness to abject pleading to threats and thuggery to keep Carol in her gilded cage; but Carol will have none of it: “how many more tomato aspic lunches must I endure?”  she asks her gal pal Abbey (Sarah Paulson), a square-jawed beauty who was Carol’s former lover.  Harge knows about this illicit tryst and when he discovers Carol home with Terez he sees the writing on the wall.  If it were today we would say “she’s just not into you”; but it’s the 1950s, and things were, or seemed, so much more elegant then.  In fact, this film is one long homage to the 1950s – the fashions and styles, the form flattering couture and ladies’ gloves, the ubiquitous cigarettes, the men’s hats, the big Packard Carol drives around town.  Through Carol we glimpse the high life of the elite with their colored servants, chauffeurs, mansions, and money; and through Terez we glimpse bohemian New York of the 1950s, the jazz singers, the crowded parties in small apartments, the newspapermen, the photojournalists.  Terez is an amateur photographer with a keen eye for beauty and starts snapping away at Carol in unguarded moments.  So much of this film is about looking and watching like a camera; and we are lured into watching their slowly evolving love blossom as they hit the road together to get away from it all.  Then, when that fateful moment does finally arrive, it comes with such a sense of inevitableness that we find ourselves cheering that they finally gave themselves permission to fall into bed together.  The eroticism is emotionally convincing and intense; one cannot help but see this as anything but love.

Yet, society has other ideas about this sort of thing (considered a crime in that era), as does Harge, who has hired a private eye to follow his wife around and get the goods on her (he too is watching them as we are).  Harge is playing hard ball and threatens Carol with a breach of morals that can deprive her of shared custody of Rindy.  “I see”, she says, “if he can’t have me; I can’t have my daughter”.  Checkmate.  These two star-crossed lovers live in a man’s world and must play by men’s rules.  Although they are hemmed-in by a bullying and arrogant patriarchy they somehow find a way to be true to themselves and to each other.  “How can I be any good to her (Rindy) if I live my life against the grain?”  Carol asks at a lawyer’s conference in which she throws caution to the wind and embraces her truth, come what may.  It’s a powerful scene in which a woman stands up for herself and accepts the consequences a cruel and bigoted society will throw at her.

It is interesting to compare this move to La Vie d’Adèle, a French film released in America in 2013 under the title “Blue is the Warmest Color”.  This film is another story of lesbian lovers with an age differential in which beauty and innocent youth is matched with worldliness and savoir-faire.  But the French version does not end on the happy note obligatory for American cinema and deemed necessary by American audiences.  It is perhaps strange that in that vaunted land of love Adèle and Emma break up; but in America of the 1950s love triumphs.  C’est l’amour.  And we leave both movies thinking just that – this is love by whatever name you give it.
Doug Holder at 9:20 AM 1 comment:
Share

Laurette Folk: Through Compassion and Her Own Life Journey, She Finds Portals for Her Writing. 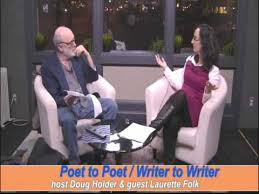 Laurette Folk: Through Compassion and Her Own Life Journey, She Finds Portals for Her Writing.

Laurette Folk is a poet and novelist who founded the “The Compassion Project: An Anthology,” an online collection of poetry and art that promotes compassionate thought and action through the arts. Through this project , her struggles with depression, the demands of being a wife, mother, teacher, and author, she has found portals for her creative work.

Folk received a semifinalist nomination and “Noted Writer” award from the Boston Fiction Festival and has been published in upstreet, The Boston Globe Magazine, Literary Mama, Narrative Northeast, Italian Americana, Talking Writing, among others. Ms. Folk is a graduate of the Vermont College MFA in Writing program and teaches at North Shore Community College.

I talked with her on my Somerville Community Access TV show Poet to Poet: Writer to Writer
http://poettopoetwritertowriter.blogspot.com

Doug Holder: You are the founder of the “Compassion Anthology.” Do you think the arts today give enough play to compassion?

Laurette Folk: I think it is there. But I don't think it is shown enough. Compassion is ajewel to be displayed. And you realize that when you are suffering. It brings people together. I think it is something we take too lightly in society.

DH: You suffered from depression. Did depression motivate you to look inward? In a way did it give you inspiration to write?

LF: In a way it did inspire me. It was a portal. My depression was clinical. There is a history of depression in my family. I had an intense experience with it. After college I chose a career that I wasn't suited for, engineering. I was bored. I was alone a lot. I lived in New York City—which can be very lonely. I was overstimulated, and I arrived at a dark place. I would write at night in my small studio in Forest Hills in Queens. I guess that was my portal into writing. I realized that there was an internal world that could be tapped into. I had yet to learn the craft of writing. So, yes, depression was a way in. Hey—when you are a writer you live an inward life. And when you are creative it ain't all daises and roses.

DH: You went to Vermont College. You described yourself as a misfit in a land of misfits. Explain.

LF: When I started my first residency I said to myself,” Wow, people like me really exist.” People really had an intense inner life and cared about writing about fictitious people. Kindred souls. I was very inspired—it was a rich experience. It was great to be put in a rich environment , with all these people who had rich inner lives. The teachers there led me to writing by wonderful writers. I don't know if I would have found them on my own. One writer that comes to mind that influenced me was Margaret Atwood.

DH: There is a lot of spirituality in your poems. What is your source of this?

LF: I am a fan of the poet Mary Oliver. And like her, I see spirituality in nature. When I go into the woods with my dog—that is when the poems come to to me.

DH: What is it about walking that often helps the writing process?

LF: I think it calms the mind. You are doing something with that restless energy. It gives you space.

DH: You worked closely with publisher Robin Stratton of Big Table Books on your novel“ A Portal of Vibrancy.” How was that experience?

LF: She is terrific. She is a generously kind person. I learned a lot. When you run a small press you have to wear a lot of hats. I learned a lot about—there was a whole process of publishing that I was unaware of. I worked closely with her.
Doug Holder at 12:12 AM No comments:
Share 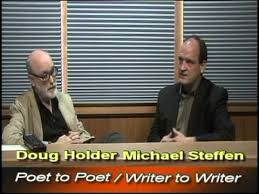 Michael Todd Steffen curates the Hastings Room Reading Series in Cambridge. His poetry and articles have appeared in The Boston Globe, Connecticut Review, Poem (HLA), ACM (Another Chicago Magazine), Ibbetson Street, Taos Journal and in the window of the Grolier Poetry Bookshop. His first book Partner, Orchard, Day Moon was published in April of 2014 by Cervena Barva Press edited by Gloria Mindock. He will be reading at the Cambridge Public Library on Wednesday January 27th with Mary Buchinger and Jennifer Tseng, at 6:30 pm in the library main lecture hall.

Less than ham and man’s endless
Cures and smokes to make the perishable
Last, elusively savory little smile
Of cheese, couched between the crust’s
Formal al dente and the meat
The stomach craves, like the nobles
In an overrun nation, you mean
With texture and stealth resistance
To the devouring, supper time,
Temperance, signed with singularity
That stood, and with a final silence,
That errant vowel on which won’t pounce
My English, which Italians pronounce.
Doug Holder at 4:47 AM No comments:
Share
‹
›
Home
View web version