Almost Too Much Barbara E. Murphy 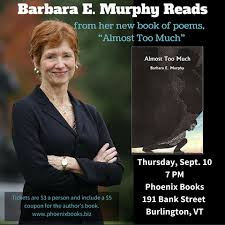 Should I be able to skim a poem?, I ask myself, as I look through Almost Too Much, a collection of poems by Barbara E. Murphy. Oh, why not? I can get an overall impression and then read and savor each poem more slowly. So I did. I found Murphy’s poems truthful and enjoyable—the right stuff of poetry—and yet not impactful, as the title of the collection suggests, nor especially transformative, as poetry aims to be. Something was right—a lot was right—but something was off. On re-reading, I did feel that she made powerful use of images, in short phrases or long stanzas, to evoke significant moments and strong feelings. Her language, too, often had the impact of simplicity and informal speech. Unfortunately, her language could become too conversational, diluting any potential impact.
Murphy’s poems do have a casual quality that invites you inside. While the usual poetry suspects, like metaphor or alliteration, are there, they do not press themselves on your attention. For instance, you might well conclude from the poem “Behind the House” that Murphy’s father’s row of tomatoes is nothing like the Garden of Eden, but she does not say that. The metaphor can easily be inferred. Or, the poem “Bedtime Story” features an appropriately somnolent sibilance, but the device does not leap out at you as if to exclaim, “Admire my artfulness!” The resulting accessibility—which permitted me to skim—is a welcome surprise in a literary genre that leaves many, unfortunately and unnecessarily, mystified.
Murphy even dares to use dialogue, not common in poetry of the present or past. A very few of Robert Frost’s poems are dialogues. T. S. Eliot wrote plays in verse, as did, of course, Shakespeare 400 years ago; their verse, however, is not in the form of dialogue. Murphy’s particularly striking use of a dialogue comes in a mother-son poem called “First Words, Old Story.” On first skim-through, the dialogue is touching in a way that a summary of a dialogue could not be. The son’s words indicate childishness; the mother’s words, corresponding playfulness. On re-read, the dialogue is bringing out contrasts and memories that take the reader on an odyssey, from a fairy tale world of “spell-breaking words that had to be guessed” to the mother’s experience of a “language/I had been born to, and lost.” (43)
Above all is imagery of photographic vividness. Indeed, quite a few poems involve photo timers or photos, such as the third poem of the collection called, straightforwardly, “Waiting for the Timer.” In that poem, the camera captures, among much else, teenage children that “dazzle/their hot skin and white teeth/ready for almost anything.” (5) These teenagers launch from the page like human jets. Yet another vivid poem featuring a photo timer is “Women’s Group: 30th Reunion.” The image of a boat of “less primary versions/of ourselves” surprises and then stays in the mind. (16) No question, such powerful imagery recurs.
Nonetheless, a fundamental flaw also recurs. Murphy tends to say too much, as if she is chatting with a friend or filling a gap in a conversation. You feel that, if she cut extra verbiage, like so much fat, a moment would emerge even more strongly, like muscle. For instance, in the poem “Heat,” the phrases “this limited view, her lousy sexual politics” seem redundant and cluttery. If she cut one of the phrases, the moment of complicity in the body’s truths would come forward. Other phrases in other poems come across as similarly redundant or somehow excessive, adding nothing new.

Then there appears a tightly formed poem with intense impact on the eye and the soul, such as “Losing Heart,” a short poem of four stanzas. Of the four stanzas, the last three have four lines, each devoted to a sound: o, a, s. Her imagery—especially, “the dry throat/ of nightmare”—packs a punch. The contrast is clear. You might call the poem a lean, mean fighting machine. But—even a fighting machine can have a flaw. It is unaccountable that loosed bricks in one direction become small round pebbles on the way back. In what world can this happen?
Still, there is more right here than not. Murphy places the reader in the poem exceptionally well, from her first poem onward. Certainly, we learn more than—to borrow Murphy’s phrase—prayers of petition.
Doug Holder at 12:27 PM No comments:
Share

Watching this film was a unedifying experience, though I think that was the director's purpose – not to glamorize, but to cast a cold light on crime, brutality, venality.

The actor who played John Connolly – Joel Edgerton – almost stole the show from Johnny Depp.  His performance was nothing short of amazing; he captured the swagger and the arrogance of the real John Connolly – as well as the look, the hair, the suits.  At the core of this sad story is the star-struck hero-worship Connolly has for Jim Bulger (a boyhood friend from the Old Harbor Village projects of South Boston).

Edgerton shows us not only Connolly’s admiration for the Irish-American mobster (tinged by a bit of tribal rivalry against the “damned dagos” running the mafia in the North End), but also his venality: “I can help you and you can help me”, he says in his pitch to Bulger when they first meet on a lonely pier overlooking Boston Harbor.  Later they drink a toast to “success”: two Southie boys, “project rats”, make it big.

They all had “The Look” of their real-life originals, even the strange but mesmerizing face of Jesse Plemons captured something of Keven Weeks, a professional pugilist and Bulger’s feared driver and bodyguard.  The unflattering banlon shirts, the state trooper sunglasses, the cowboy boots – these were all copied faithfully from their real-life originals like a Dutch master painting.  The accents too passed muster by my ear.

Benedict Cumberbatch played a sly, deft, and clever William “Billy” Bulger, just as decisive and just as cold and tough as his brother.  Again, few liberties were taken; it was a spare performance but all the more effective due to the economy of word, action, movement.

Depp's portrayal of Bulger was nothing short of a masterpiece of acting.  Icy, menacing, tightly coiled violence, yet undeniably charming, but in a deeply unsettling way.  It might prove to be the highpoint in his brilliant career so far.

They were all believable – even Kevin Bacon, who manages to get into all of these movies (he was in The Departed, and Mystic River).  He had the gray-on-gray look of the slouch-shouldered, overworked government bureaucrat just trying to get the job done but finding himself outfoxed by a Southie boy who played the game by his own rule book.  All the FBI scenes take place in a brutalist concrete maze of offices and hallways lit by the harsh glare of florescent lights, while the Winter Hill gang is embedded in smoky pubs and triple deckers, hemmed in by claustrophobic, narrow hallways.
Of course the dinner table scene in which John Morris gives up the family secret recipe was stolen from the famous Goodfellas original, in which Joe Pesci asks Ray Liotta “How am I funny?”  Even the killing of John Callahan in Florida steals from the scene in Goodfellas where the camera moves in slowly on the innocent-looking Cadillac in the early morning light only to reveal the dead body inside.

The whole movie was like a Dutch masterpiece – a brilliant copy of an Italian Renaissance original – but clearly in its own distinctive hand and subdued style.  The director, Scott Cooper, has been credited with making an "elegantly understated" crime drama.  I agree.  The documentary style was justified by the fact that this was not a fictionalization of the Winter Hill gang, as previous movies had been, but a dramatic depiction of real events that were known to have happened, down to the nap Bulger took after he strangled Deborah Hussey, the girlfriend of his confederate Steven “the Rifleman” Flemmi – who stands by helpless to watch his partner in crime ring the life out of her.  Then he’s told to bury her in the basement.  Everything in this movie was carefully lifted out of the public record and was served up without much embellishment.  It was as if the director had said: Just the facts will do – the facts will tell the story; you can't "improve" on them, so let them speak for themselves.

The film also managed to capture the US versus THEM (South Boston vs. "Cambridge") dynamic in the thinking of John Connolly and the brothers Bulger – the Southie boys.  That "townie" attitude, which was so in evidence in the busing fiasco of the 1970s, still managed to fuel the Bulger story from the 1970s into the 1990s.  It’s as if it were the price – a price – Boston had to pay for its long history of discrimination against, and ghettoization of, Irish Catholics (and no one paid that price more than the Irish-American communities in places like South Boston, Charlestown, and Somerville).

Finally what about the actress with the improbable yet beguiling name Juno Temple?  Wasn't she channeling Marisa Tomei from My Cousin Vinny?  And the other women – all brilliant, including the actress who played Ma Bulger – but all had minor roles in what was essentially a movie about men and their misdeeds.  Women’s roles range from mother (Erica McDermott) to wife (Julianne Nicholson as Connolly’s wife Marianne) to mistress (Dakota Johnson plays Lyndsey Cry, Bulger’s mistress and mother of his son) to whore (Juno Temple).  All of these performances were strong to excellent, as were those of all the male supporting and minor roles.

There were inevitable omissions – but these are not critical; the violence was graphic but not dwelled upon (as other directors have done in previous efforts to treat the same material).  The criticism of Jay Carney, James Bulger’s brilliant defense attorney, that the movie failed to tell the story of the widespread corruption of the FBI (there being many more people on the payroll than the two miscreants who had speaking parts in the movie – John Connolly and John Morris) is allayed somewhat by a brief reference to all the many people who had to be paid off to keep things running smoothly as thick wads of twenty-dollar bills are run through counting-machines and stuffed into envelopes.  This is the closest Scott Cooper gets to explaining why these terrible things happened.  Instead he opts merely to show us how they happened, and leaves the deeper question of the ultimate cause of such abominable evil an unsolved mystery.


**** William Falcetano holds a PhD in Philosophy from Boston University. He has taught at Curry College, Endicott College, Merrimack College and elsewhere. He is a  member of the literary group the " Bagel Bards" in Somerville, Masas
Doug Holder at 9:51 AM 1 comment:
Share 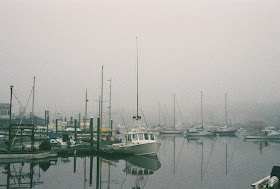