To the Dark Angels by Jared Smith

To the Dark Angels by Jared Smith (NYQ Books)

Jared Smith is a poet who has an intimate knowledge of the failure of language; yet he still writes, and writes powerfully. In his lead poem, “Shivering Between Beings,”   in his accomplished new collection: To the Dark Angels, he acknowledges this with poetic resignation and appreciation:  “What we build endures/from the fleet-footed animals/grained grasses/spaces between stars/endures beyond understanding/white within darkness/in the primeval without words.” This is a theme that reappears throughout the book. Smith, who has a great affinity for the working stiff, the “Hey, Joe what do you know?” everyday guy trying to make the daily nut, performs his work with words despite all its limitations. He punches in for the countless eight hour shifts, and puts in the hard work needed to convey beauty and truth.

Although many of the poems here are focused on nature (Smith now lives in the hills outside Denver), Smith was a resident of New York City when he first really cut his teeth in the literary world, and knows how to capture the ethereal beauty of the cityscape. In his poem “Back Briefly to the City” he conveys the allure, the endless possibility platter, and the dream New York offers.  Here you have a picture of the poet pining for a drink, and meditating on a vision of a cab as it disappears into the mystery of the night:That’s why I've come here now, it seems, but I’d like a drink first/ and to choose among the many sleek women in their furs with/all the secrets of taxi cabs run out into the city night on sequined feet.”

Smith rails against the buzz, the byte, the incessant demands of the cell phone, the quick fix, and the fragments of conversation that transpire over a wireless world. To this poet, to create art is a slow and contemplative process:

“... It takes raw youth
and time to work the patterns, shape clay
with colors carrying the patina of meaning
a time that lingers between the workings
of grandfather clocks and cell phones,
accumulating in the dust of empty rooms.
No instant messages, no quick network
comes from this where time stands, still,
just a slow communication that enfolds.”

Smith wants to impart a message to the reader, and he wants he or she to take notice—before  they send his or her next  text, or email, before they don their headphones-- before they shut themselves off to the world. 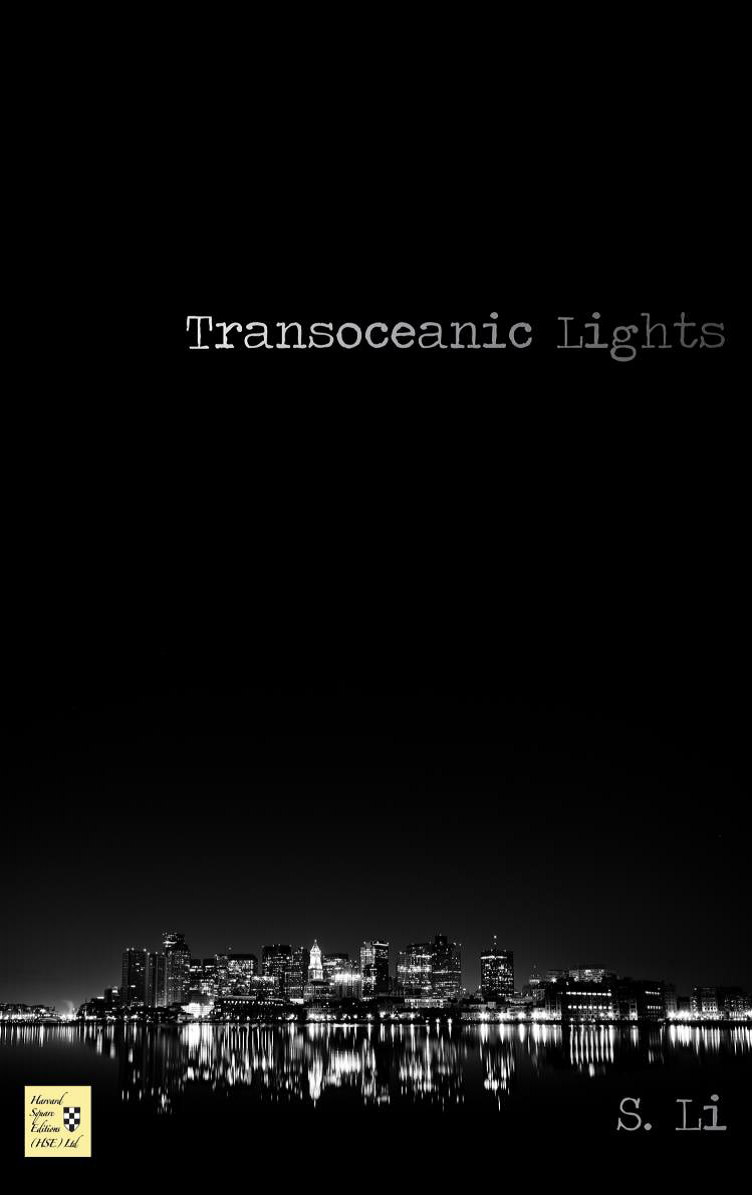 Transoceanic Lights is a first novel about a Chinese immigrant family's first four years in America, but labels do not adequately describe the high quality of writing, subtlety of construction, or fresh look at the subject.  The story is largely told by the oldest son, who was five at the time of arrival, and sometimes in his mother's voice.  The child is enormously intelligent, and his narration is seasoned by comments from years after the action, but these, rather than intruding, or lessening the story, broaden and deepen it.

The novel opens: "The clouds below drifted in the wind and swelled into rain-laden anvils the size of mountains before dispersing into wisps of cobweb."

Much of the tale is contained and foreshadowed in that opening sentence.  This is late twentieth century immigration.  The family is on a jetliner.  One world can be left for another in a matter of hours, and the transoceanic lights—the dreams, hopes, illusions that pull and uproot the family (The word will only be used once in the text and beautifully: in the last line)—are literally and figuratively, in the clouds.  The reality awaiting them will indeed be "rain-laden" and the crushing reality of immigrant labor will be an "anvil."

A sense of "dispersing" pervades the novel.  The essence of this story is change.  The first day of school will become third grade and fifth grade.  The difficult marriage between the narrator's parents will get worse.  Work will not get easier.  Work will always be work.  The horrid relatives—and there is doozy of an aunt and a hilarious awful cut-up cousin—remain horrid, but time is moving.  America does not stand still, no matter how difficult life is.  Everyone is in transition—on the move—toward the transoceanic lights.  This seamless novel beautifully shows the passage of time, mixing familiar worlds of childhood and the very trying world of immigrant adults.

The author, like his main character, was born in China and came to America at an early age.  He himself is "transoceanic."  Chinese?  American?  Chinese-American?  His child narrator is a fascinating mixture of all three—as newcomers to America have always been, as we amalgamate, cling, and change, into that shape-shifting phenomenon we happily call an American.  "Cobweb" strikes me as especially, Asian.  Think of the Cobweb Forest in Kurosawa's great Macbeth adaptation, Throne of Blood, where Washizu and Miki are lost in the violent, stormy Cobweb Forest, inhabited by demons and the Witch who makes the fatal prophecy.  One feels another sensibility in this novel.  It's exact and appropriate.

The word is used again: "The clarity of those days is long gone.  All the memories have vanished, replaced by figments, cobwebs, and ghosts."  This is more than a story of immigrant hardship; it is a story of and about memory.  Ma, the mother, remembers China and her loving father, who can not help her now, not with work, or mean treatment by her husband's family.  Ma remembers China but "all the strands that wove the fabric of those memories together belonged to a time never again to become present."

The writing is remarkable for its lack of self-pity.  Coming to America means work in an older brother's fast-food Chinese-American restaurant for Ba, the father; in restaurants for Ma, where she labors equally hard, but doesn't have the security of family.  Ba returns at night "to collapse from merciless exhaustion and wake up the next morning to resume the perpetual cycle."  That cycle includes nightly arguments over money, which he hides from Ma.  Ma says of working in America: "...it's all backwards, if I work hard someone thinks I'm a threat and tries to get me fired, if I slack off, out the door I go, and if I work just right, then it all depends on the whim of the boss."

It's not that the characters don't complain.  They do nothing but complain, and have reason to, but the novel doesn't complain.  The novel moves from one grade to the next for the narrator (A terrific evocation of childhood with its fears, bullies, accidents, friendships and lost friendships), the years of hard work for the parents, the birth of another child (A powerful scene.  The author is a doctor and the reader is the beneficiary), and finally Ma's return to China to visit her dying father, which is terrific.  The depiction of the Chinese hospital is amazing.  The reader may recall the phrase 'don’t get sick in another country.'  Transoceanic Lights does not ask for pity or resort to nostalgia.  This is life where no one has the option of quitting.  It's not the America I know.

The heart of the book is the ferocious love Ma has for her children.  She will work any job, call home any number of times a day when the narrator takes care of his sister, put up with a man she can not stand, not move back to China—for the sake of her children.  Education is everything.  The narrator can no more not be the best in school than Ba or Ma can quit their jobs.  Ma is literally sacrificing her life and happiness for her children.  Her son is her ticket to a better life and he's known that since he was five years old.

Transoceanic Lights is very well written.  The style is fluent.  It surprises, in the way a reader likes to be surprised, takes chances, and fits the story the way a seasoned novelist suits the word to the action.  Ma's angry phone calls to China become repetitive, but they are, of course, conversation, and conversation can be repetitive, especially if you hate someone, as Ma comes to hate Ba.  The shifting points of view move the story effectively.  Several times I was confused, but rereading solved the problem.  The use of detail wonderful.  Whether it be the nuanced smells of Asian food, a new city, the family's American apartment which has "an odor... occupying the corridor like a poltergeist," the filthy city streets of an American Chinatown (The city is never named), or massive litter by the Pearl River, the sense of place is marvelous.  This is a fine novel.

I doubt there will be many better published this year.  Let me be the first to welcome a serious new talent to the room.


**** Luke Salisbury is a professor of English at Bunker Hill Community College
Doug Holder at 8:08 AM 1 comment:
Share

I remember years ago meeting with January O'Neil, and the founder of the Mass. Poetry Festival, Mike Ansara, at the home of my friend Paul Stone in Cambridge. Paul Stone was the Creative Director of W.B. Mason, and I thought bringing someone experienced in advertising would be a good idea. I don't know how much (or if anything) was taken from that seminal meeting, but there is no doubt that the Mass. Poetry Festival is on the tip of everyone's tongue. Over the years many Somerville poets have been presenters at the festival, and this year is no exception. Offhand I can think of Pulitzer Prize-winning poet Lloyd Schwartz and Somerville Poet Laureate Nicole Terez Dutton. I caught up with O'Neil, who is a professor of English at Salem State University--one of the many hats that she wears, and wears well. The festival will take place in Salem, Mass. from April 30 to May 2.  For further details go to:  http://masspoetry.org


Can you give me a brief history of the Festival?

Co-founded by Michael Ansara, the first Massachusetts Poetry Festival ran in 2008 and took place again in 2009. Both were overwhelming successes and put Mass Poetry, the organization behind the festival, on the literary map.

How has it evolved from its start in Lowell?

In 2010, the festival took a year off and moved to Salem with Salem State University as a major sponsor. The Peabody Essex Museum and City of Salem have been valued supporters of the festival as well. In 2011, I came on board as a volunteer and eventually became its executive director in 2013. Laurin Macios came on board as program director, which gave Mass Poetry the next level of structure. Laurin has been the driving force behind some of our most recognizable programs: Student Day of Poetry, Poetry on the T, and the U35 Poetry Series—to name a few.

Tell me about some of the headliners this year.

Do you feel the festival is inclusive of the many different voices, camps, schools of poetry that we have out there?

That is our goal. We have made a conscious effort to reach out to all parts of the state and into New England to bring new voices. Our programming committee received more than 170 proposals, so it was a difficult task narrowing the selection down to about 60. But I’m quite happy with the diversity and range of poets and poetic voices.

Of all the memorable moments you must of had working for the festival--which stands out?

There are too many to name. Working with the festival volunteers and seeing so many familiar faces year after year makes it all worthwhile.

How can one get involved?

Visit masspoetry.org and find out more about the festival, volunteering, and other ways to get involved.


***** For information about the Mass. Poetry Festival go to http://www.masspoetry.org