Eating Grief at 3AM by Doug Holder: A new release by Muddy River Books

I am thrilled to have this chapbook coming out from the new small press Muddy River Books. The first chapbook they put out was Pleasure Trout by Gloria Mindock--the founder of the Cervena Barva Press. 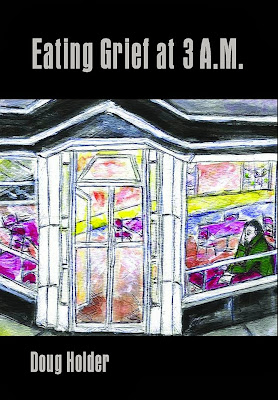 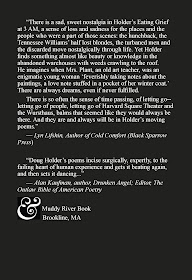 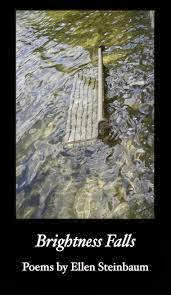 Ellen Steinbaum, known in the Boston area as the former literary columnist for the Boston Globe, is now the author of her third collection of poetry, Brightness Falls.  Gail Mazur has written that this collection “maps the brave, risky journey from bereavement to the "stunned contentment of new love.”

“Last night his late wife/came to him in a dream/then slid away, kept/slipping out of reach/down foreign streets/while I slept beside him…” writes Steinbaum, whose own late husband “calls to me from time/to time, wants help/finding his cufflinks, keys.”

A big part of relationships is where you go together. Boston area readers would be intrigued by the poem “Shopping at Bread and Circus after/Hearing a Poet Read Poems about/her Trip to the Low Impact/Wilderness.” Steinbaum pens “we glide down aisles/smile beatific thoughts pure/our Saabs and Volvos parked outside/bumper-stickered ‘Free Tibet’/…shelf life is short here/infant eggplants artichokes zucchini/reaching their destinies fast/baby spinach ripped/from its mother earth…”

She takes us around New England, where in “Thursday, February, New England” “It has snowed more than seems possible…” and to Boston from Cambridge in the cover poem, “Brightness Falls” in which “the Red Line train/rises out of the tunnel just past/Kendall Square Station,/crosses the Longfellow Bridge,/sunlight glinting off the/Charles and the hammered gold/State House dome….”

The metaphorical atmosphere in “A Hundred Forevers” rounds out the end of the book, where the author is buying the desire to have love last “forever” when she purchases one hundred Forever stamps at the U.S. Post Office: “Can I exchange this and for/just two dollars more have/a hundred forevers./Forever—not, we know, a word/to be believed: a note held on/past breath, the Dennis beach/beyond the oyster beds where/sand blurs into fog, or the/unlikeliness of this—our stunned contentment that/has not, as yet, eroded into boredom, irritation, those sodden,/all-too-human stats that could/unspangle our small future. But/the enormity turns doubt aside: in this quantity,/no option but belief.”

Ellen Steinbaum, who lives in Cambridge, Massachusetts, grew up in Wilmington, Delaware. Besides her past post at the Boston Globe newspaper in Boston, Steinbaum writes a blog called Reading and Writing and the Occasional Recipe—at ellensteinbaum.com.  Her two previous collections are Afterwards and Container Gardening.  She also wrote a one-person play, CenterPiece.
Doug Holder at 7:38 AM No comments:
Share
‹
›
Home
View web version