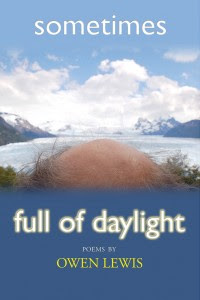 Owen Lewis in his first book, Sometimes Full of Daylight, hammers his poems into place as life’s turbulence swirls about him. His clear-eyed, but always passionate, words glint with strange grief-ridden insight from that other-worldly and profound calmness he finds within the eye of his own personal storm. He rails against the gods of this imperfect world and the irrationality of their institutions. In short, like many of us, he tries to hold his family and loved ones together, anchoring them, keeping them from spinning away into the sparking sun and certain annihilation.

In the collection’s opening poem entitled The Walls Lewis hits a home run. With soaring language the poet personifies the exterior and interior barriers to the bone-crushing emotional tempests that assault us all. In a way the piece laments an innocence lost. Here’s a selection,

The wind is always at them, whistling
without melody, kind of eggs them on
into a sort of humming vibration.
And in storms—what howling!
I’ve noticed how it gets them agitated,
blows at them till their middle strut.
I like those storms when the walls
puff out. They get indignant.
Each time they never quite go back
aligned, like making a room
becomes odd for them…

The poem The Sea I Ride reminds one of the Wizard of Oz. Instead of Dorothy’s home flying through the tornado, the poet finds himself asea on splitting planks watching his home and family storm-tossed. The tone is almost of a frolic and thus very, very unsettling. The poem ends this way,

the splitting jamb,
my house goes by,

a hand of thanks
my surf-sped bride

must sing her tune
her lover’s swoon,

The sea I ride.
My house goes by.

In the poem Philosophy the poet attributes his own ability to find the calm at the center of things to his father’s influence. His own strained relationship with his father creates some interesting irony. The poem begins with these lines,

He schooled me to say so what—
to disappointment and hurt.

To him it was philosophy, armor strapped
invisibly, a gift to a young son

from the soldier whose bad eyes
kept him from World War II.

Long car rides, errands for hardware,
the blue smoke of his cigarette stinging my eyes,

the dialed radio playing Benny Goodman,
each turn a rift of static, over-riding a child-

The poem Psalm comes across as a gut-wrenching prayer of helplessness. An estranged wife and her lover fill the poet’s persona with the concrete of despair. He is beyond reacting. Beyond hate. Only after-thoughts have meaning. And these after-thoughts become poetry. The poet says,

why are they pouring concrete into my mouth
and eyes? it hardens as you read these words.

wife helped lover mix the sand and lime.
I have become a body plank,

and they can do anything they want. what
you hear are after-thoughts that don’t stop.

Revisiting his childhood Lewis’ persona seems to seek strength in defiance. As he walks through holy Rood cemetery he breaks off a flower and swipes it. This petty action brings him back in time and seems almost a family tribute. He remembers a secret habit of absconding with such flowers. The poet explains,

… Portrait medallions
fixed to their tombs watched us,
even nodded to say—yes go ahead, our families
won’t be back this week, so bring them home to yours.

And until the month of the first blanket
frost, prime mums and dahlias, late hydrangeas
found their way to the Lenox vase
on the living room piano, a gathering
of defiance.

I’m here but you can’t see me.
Haven’t seen me for
twenty years.
Or ever. Blink
Go to sleep.
Stay asleep.

The poem continues by defining Odysseus’ longing for home as really a longing for one room of hand selected memories. And, oh by the way, his divorce decree is now three years old. Nice touch.

Life within the eye of the storm can, on a bad day, turn to claustrophobia. Lewis’ poem Van Gogh’s Goodbye is a case in point. The poet describes the painter’s last painting in breathless measures. He concludes with sharp, short phrasing,

Smoke and clouds are moving shapes.
In silhouette minutes merge
and shadows meet,

Close in on the last of light
and suffocation’s blue.

His white eyes whirl in frenzy.

There are a number of very good poems in this impressive collection but the poem Because I Do Not Love You has to be Lewis master work. Its musicality and its wisdom stay with you. In spite of its title it is, of course, a love poem—a calm love poem. Here’s a bit of it,

I can look away
and not make you the sun

As love can make a sun of the moon
and stars of dark eyes—
how lost and confusing the cosmic map
when constellations
must be traced with held hands.

I do not make you the sun
and can see you

Lewis’ poems do not have the feel of a first book. They exude maturity and craftsmanship and leave the reader with high expectations of the poet’s next collection.