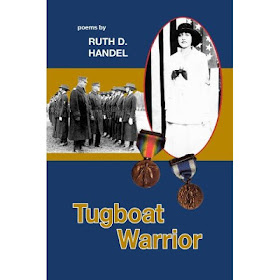 Ruth D. Handel, in her book of poems Tugboat Warrior, reframes her mother’s historic life in a series of personal, sometimes achingly personal, poetic fragments, each one set at a slightly different angle. The collection expresses a line of narration that Ernest Hemingway would call, "one true sentence." Its multiple facets of heartfelt observation, positive and also negative, deliver this truthful sense of a heroic, flawed, and driven woman.

One of 12,000 female naval and marine enlistees during the First World War that freed up more men for shipboard duty, Handel’s mother, Florence Gluck, was both a feminist pioneer and an unabashed patriot. Although the Navy desperately needed stenographers, typists, translators and other office help to deal with the huge amount of war- generated paperwork, they had a problem. Every enlisted yeoman had to be assigned to a ship and women were not allowed on ships. In grand bureaucratic fashion the Navy solved their problem by assigning all 12,000 women to a sunken tugboat from the Civil War era. Thus the title of the book!

The first poem in the collection entitled Fragments serves as both a mini- introduction and microcosm of what comes after. The poet details a list that sums up an image of her mother,

inscribed "To My Hula Girl,"

she drove to the beach,

on the cover of the phone

book by her bed,

You can’t help but feel the sadness and the intensity in the poem’s final line. The very next poem, Bricolage 1, expands on this sadness but shows the trade- off. The poet notes the sources of her creativity,

using whatever comes to mind

from anger, from images of a shadow mother

who lacked tenderness, but not pride,

who once rose alone for a patriotic anthem

and by example drew the assembly up,

her nine year-old daughter unwilling at her side.

In the poem Mother as Little Girl in White Hat, looking at a portrait of her mother, Handel speaks out her admiration,

What do you hope for?

Are you rehearsing the self-willed woman

The portrait is almost one hundred years old.

There is no doubt about Gluck’s pride in serving her country. The full length photo in front of an American flag on the cover tells all. Handel describes that photo in the poem Brooklyn Navy Yard this way,

She poses proud, white skirt to her ankles,

white jacket one stripe on the sleeve,

she’ll change to blues and a flowing cape.

Handel adds that her mother is issued a Bluejackets Manual that "every man on board ship must know." The poem ends with not a little irony,

and given medals to commemorate

the Great War to End All wars.

Handel admits to jealousy as a child of seven, a not uncommon jealousy to be sure. But her emotions were frozen in time by awful circumstances, and never blunted by accommodation or reconciliation. The poet in a poem called Wind-lashed Rain complains,

Arm around his shoulder. Sheltering.

Here is how Handel concludes the poem,

I am seven. My brother four.

Three years later, she would be lost to us both.

Emotional separation from a parent can maim a child deeply. Handel recalls such a wound in her poem Crabmeat with this intense image,

I find my mother in the dining room

On a green glass plate.

She looks up but doesn’t offer a taste.

Her fork flicks aside a tiny piece of shell.

Some facts of Gluck’s story are repeated by Handel in different poems, but they each come from a different direction with originality and even surprise. The poem Bricolage II begins this way,

No one else in the hall was as quick to rise.

I whined and struggled as she yanked me up

and for a moment we were the only ones standing,

me in the angers of 9 year-old embarrassment,

she at attention. My arm felt her sting for years.

When I marched for civil rights, walked

protested war Florence was not in my line

of sight, yet in memory she was always standing

In spite of the friction between them, Florence Gluck became the poet’s role model for feminist rights and another, equally important, kind of patriotic service—protest. Another bit of irony perhaps!

These generational poems do justice to an imperfect but admirable woman and her equally remarkable and talented daughter. One true sentence, followed by another and another— isn’t that what poetry should be?
Doug Holder at 1:00 AM No comments:
Share 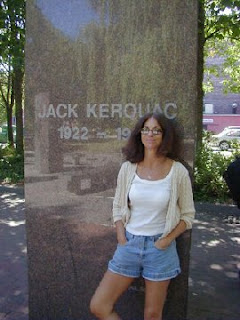 Robin Stratton has been a writing coach in the Boston area for almost 20 years. She is the author of The Revision Process, A Guide for Those Months or Years Between Your First Draft and Your Last, and two chapbooks, Dealing with Men and Interference from an Unwitting Species. A two-time Pushcart Prize nominee, she's been published in Word Riot, 63 Channels, Antithesis Common, Poor Richards Almanac(k), Blink-Ink, Pig in a Poke, Chick Flicks, Up the Staircase, Shoots and Vines and many others. Her novel, On Air, (Blue Mustang Press, 2011) was a National  Indie Excellence Book Award finalist. A second novel, Of Zen and Men, is now available from Big Table Publishing Company. She’d love to have you visit her at robinstratton.com  I had the pleasure to interview her on my Somerville Community Access TV Show:  Poet to Poet: Writer to Writer.

Doug Holder:  How did you establish yourself as a writing coach?

Robin Stratton: Well, that is a good question because it is hard to break into being a writing coach without a lot of writing credentials. It just sort of happened.. I had a number of people who approached me to edit their manuscripts when they learned I was a writer. They knew I had written novels--and they liked them--so it naturally followed. This was in the late 80s and there was not as many people doing coaching as there are today.

DH:  Did you have writing coaches?

RS:  For about three months. And this was before the Internet--so this is how it worked. You send the book, and it would take a week or so for the coach to get it. Then they would read it. And then they would write up their responses, and that would take another week--and then they mailed it back. But I did learn a lot about how to give feedback from this experience.

DH:  How would you define the role of a writing coach?

RS: I think a coach is someone who could tell you what the weakness is in your writing. He or she can advise you how to make it more commercial. They can advise you on the rules to adhere to sell books. I think tat is what people need from a coach.

DH:  I get the sense from you that you try to instill people with a sense of confidence?

RS: Yes. You have to try to build people up. Anyone who has finished a novel--well that's huge--so you want to cultivate that.  It takes a lot to write a book.

DH: Has there ever been a first draft that you can totally go with?

RS: Oh...No. Some poets can be pretty good the first time around--not so much for novelists.

DH: How many drafts do you have for a typical novel of yours/

RS:  15 drafts. I like to have a writing group--and that helps me. I always tell novelist that they should be in a group if they possibly can. Not only is it good to get feedback--but when you give feedback it illuminates weaknesses in your own writing.

DH: You write poetry as well as fiction.

DH: A lot of your novels are about relationships between men and women. Your new novel Of Zen and Men is evidence of this.

RS: I think that is what's most important to me. A reader can see their own relationships through the relationships in the book, I hope. All my characters have to go through a grand transformation. They start out likable but flawed and then something happens, and they wind up more effective.  Everybody can relate to this.

DH: Tell us about the book you published from your own Big Table Press   The Revision Process ?

RS: I published that when I first started Big Table. It was a test book. It's not about the writing but the revision. That is where a lot of writers get stalled--the revision. This is a way to look at their manuscripts with a new set of eyes. To specifically look at things. A writer knows when something doesn't work--but sometimes they don't know why. I thought it was a useful guide. That came out in 2006. I then published chapbooks, and lately perfect bound editions.

DH: If you had a son and he wanted to be a writer would you encourage him?

RS: If I didn't have the contacts I have I might steer him to learn something that could supplement his income. I would say to a young writer :"Make sure you are in a writers group, have a lot of computer skills, make sure you use social networks to promote yourself, and make sure you have a website." 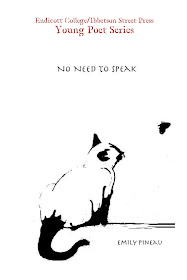 Since the Ibbetson Street Press and Endicott College formed an affiliation a few years ago, we have tried to reach out to the creative writing student body as well as the faculty. During this time we have published student interviews with such accomplished poets and writers as Marge Piercy, Maxine Kumin, Diana Der-Hovanessian, and others in our literary magazine Ibbetson Street. Students, as well as faculty have seen their own poems published in my column in The Somerville News. Students have written book reviews on our popular literary blog Boston Area Small Press and Poetry Scene, and in the bible of the small press itself: The Small Press Review.


Ibbetson Street has also started a small press collection with the help of the Halle Library staff at Endicott that houses alternative, small press poetry and fiction books from around the country in the tradition of the great rare book and poetry collections at University of Buffalo, Brown University, and the University of Wisconsin/Madison. We feel this growing collection will be an invaluable resource for future literature and creative writing students at the college and for the literary community in general.

We have arranged readings for students at such venues as Medicine Wheel Productions in South Boston and the Jewish Community Centers of Greater Boston, as well as helping them get literary internships in the Boston area.

The Endicott College/Ibbetson Street Visiting Author Series has brought such acclaimed authors as DeWitt Henry, Sam Cornish, Fred Marchant, Richard Hoffman, Luke Salisbury, Bert Stern, Miriam Levine, Tom Daly, Michael Mack, Vivian Shipley, and many others to campus; so the students can hear first class writing and get insight into their own work from talking with these authors.

Dan Sklar, a professor of Creative Writing at Endicott College and I discussed other ways that we could reach out to the Endicott community. We decided on a Young Poet Series that would publish the work of talented undergraduates once an academic year.

Our first poet is Emily Pineau. Pineau is a student of Dan Sklar's and has reviewed books, interviewed poets, and has had work published in Ibbetson Street, Endicott Review, and other magazines. In fact Pineau was nominated for a Pushcart Prize (By Zvi A. Sesling, editor of the poetry journal  Muddy River Review)--a prize given for excellent writing within the vibrant literary subculture of the small presses and literary magazines.

Emily has an accessible, honest and evocative style that shows great promise. We hope this little poetry book No Need to Speak will inspire her to keep writing and publishing, and inspire other young writers in the Endicott community.