Wild as in Familiar By Ellaraine Lockie 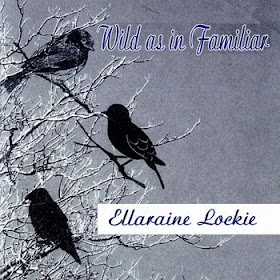 Wild as in Familiar

Wild as in Familiar treats nature’s assaults on man and man’s interventions into nature’s processes with a critical eye and an aggressive imagination. To fully appreciate these poems go immediately to page twenty-two and read Ellaraine Lockie’s tone -setting poem, Rebellion. The debilitating rupture of a disc causes the poet’s doctor to order,

Stay away from amusement park rides

The cowgirl-poet spurns this sensible advice and mounts up, riding a middle-aged horse, which had been headed to a dog food factory. She identifies closely with this horse because of their mutual age and vulnerability. She offers that “we were related long before I adopted her.” She describes them in tandem moving

Toward the flames of sunset in front of us

Our manes flying free in the prairie breeze.

In Earthworms in My Hand, the poet’s persona again intervenes in nature, rescuing earthworms from a Katrina-like deluge. She

Rescues in the scoop of one hand

The hollow of the other

Back aching and deadline waiting

These missions claim the entire morning.

She, however, is motivated to accomplish her good deeds by sad memories and intense longings:

They don’t see my father’s faraway gaze into grief

Or my want of a man like these elfin lovers

Who slither on their natural lubricants

Over palms and between fingers.

Another earthworm poem entitled, Walk with Earthworms, makes the case that nature is quite unsympathetic to suffering. In fact it is often malicious,

I’m as fragile this morning

As their flushed-vein colored flesh

Of umbrella or outerwear

Bending into stings of sorrow

Zeus is having none of it

And claps his thunderous hands…

SAD is actually a pretty funny poem or rather the idea of it is pretty funny. It details a counterattack against the now recognized disease of seasonal affective disorder. An orange robe, a rhinestone brooch, hundreds of burning candles, a snow- white wall, Christmas lights, a blazing fire, and lemons sucked through a peppermint stick all do their part in combatting the dark mask of melancholy. The poet uses martial imagery and strikes a defiant pose,

You attack after two torrential weeks

This time you won’t find me

Wallowing in any river of resignation

This time my skin is steel.

In the poem, Evolution, the poet confronts the coldness of nature and accepts the callous actions of God’s creatures,

The need of a hawk to systematically pull feathers

From a sparrow before eating it alive

Or a kea to attach itself to the back

Of a sheep and hammer beak to kidneys

A deviant rabbit that eats her own young

The pyromaniac and pedophile…

I surrender to dichotomy

To the world and the obscure wisdom of its creator…

Two poems, which seem to be at odds with one another, are Drawing Breath and Fallout. In Drawing Breath medical science intervenes against nature by providing a contraption to fight sleep apnea. The poet points out the unnaturalness of this by having her persona read a Stephan King novel and by contemplating the three day life cycle of a crane fly. Fallout deals with a much more serious topic: abortion and the multi-generational scars it leaves. The metaphor the poet uses is the bud on a rose bush that confronts her. Unquestionably, anger rises here,

..nor the bite of thorns

Can protect that bud

A small sacrifice to the tiny worm

Still chewing on a leaf

And to a grandchild stolen

Not for everyone, but intense, honest, and well written.

Staying with this difficult theme, the poem Wings Clipped asks the question, when is it proper to play God? The poet’s persona discusses the fate of a damaged Monarch butterfly with her grandson (yes she does have a grandchild),

Do we hammer him between the newspapers

Now it gets tricky

The last two poems in the book deal with death, salvation, and homespun religion. They are lovely and uplifting. A Wretch like Me takes you to

The dust to dust kind

With no metal, plastic or satin lining

Displayed under a Madonna tree that has lived

Longer than the woman in the coffin..

The Amazing Grace hymn played by a bagpipe is the backdrop. Lilac balm becomes the aroma of saving grace.

Saying Good-bye, the last poem in the book, identifies a light, which emblazons a madrona tree as the light of salvation. The poet notes that this light is from the natural world, not the interior of a church,

Not in sixty years of Sundays

A searchlight for lost souls

For the downtrodden, the sick, the guilty, the sad…

It is this light, which gives the coldness of the natural world a warm context. Lockie’s poems do likewise. She takes the terrible beauty of nature and touches it up, line by hurtful line, with human love. Amen.
Doug Holder at 2:07 PM No comments:
Share

I love the Paramount. It feels splendid and yet inviting, comfortably kitschy in places and slightly intimidating in others. The tall splashy paintings of lovers in by-gone eras, the dramatic and grand stairwell and entrance, the spectrum of innovative cultural offerings always allows me to feel like I am completely held in the transformative arms of good art.
So even if I don’t like the performance I am seeing, it doesn’t matter. I am already engaged just by going.


69”S. ( The Shackleton Project) was described to me as watching poetry, or hearing a symphony, but I simply could not find myself in the piece. There is no dialogue, lots of edgey music and stunning visuals projected on the stage. And some technically intriguing performance work. It’s a multimedia and abstract exploration of the thrilling, dangerous and heroic journey of the Antarctic of 1914. Program notes and lots of back story is helpful, but for me, this performance was more enjoyable viewing it on its own devices.


There are nine Tableaux with no clear breaks between them. The Tableaux are written down, but you can’t read your program to see because the theatre is dark, so….


The first was Elemental Dreams: “After an ice age, man returns to earth.” Several dancers in bright red leotards perform against a white stage. It looked like they were having fun, and as usual, the littlest one gets thrown way up in the air a lot. (In my next life I want to come back as the smallest member of a very cool dance troupe.)


In the next several Tableaux, gigantic puppeteers maneuver marionettes, representing the explorers, through abstract and well thought out scenes. I just didn’t understand the thinking behind it. I spent the first 20 minutes of the performance (one third of the evening) wondering if the marionettes were real people or puppets. They seemed to be muttering a lot and they, the marionettes, moved beautifully. The puppeteers wore long white robes and winged head gear, and they looked like angels or lesser gods. The relationship between the marionettes and their masters was tender, careful. I loved watching that. Phantom Limb, a New York -City-based husband and wife team, created the puppets and use many other traditional theatre forms to investigate current perspectives on contemporary issues.


A black skeleton arrived and I have to say, it was a great idea, but just not executed at the same level as the puppets. The skeleton puppet was the same size as the human puppeteer, and you could not make out the skull well. It’s only that the faces of the other puppets, the Shackleton explorers, were so exacting and so mysterious that the black skull was more of a distraction. And the seal puppet seemed like bad comic relief.
The stage was an everchanging canvas upon which arctic weather was projected. Abstract images at times, and then real ghost ships and glaciers, and at one point a lovely beach which flooded the theatre. Deftly, a terrifying crack in the ice floe was projected on to the stage. This “ installation in motion” was fascinating to watch. There was a geological image that was projected several times, in several geological phases, but it was not clear to me. I guess it was a glacier melting, and I guess I am supposed to recognize the shape, but somehow the message got lost in the abstractive art. The video design by Shaun Irons and Lauren Petty was engaging and worked seamlessly with Jessica Grindstaff’s set design.


I guess the skeleton and the lesser gods and the long sheets of ice and shapes changing are meant to have a message. I sat next to a professor of theatre at a pretty good university and asked what she thought- she said “maybe the leotards are red because they didn’t want to do “Blue Man Group”?


The next day in my writing class we discussed the power of dialogue and I realize that the visuals were meant to speak, the silence was meant to be the voice and the little red dancers were the grammar. Then again, maybe not. It’s abstract and we are meant to piece it together.


The music was performed in four locations throughout the theatre, and was also recorded. Skeleton Key creates ice cracking as part of their score, eerie winds and glorious instrumentals, give voice to the elements, dialogue with the shifting images on the stage.


After the show, in the foyer, there were two women excitedly discussing the performance. I asked if I could join them and they invited me to sit. Retired librarians and teachers, they told me the piece was like walking into a poem, or into a symphony. They loved the piece. I loved talking to them—the foyer feels like a living room where good friends can meet.
I walked down the elegant stairwell and felt like I was leaving a beloved shore. Sure, I read all the notes and know there is a statement here about nature and brave humans and larger gods and masters. But mostly what I loved was the dedicated thoughtfulness, created by ArtsEmerson, which brings us together, lets us chat to strangers about topics as large as the very gods, all while being held fully in the poem of the Paramount Theatre.
Doug Holder at 7:32 PM No comments:
Share

A Moustache-a-Thon works much in the same way as any ordinary walkathon, marathon or telethon fundraiser. Instead of walking, running or answering phones on television, however, Moustache-a-Thon participants, men and women alike, shoulder the mighty job of growing or crafting their own unique moustaches in support of 826 Boston's free youth writing programs, which will reach over 2,000 Boston Public School students this year. Remember- a moustache is more than a crumb catcher. It's a beacon of your love for 826 Boston.

Join us at an upcoming weigh-in! Size up the competition and get some rivalries bristling.