Review by Zvi A. Sesling

When I first heard of the idea behind the play: Anne Frank survived the Holocaust and was alive in New York circa 1962, I had grave doubts about one of the iconic symbols of the six million who died at the hands of the Nazis being misused or misrepresented by a modern day writer, not Jewish, for the sake of a play. After attending this reading, however, I can attest that playwright/poet Lawrence Kessenich has achieved a marvelous play that brings life – on stage – a double faceted view of what might happened, or not.

The Anne Frank as Kessenich conceives her is also Ann Franklin resident of a mental institution in New York. She claims to be Anna Frank, but her psychiatrist tells her she is Anna Franklin. She does her best to try and convince him, she goes back and forth between her two personae and the audience wonders is she, or isn’t she? Even Anna Frank’s father is torn when he visit’s her at the hospital and she asks, “Why don’t you hug me?” But of course he cannot because he does not believe it can really be her.

The play is interspersed with characters at the hospital who include a patients who believes she is Marie Antoinette, a man who says he is Franklin Delano Roosevelt,
and the ghost of Anne’s mother, who died in a concentration camp.

In the end, Anne Frank’s father comes to accept her, even though the audience probably does not. Is his acceptance mere hope, a desire to have his daughter back or an illusion?

The answers are not always clear, though in one of her final monologues Anne/Ann says she must remain dead because, “It is the least I can do for my people.” She is afraid the Holocaust will be considered a fraud if she is alive. But perhaps it could also be said then that she is doing it for the world, whether real or not.

It is a play I look forward to seeing in full production where it will be worthy of a wide audience.
Doug Holder at 1:36 AM 1 comment:
Share 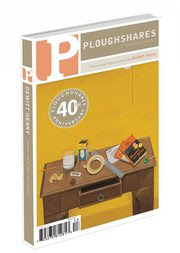 
DeWitt Henry, founder and longtime editor of Ploughshares, has made the adventure of contemporary writing synonymous with his name. 1970’s criticism by conservative critics claimed contemporary literary magazines like Ploughshares served only to promote an institutionalized outlet for mediocrity rather than the Modernist innovation of the magazines of the 1920’s. Dewitt Henry responded: “the question is less one of providing sanctuary for Avant Garde than it is of providing access and recognition for a whole new generation of writers remarkable for their diversity of directions.” That diversity posed deep issues about standards of taste. An audience had to be created that would be able to appreciate not only particular new writers but also the plenitude of new writing. The way the founders established to do this was that each issue would have different guest editor who in choosing the works appearing in his or her issue would indeed create that audience for his or her own work. The assumption is that by choosing a variety of writings that each one likes, honors, learns from or teaches, readers join the adventure of apprehending the guest’s work understanding more deeply his/her concerns and creativity, the work itself.


The 40th anniversary issue reflects this model exquisitely. Henry has made this issue a working summary of the last forty years of Ploughshares. Twenty-five former guest editors--of which Alice Hoffman, Sue Miller, Ellen Bryant Voigt, Lloyd Schwartz, James A. McPherson are only a few--nominated and introduced an emerging writer, gave an account of a turning point in their careers, or contributed a new work. Largely a collection of short stories, parts of novels, poems, memoir, only one of the contributors, Richard Tillinghast, in his essay “Turning Points” provides such an account. It is a quiet piece, episodic, it does not claim a great deal for itself, but I find it a lens for many of the other voices and yearnings that show up in this edition. Tillinghast’s turning point relies on maps, a summer in Turkey, a late permanent residence in Ireland, learning new languages, living in new old environments, all of which give him the chance to create anew, to return, as it were, to the starting point to see who he is now, to start over as often as possible, to produce vigorously perceived art.


It is not just individuals that start over, generations do and culture, as well.The conjunction of introductions by established writers and the new writers they introduce suggests one generation scooping up the following to toss it in the air like a toddler, laughing. In a brief, sort of tossed up in the air introduction, James A. McPherson offers us Nicholas Butler’s story “Apples,” to which Dewitt Henry gives pride of place. An an explicit account of what it’s like to have to start over, it’s the first story in the magazine. The protagonist has lost his job as an appliance salesman and suffers through the shame, the listlessness, the sense of distance from his wife. We observe him working his way through his misery, encountering disappointments along the way. Jobs his brothers hand him run out. Yet there are rituals of engagement he maintains, baseball games, etc. which lead to a job picking apples alone in an orchard and finally an encounter with man whose sense of loss mirrors his own. Except that man’s misery is not about losing a job, rather the wife he loved all his life. It is at this point that we realize that the wife has been the underlying energy in the story and provides the occasion for an unanticipated recovery. It is, incidentally, a wonderful read. Further by placing this story as the first story in the magazine, the editor is using his considerable editorial genius to point to our contemporary losses, really, if you think about it the most pressing issue as we all encounter the loss of jobs, our children’s despair and dislocation at the turn things have taken.


Elizabeth Spires’ introduction to Lindsay Stuart Hill’s poems, is a further example of what I take to be the two implicit themes of the issue: the ongoing attempt to create a taste by which new work can be appreciated, and the exploration of dealing with loss and starting over. Spires points to the loss, especially in “Nanquan Kills a Cat,” but also explains how the poem works in illustrating the ‘fundamental tension between Buddist compassionate detachment and the basic human need to attach.” She does indeed teach us how to read an American poem from a Buddhist perspective. And if you assume that learning something new, starting over, inevitably involves slowing down perception while the world goes on at the same pace, as of course it must, then Susan Falco’s memoir, “Catcher’s Hang,” about learning the art of trapeze, adds further depth to the development of the overriding theme of the collection. Dan Wakefield’s introduction to this piece is quietly the best introduction in the issue; he associates the metaphor of the acrobat with his own yearning for grace, in short, he tells us what the work means to him.
Readers interested in following the theme of loss through the issue should not miss Jynne Dillling Martin’s “Dropped Things Are Bound to Sink.” Beginning with an image of a cricket against “this enormous planet/ attesting to a cosmic order,” the poem sweeps like desert wind through images of nature and history. It is a really smart “Ozymandius” that, in graceful edgy syntactically complex couplets arrives at an image of the end of the world.


Beneath a hot sun that offers nothing I do not already own,
I suck the meat off a great seabird, kick sand over his crooked bones.

Ms. Martin’s poem bears no similarity to the work of Alice Hoffman, yet Hoffman’s piece, published here, ”Treasure,” partakes in a similar aesthetic: twisting a father-daughter relationship such that irrevocable damage is done by the character of the father’s cruelty and longing for the things of science, a father whose avarice “left him charred” in a world where much else is charred beyond recognition. Hoffman is the guest editor of an upcoming issue. This story suggests that issue will be edgier and uncompromising in ways we have not seen in this writer before.


The exerpt from Sue Miller’s new novel, “Burning Summer” about a woman married to a man who is fast losing his mental faculties, also addresses issues of loss and getting by with some sense of self intact, despite the day to day compromises. Howard Norman’s piece “Next Life Might be Kinder” in a background that includes a vivdly if succinctly described exhibit of Robert Frank Photographs, against a story told by a truculent, but ultimately comic, unreliable narrator. Jay Neubegorn’s “Tag Sale” from his novel, The Other Side of World also deals with impending loss, this time though, through the mind of a character convinced of his mediocrity, almost unable to see how funny his version of events is.


Suffice it to say this is an issue with many pleasures and challenges. It is clear to me that whatever else DeWitt Henry is, teacher, writer, innovator, he is a brilliant and exciting editor and that is reflected by the work in this issue.
Doug Holder at 7:41 AM No comments:
Share
‹
›
Home
View web version