Review of AGING HEAD IN THE CLOUDS, chapbook by Alan Holder 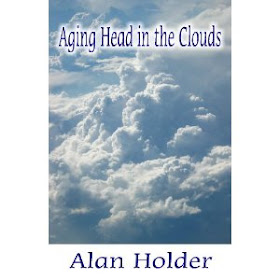 “Aging Head in the Clouds” is an “I can’t believe this is me” little book about aging on into your 70s by a long-time academic professor and writer. However, there is little that is academic in the book, which has the incredulous theme that he himself really has to grow old and die, just as his parents did before him. He goes to the hospital, the cemetery, and to his own private space to come to terms with this most human predicament.

The book starts right out on theme: “Jesus! Who is that geezer?” he exclaims in the first poem, “On Being Shown a Recent Photo of Myself”. “It’s bad enough having to view/the daily man in the mirror/…did I need to look at this cruel product/of a camera apparently featuring/a fast-forward gizmo,/did I need to take this appalling peek/into my future?”

But as the saying goes, “the future is now” so being a poet, he put together this chapbook about aging. It’s a quick read and does not get bogged down with symbolism. Yet by the end, I did think, to myself, Oh no will this be me, too?

In the poem, “Dead Parents”, he quotes Satchel Paige, who said “Don’t look back. Something may be gaining on you.” He replies, “Don’t look forward either,/for you are surely gaining on them…/just by taking a walk, watching TV,/brushing your teeth/…just by breathing, for God’s sake.” He points out that at age 77, he’s already ten years older than his father was. “Will my dead parents know my face/if they see me in heaven?”

He paints a natural yet basic impression of watching himself grow old and born to die… But while he has a good, readable style and voice, he has apparently let go of all that academic language he most certainly must have used in his past. Because this is it!

Born in Brooklyn, New York, he got a doctorate at Columbia University. He taught for 40 years at a number of colleges and universities, including Hunter College of the City University of New York. He also taught at Columbia, University of Vermont, University of Southern California, and Williams College. At present he teaches an adult-ed course on poetry in the Ridgefield, CT public library. He published four books of literary criticism, and other works of nonfiction and poetry in a number of journals. Finishing House, his publisher, also published another chapbook, “Opened: A Mourning Sequence”. He currently lives in Westchester County, New York.