The Plot of I1 Trovatore and other poems Gerald Locklin. 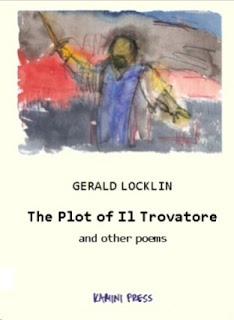 
Gerald Locklin is a well-published teacher, writer, and poet. A Locklin poem is valued currency in the small press. Hell—I have even seen a Locklin play reviewed in the old gray lady herself “The New York Times.” The guy gets around. Now , Henry Denander’s Kamini Press has released a chap of poetry by Locklin: “The Plot of l1 Trovatore…” Denander, is based in Sweden…I think he summers in Greece, well, he is way out of my league anyway. I usually summer in the South, South Boston that is , on the better side of Carson Beach. Denander’s small chapbooks are wonderfully illustrated by Denander himself, and to be published by him is a sought after commodity. In this chap there is a color sketch from the Verdi opera that is the title of the book, and a flattering sketch of the author in the back.


In his title poem “ The Plot…” Locklin brings Verdi’s opera down from its operatic heights to the shallows of the vernacular:

“…it’s described as being complicated
but it’s really not that bad:

simple as blood, guts and nuts.”

In the poem ”Roll, Baby, Roll” the poet uses Verdi’s prolific output as an example of going with your artistic flow, don’t look back, and be like the rabid dog chasing the meat truck or in this case your artistic destiny:

“ there’s a lesson to be learned:
when you’re on a roll,
keep pedaling like crazy
and pray it lasts fifty years,
while turning a deaf ear
to the envious
who will be urging you
to “get a life.”


Review by Zvi A. Sesling

Here is a book with a different use of language and, perhaps, an over-the-top way of presenting images. Take, for example, Ghost Ship, which opens:

Our telescopes we focus on a very strange

their crows’ next thread.

In a number of his poems Russell succeeds in projecting the energy and movement. However, a poem must also be something the reader can experience for himself or herself and that is the level to which Russell is less successful—at least on the written page. Instead of reading this book I might be better off hearing Russell read his work. Reading this is a bit like being handed words to a song, but never knowing the tune.

So let me say what I like. It is 169 pages of poetry, which is big enough. You don’t get short changed on the number of poems. And there is a theme to these poems.

What I don't like about the book, starting with the almost religious cover of flower and water and quote: Shuffling through the Fall of sleep/fond dreams begin to whisper.

Poetry has always been subjective. You submit poems to Magazine A and get rejected. Send the same poem to Magazine B and voila! It’s accepted. So it is possible that while I am not a fan of this book, others will be. That’s what makes poetry so diverse – there’s always something for someone in almost every book of poetry.

Russell, by the way, is an Englishman who has become a U.S. citizen. He holds an Honorary Doctorate of Literature from the London Institute for Applied Research and Docteur des Lettres, Pyschologie et Litterature, from the Academie Des Sciences Humaines Universelles in Paris. He is an Honorary Professor Humanities at the Institute of Higher Economic and Social Studies in Brussels, Belgium and was chosen “International Literary Man of the Year for Se rvices to Poetry by the International Biographical Center of Cambridge (England). In 1998 and 1999 he received the grand prize from the American Poetry Association and has been admitted to the Academy of American Poets.
Doug Holder at 5:15 PM No comments:
Share

The award for poetry for the annual Mass. Book Award http://www.massbookaward.org
went to Henri Cole for his collection: "Blackbird and Wolf"

Honors went to Robert Pinsky for his collection: "Gulf Music" and...

Moira Linehan for her collection "If No Moon"

Also Junot Diaz ( who will be in the Somerville News Writers Festival Nov. 22 http://somervillenewswritersfestival.com) won the fiction award for "The Brief Life of Oscar Wao"
Doug Holder at 6:44 PM No comments:
Share
‹
›
Home
View web version