Set against an NYC skyline, Cirelli winds his tales about his dad, love for words and musicand gives a human element to all three. In “Lobster with Ol’ Dirty Bastard”, Cirelli is on a gangsta lean in a baby Benz blasting old school, riding the seemingly safe daytime streets of craft-poetry, then turning down those dark alleys where the tension and bravado are thick like “. . . machetes in the air waves”. Cirelli definitely makes it with the Hip-hop heads with his rap culture overtones. (Example: Ol’ Dirty Bastard, real name Russell Tyrone Jones was a member of the Wu-Tang Clan, the rawest M.F.’er of that influential Hip-hop group). There’s more: the titles of each section are propsto albums past and present like, “3 feet high and rising” by De La Soul (1989),“The headphone Masterpiece” by Cody Chesnutt (2002), “The Love Below”by Outkast (2003) - and that’s just the section names,
I can go on and on ‘til the break of dawn.

At every turn, and twist of words, Cirelli reveals. New York City is Loud is a poem ripe with original descriptions, depicting a world of “skyscraper fingernails”,
police sirens that “scream like a phone call/ at 4 am to explain /
how the last drop of air clicked away/ from your father”.
Even, the nudge of a glassy leather shoe to
the flank of a homeless man making the sound like kicking a tin can.

I guess, when you’re a Hip-hop poet with an MFA, just the mere spanning of the
extremes will pop up in your writing. And it hollas in “Lobster . . .”
“Cutting Stevens”, is a recount of Cirelli being hired to teach a literature seminar,
“ . . . a snow flake, the son of a snow-dealer. . .”, where, the works of
Wallace Stevens were to be cross-compared with the rapper Young Jeezy.
“ . . . who dons a glittering snowman / on his chest. T
he snowman being the metaphor / for cocaine of course.”
To the speaker, “It was like winter on Pluto”.

“The seminar was part
of the university’s campaign to appeal to “urban”
students, and they named it Lit-Hop . . .
The snow piled up like penguins
and sea lions, and many classes were canceled
that semester. To rectify, I had to cut lessons,
lop the hands off of poets, remove the icy watches
from rappers.”


He also gives himself big lee-way when it comes to his own work.
In “Best Use For My Poems”, the speaker is at a poetry reading where no one’s
feeling him and his words. His three-year-old nephew picks up his uncle’s poems,
and besides using it as a billy club, a blurry baton and then a telescope . . .
“the long white / cylinder of my unmoving words, and held it to his mouth /
like a mic, and lip-synced some tongue I was too old to/ remember”

Cirelli’s work is tagged like a wall with the themes of music, his father and poetry,
in a loud-ass montage of catalog. “Lobster . . .” is an all-night convenience store
of lyrical goodies with no Twinkie-fluff in sight, “Lobster . . .” is also a
consignment shop of Hip-hop history. 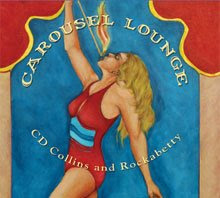 
I’ve always loved the South, albeit from a sly or reverent distance. Some associations for me as a poet/singer/actress are: ash blonde wigs, Emmy Lou Harris’ “Quarter Moon in a Ten Cent Town,” drinking Dr. Pepper and rum in a thunderstorm reading Truman Capote and bawling for my boyfriend from a porch in New Orleans, the sulfur smells in Alabama on a theatre tour, a cavernous motel lounge in Little Rock…the banana trees in Houston, the blue grass that entices my feet to dance, Elvis and Dollywood, the tragic-comedy epic movie “Nashville.” My images are impressionistic though, seen as a transient, not from the eyes of a native birch tree. I’ve never had real “mountain laurel” roots or the deep heart-break over coal mining damage that this multi-talented artist (writer, spoken word artist and short story writer) now a Somerville native, CD Collins, does. This self-proclaimed Southern tomboy, and once high school English teacher has managed to make the leap to successful spoken word recording artist in what she calls “chilly” New England. As she tells it in her artist’s statement:

I write to confront moral complexity, to discover my best self, to dig deeper than the first impulses of jealousy, rage or revenge. I write to discover beauty in the grotesque and the ordinary.

Because of this devotion to “dig deeper,” Carousel Lounge manages to conjure musically and poetically much more than roots-slinging. Her 3rd CD: this one is an artfully moving mosaic of time wanderings and tales from her native Kentucky, set to country rock/blue grass/goth rock –her group Rockabetty --that could go toe to toe with any rock band. Its unusual chord bendings and blending of genres remind me of Morphine, of great Nashville session bands, of T-Bone Burnett’s work.
I’ve had the pleasure of meeting CD Collins once, at the Newton Poetry Reading series a few years ago. Kind yet grounded, her fiery talent was clear. She had a couple of players with her then, maybe a fiddler and guitarist, not the full-blown kick-ass country-rock ensemble featured in her latest CD. By the way, it thrills me that there’s another woman out there doing what some would call, “Chamber Rock” again. Historically it was probably Anne Sexton who may have kicked this tradition off – the poetic enchantress of smokes and martinis, bridging madness and sanity as suburban housewife, with her band, “Your Kind.” Well, that was more than twenty years ago. CD is decidedly sober, funny, Southern “The men were farmers and carpenters – they worked, not worked out…” and one other poetess with mighty charisma who’s dared to put dramatic beats and vibes behind cohesive poetic works. She’s also a proponent of gay rights and an environmental rights activist. It’s her albeit skewed objectivity that gives her that brilliant story-teller’s edge.
My first CD, Being Visited, is surreal, dense and challenging, a brew of spoken ambient tracks, pop ballads and reharmonized jazz. It ain’t nothin’ like what CD Collins does real well. She, by contrast, casts a laser beam light of memory on her coming up years, constructing edgy concrete narratives of real times and rough loves, living proof stories mined from adolescence and those years when America was truly and deceptively expansionistic in its love for the land, its neighbors and its children. It was also easily distracted by speed boats and pop music and struggling with messy oppositions of race, convention and politics. CD emphasizes more than once that in the early 60’s time was slower, folks talked more (on party lines, cheaper than one number in most neighborhoods) and bonds were knitted together slowly like winter sweaters. Yes, she kids in one interview, they do have real seasons like us, “down there.”
It’s not that she plays it all straight –cause the lady’s too intriguing not to drop in some dissonance and juxtapose say, the Rolling Stones with a tomboy playing b-ball. That in one snapshot is CD herself, a girlfriend of the band in a letterman sweater, tossing the ball in from half court. Then there’s the off-beat Southern weirdness of it all –the 6 year old serving your bass for dinner, or the mascara blackened face of a beat up girlfriend or the bourbon bottles strewn across the living room carpet. She gives us the twists but she doesn’t over-warp the somewhat warped landscape too much so that we can’t hear the haunting crickets and appreciate the sexy gleam of Brillcream. CD’s got the gift of a captivating voice and she lays it out in a smooth as mint julep voice, never missing a moment, with some lovely elaborations like lacey layers of flute, soprano voiced mountain ridges hanging over “I am Losing Everything” and on the bottom, a consistently groovy bass.

Vocally she owns her territory (“knows her chicken” as the samping girl-group Cibo Matto once sang in “Viva la Woman”) but her attitude is disarming, compelling and never strident. There are some knock-out punches in this collection which spans from the darkly declared wisdom of “Prologue” in which Collins’ explores the truth behind the way you both trust and mistrust anyone sitting across from you in a small town because they know “your Daddy and your cousins,” to three takes on the Kentucky eating parlour, “Carousel Lounge” to the wildly funny “Attention Deficit Disorder” in which in a Laurie Andersonesque sketch of automated voice mails, she combusts the efficiency/sanity of our modern techno inventions and asserts the right to a crazed and incensed persona.

The CD winds up with a multi-lingual anthem called “City of Dreams” – a title used once by the Talking Heads band as well. Its got that open-ended wistfulness of packing up your red goblets and moving North (as CD once did,) the magic of a jazzy Parisian night, of the stacatto Spanish of the Gulf of Mexico.
It’s the break for the wide world horizon of an artist who’s been viewing her small town under a microscope.

CD Collins may say that her original home planet is a 3rd world in a 1st world and decries its diminishing, but she wonderfully engorges that world with life, light, risk and the beauty of looking back. Writers always balance past and present, looking backwards to move us forward. In this sense, CD Collins has given us a very classy and original Southern Goth episode to treasure. She casts a net toward fathoming more than her self-scorned starched dresses and patten leather shoes or the hilarious dinners that ended with dancing or gunfire, but includes a rich vein of U.S. history, the intricacies of the land and generational ties.

For me, it’s got the brio and magic of “Twin Peaks.” And it breaks new ground for all spoken word artists using live music to enchant their words.

Carousel Lounge is available on www.cdbaby.com, Porter Square Books and on-line at www.cdcollins.com. When you buy any of CD’s compact discs, 25% of the proceeds will be donated to the Ohio Valley Environmental Coalition to help fight the environmental devastation of mountaintop-removal mining. Also, catch her on tour by going to her website for dates in your area.