BUTTONED INTO HISTORY by Richard Moore 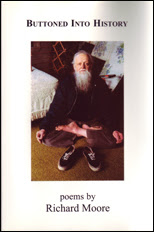 After William Carlos Williams and Wallace Stevens, after the advent of language poetry, post-language poetry, free verse confessional poetry and the prose poem, metrics have become dangerous territory. Most of the poetry being published today is unrhymed. Much of it lacks meter, or, some might argue, any rhythmic precision at all. (The work of Maxine Kumin and Richard Wilbur being among the major exceptions.) To our modern ear, blank verse has come to sound stilted, while trimeter and tetrameter remind us of nursery rhymes. Young poets chafe against the restrictions of rhyme schemes and the potentially deadening regularity of iambs.
Enter Richard Moore. Moore is not a young poet, nor is he afraid of traditional verse. “Buttoned Into History” is his eleventh book of poetry, and his energy shows no sign of flagging. These poems are fierce and pointed, but full of humor and intelligence. Almost all the poems are in rhyme, but for all the seeming formality, they feel loose, and at appropriate moments even slapdash. The greatest skill in employing poetic form is to make the strictures conform to the poem and not the reverse. Moore succeeds in this with surprise ease.
Notice the adroit use of feminine endings in the beginning stanza of “Politics”, one of the first poems in the book:

O it’s so dumb to mix
science with politics!
Our Parties think man’s curse is
various universes,
the way it all expands,
ordained, out of our hands.
Laborites think our fate
lies in the Steady State,
whereas the other gang
believes in the Big Bang.
Gutsy the lad who lives
with those Conservatives:
their cosmos mere erosion
after God’s mad explosion.

The unstressed last syllable in “curse is” / “universes” and “erosion” / “explosion” provide a welcome break to the singsong regularity of trimeter, and we know immediately that we are in experienced hands.
Politics is a major theme of the book. Moore is, to put it mildly, disenchanted with the current political scene. Here is the third section of “Three Little Money Songs”, with the heading “For the Inauguration of President Bush, the Second”:

What else need be said?
When Moore’s topic ranges beyond politics, the poems seem to breathe a bit more, although he maintains his impressive formal technique throughout. One of the risks of rhymed verse is coming to rely too much on end-rhyme to create the music of the poem. Moore’s diction – ranging from the lowbrow (“soon we’re talking dirty”) to references to Sophocles and the great Ukrainian writer Gogol – occasionally does fall into flatness within a given line. When he strives for alliterative intensity, however, he achieves it – and how. His internal rhymes and assonance are reminiscent of the lamentably neglected poet Louis MacNeice, who could rewrite an insurance brochure and make it sparkle with linguistic ingenuity. Here is Moore’s gorgeous “Breakfast in Sussex”:

The sunlight splashes, fills
with glitter our tilled hills,
tractor-chopped, clipper-clipped,
and busy farmer-whipped,
their last ounce of production
sucked out by all that suction.

Our green mammary mounds
where sheep with soothing sounds
through hedge openings pass
like grains through an hourglass –
thus human life engages
the great machine, the ages;

and pulled to pieces...hush!
Breakfast is over. Brush,
as far as you are able,
metaphors off the table,
see what the world becomes.
A firmament of crumbs.

There is philosophical intensity in this as well. Without the glue of metaphor, into which all language inevitably degrades, the world crumbles. Language is a necessary screen over experience, a filter through which our thoughts travel into the world. But these thoughts themselves are metaphors, methods of interpretation. Without our constant self-talking, what world is left? What silence?
Moore’s poetry encourages such philosophizing. It encourages strong reaction, moments of aesthetic pleasure, moments of laughter. Moore accomplishes what all poets hope to accomplish with their work: he encourages us to be more human. 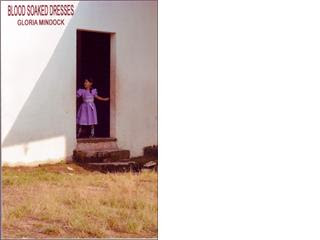 
This poetry book is about the atrocities committed in El Salvador during the civil war from 1980-1992. It is based on my talks with El Salvadoran refugees in the 1980's and years of research.

In San Miguel, many people are being exterminated and the atrocities continue to this day.

I hope you will order this book. The people of El Salvador should not be forgotten. I hope to carry this message on behalf of Rufina Amaya, the only survivor of the massacre at El Mozote, who died of a stroke in March of this year.

In her fascinating poem cycle, Gloria Mindock jolts back into memory the roots of El Salvador's present day violence. Mindock coaxes to the page the voices of the dead who lie, less in peace, than in restless obsession with the atrocities they suffered. She brings forth as well the voices of the living who seem startled to find that they died somewhere between the horrors they witnessed and the grave they have yet to lie down in. Blood Soaked Dresses is a beautiful, harrowing first book.
--Catherine Sasanov

We are reminded of Cezar Vallejo's witnesses: bones, solitude, rain, and the roads -- that we are tied to each other in beauty and suffering, life and death. Gloria Mindock's poems grant us the voice of a soul caught on a limb between the promise of peace everlasting and impossible resurrections. Poem after poem we are asked to uncover those whose bitter ash weeps over the world, and no other country/wants to see it. This book is written from a compassionate heart that whispers and grieves, one that isn't afraid to hold its gaze.
--Dzvinia Orlowsky

A poet must never shy from the necessary, no matter how hard it is. In poetry that is both elegant and brutal, Gloria Mindock exposes the horror of the Salvadorian conflict especially on women. Though Salvador has faded from the front pages, the war has reincarnated in other countries on other continents making "Blood Soaked Dresses" completely contemporaneous. This poetry possesses, as Yeats said, "a terrible beauty." And we need it now more than ever.
--John Minczeski

The reader of Blood Soaked Dresses is enriched by Mindock's power and commitment. She has earned a place among our great protest poets, reminding us, with lyric tension, that social justice is our constant and necessary concern.
--Simon Perchik
Doug Holder at 1:03 PM No comments:
Share

Tom Perrotta is an American novelist and screenwriter best known for his novels “Election” (1998) and “Little Children”(2004), both of which were made into critically acclaimed, Golden Globe-nominated films. Perrotta co-wrote the screenplay for the 2006 film version of Little Children with Todd Field, for which he received an Academy Award nomination for Best Adapted Screenplay. Perrotta will be the headline featured reader at the Somerville News Writers Festival Nov. 11, 2007. I interviewed Perrotta recently for “The Somerville News.” For information about the Somerville News Writers’ Festival go to: http://www.somervillenewswritersfestival.com


Doug Holder:Tom for the last twenty-five years I have worked at the psychiatric hospital "McLean Hospital" in your hometown of Belmont, Mass., so I am aware of what the town is like. In your book "Little Children" you seem to fashion the setting after a town much like Belmont. The Boston Globe once opined that Belmont was the most "boring" town in the state. How is it for a writer?


Tom Perrotta: I live about ten minutes from Harvard Square, so my cultural life isn't limited to Belmont.


DH:From some of your novels that I read I get a sense of contempt for the 'burbs. Are you of the mindset that the suburbs are the home of "broad lawns and narrow minds" as Hemingway once wrote?


TP: I have no contempt for the suburbs whatsoever, and am puzzled when people observe that about the books. I grew up in the suburbs and live there now. "Little Children" isn't so much about a place as it is about a time of life--the period around age 30 when adulthood sets in for good--and about the ambivalence a lot of people of my generation feel about parenthood. Any of the dysfunction found in the suburbs can be found in the city and in the country, too.

DH: Were you influenced by any of the "chroniclers" of the suburbs such as: Cheever, Richard Yates, or Updike?


TP: Updike's Rabbit books are a huge influence. I particularly love "Rabbit Redux," the novel in which Updike creates a microcosm of the 60s in one house. I tried, in my own modest way, to achieve something similar in "The Abstinence Teacher."

DH: Did you ever dabble in poetry?

DH:This will be your second appearance in "The Somerville News Writers' Festival". We are quite grateful. I am aware that you will be on tour and will be reading at larger venues, across the country. Do you have a commitment to the local literary community?


TP: I love the local writing community--I think it rivals any in the country--and I enjoy my hometown events way more than I enjoy being on the road,


DH: Are you a frequent visitor to Porter Square Books and McIntyre and Moore?


TP: They're both excellent stores, though for some reason I don't get to them as often as I'd like. I end up doing a lot of my book shopping in Harvard Square.

DH: Can you tell us briefly about your new book: "Abstinence Teacher?"


TP: "The Abstinence Teacher" is a novel inspired by the culture war that's been going on for the past twenty years or so. It has two main characters, one a liberal sex education teacher, the other a born-again Christian, who live in the same community, and whose daughters play on the same youth soccer team. The novel explores the separate worlds that they live in, and also tries to shed some light on the things they have in common as well as on the things that divide them.


DH:It is a popular notion in literary circles that Hollywood can ruin a writer. William Faulkner said that if you are going to be ruined, you could be ruined anywhere--or words to that affect. What's your take?

TP: Faulkner spent some time in Hollywood, and it didn't seem to ruin him. I like movies, and I like writing for them. I just don't see any downside to it, as long as I can set aside the time to keep writing fiction.