Review of Drinking The Light by Laverne Frith

Review of Drinking The Light by Laverne Frith

Laverne Frith’s Drinking The Light is an aesthetically astute poetry book. At first glance, the reader may think the 29 page chapbook will be a religious experience, but it isn’t really that. It’s a highly crafted collection of poetry that seems to teach the reader a lot of things, especially about beautiful writing, visual art, photography, as well as nature.

Through economy of words, enjambment, and concrete imagery, Frith explains everyday situations and aesthetics with immediate insight. He teaches the reader about light’s importance in photography by writing about life and inanimate objects and the effects of light upon them. With ease and skill, Frith has the reader “Drinking The Light”, understanding photography and art and poetry in a reading experience that is visually oriented.[1]

In his opening poem, “Toward Clarity: The Power of Contrast” (p. 3) , Frith lets the reader know the speaker of the poem is interested in art.

I find the picture

I play it stark

strip out the middle tones

go from negative to positive

to negative to positive

over and over again

Here Frith has created a beautiful, flowing piece about a “picture”, probably a photograph, that metaphorically sets the tone for the chapbook to follow. Like a photograph with a “muddled” or disordered scene, the speaker reflects that the book to follow isn’t clear in its intentions. This is similar to life’s path. The speaker seems to suggest that the following poems contain messages that are hidden, as he says, “here I find/all the subtleties//for my attraction”.

The speaker is interested in photography and the effects of light and immediately lets the reader know the journey isn’t going to be that clear, a lot of contrasts will happen, as often seen in photographs.

And, yet, the experience will probably be a smooth, flowing and speedy one, as Frith indicates through the poem’s lack of punctuation. Frith doesn’t even capitalize any of the words except the word “I” which give a focus – a focal point – to the piece and the chapbook.

Frith writes poems about light several times in the book. “In Reluctant Light” (p. 7), “In A Vase” (p. 11), and “Drinking The Light” (p. 24), the speaker tells about the dramatic effects light has on subjects and in scenes. Frith has captured with words visual images that a photographer or a painter portrays in artwork.

In “In Reluctant Light”, the speaker says, “the window sill is deep/in cobalt blue/bottles lined abreast//so many varied shapes/and densities/translucent warnings”. Frith has described this scene so articulately and with such clarity that the reader can visualize the setting as if he was viewing an actual photograph. The reader can easily imagine “the bottles filled/with dry flowers/herbs and ornamental fans” written further down the poem, as well as the “cobalt blue/bottles lined abreast” because Frith has written so concretely. He does get a bit abstract and “muddled” when he explains “so many varied shapes/and densities/translucent warnings” and about “contained regret/overlaying anxious moods/of the afternoon”. But this can be attributed to the darkening of the daylight where “a candle here and there/I only need/to strike a match”. Through words, Frith has captured the tone of light so important to understand in a photograph.

Again, light is a focal point in “In A Vase” where “of early morning/window light/mums float//lower tendrils/spread/in counterpoise”. The reader can easily imagine this quaint scene. Frith has created a beautiful poem by making the reader visualize “window light” hitting the “mums (that) float//lower tendrils/spread/in counterpoise.” This poem is written at a distance, as if we are viewing a photograph.

“Drinking The Light”, which is the title of Frith’s chapbook, is written at a distance, after Frith has viewed a photograph. The person who took the photograph remains a mystery, but the concrete imagery again plays an important part in helping the reader visualize the artwork being described. The effects of light in a dark setting are revealed. The speaker explains:

in the wee hours

on this vacant street

their window dresses seize the stage

from their broadbrimmed hats

obscuring the plasticity of face…

We have a sense of time, place, subject, and light so clearly and gracefully depicted through

the use of words.

In Drinking The Light, Firth has also poetry about things that live in nature. The poems “The Jay” (p. 8) and “White Arachnid” (p. 9) describe a blue jay and a white spider and a moth doing what is expected of them. In “The Jay”, Frith writes:

there are so many

blue aspects of the Jay

that are so difficult to capture

with its flitting nuances

of hunt and capture

from break of day

The speaker tells the reader of his observations about the Blue Jay’s habits, “with its flitting nuances/of hunt and capture” all day long or “from break of day/through transient shadow/through bright full sun. Frith has evoked visual imagery, like that viewed in a photograph or a painting, through economizing of words.

Frith portrays the spider in a distinctive light in his symmetrical poem “White Arachnid”, a poem which is offset in the final stanza with its single line “will not wait.” Just as spiders have the tendency to surprise their prey – and human beings, too –, the speaker “Startle(s)” the reader at the start of the poem. Frith has capitalized the word “Startle”, which is what the spider has done to the “waiting moth” who has been captured in the spider’s web spun “on the night glass”.

The moth couldn’t easily spot “the night glass” in the “ephemeris of the night” with its “incandescent light”. Frith has created a beautiful piece about the habits of the spider and “a waiting moth”, the captured prey. Frith seems to have viewed this scene often enough to realize

“Neither will rest for long/The permitting night//will not wait.” Through Frith’s simple observations, the darkness of the night is visualized in its “incandescent light”. It’s as if the reader is reading a photograph made from words.

“Arrival Of The Normandy Train At The Gare Saint-Lazare” (p. 17). These poems are also about the tones of light in artwork and very good readings.

All in all, Laverne Frith’s Drinking The Light is aesthetically pleasing and a thought-inducing poetry read. If you have an interest in light and its effects in art, photography and life, you should enjoy reading this chapbook. And if you don’t necessarily want to put your thinking cap on and learn about light’s tone in various stages, you probably still will find Drinking The Light a delight to read. 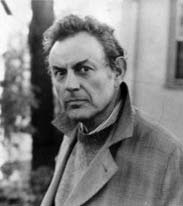 From Mist To Shadow: Poems by Robert K. Johnson


Fred Marchant (Director of the Poetry Center at Suffolk University) writes of Johnson’s work: “His is an art of transparency, an art in which language through its own devices becomes nearly invisible and what is seen through the scrim is usually an epiphany… The ordinary life is under the poet’s gaze transformed into something approaching the sacred…”

“From Mist To Shadow” is an apt title for Robert K. Johnson’s newest collection of poetry. The poems offer a wide range of subject matters and styles. The book’s first pages concern the poet’s early years, and the final pages his later years. In between we have meditation on family, literature, career, movies and a host of characters who have weaved in and out of the poet’s life.

Robert K. Johnson was a Professor of English at Suffolk University (Boston, Mass) for many years and is the author of six collections of poetry. His work has appeared in a wide variety of magazines, journals and newspapers. He is currently the submission editor for the Ibbetson Street Press of Somerville, Mass. 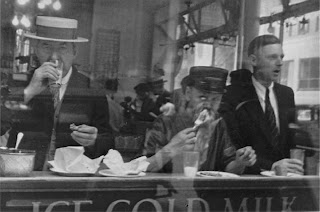 I HAVE MEASURED OUT MY LIFE IN COFFEE SPOONS.

I was staring at my usual oatmeal scone at the Sherman Café in Union Square, Somerville last Sunday when I realized to some extent that : “I have measured out my life in coffee spoons,” as T.S. Eliot wrote. For as long as I can remember coffee shops have been a balm; a comforting presence in my life. My late father was a consummate New York City PR man from the 1950’s until his death several years ago. He wasn’t a coffee house sort of guy, but he did frequent the popular watering holes of the time like “P.J. Clark’s” and the “Twenty One Club.” And even in his 80’s he hopped onto the train into the city to met his old cronies from back in the day to down a few and chat. My late uncle Dave Kirschenbaum, a noted rare book dealer, and the owner of the Carnegie Bookstore on New York’s Book Row, had breakfast at the same hotel near Central Park for over 50 years. When he died they affixed a plaque to his table with his name on it.

Well, I have not frequented such illustrious places on a regular basis, but through most of my 52 years there has been a coffee shop, house, or counter in my life. When I first moved back to Boston after college in 1978 I lived in a rooming house on Newbury St in the tony Back Bay section. I used to habituate the counter at the Guild’s Drugstore which was on Boylston Street across from the Lenox Hotel. I always had a glorious hash and eggs that stuck in my stomach like an anchoring lead weight. The sight of a bright yellow yoke sun oozing over a pungent hump of corned beef hash was a simple, daily pleasure. Behind the counter was Ethel, a tough-talking, middle-aged lady from Southie who spoke with the heavily accented r “s” of a true native. She had an arsenal of stories about life in the Colonial Projects, about her ner-do-well husband, and the hijinks of an insufferable son. Both food and anecdotes were generously served to all. David Brudnoy, the WBZ talk show host and cultural critic was a regular. He was always leafing through a stack of newspapers, while he ate a rather pedestrian meal of toast and coffee. I never got up the nerve to speak to him, although he was my idea of what the urbane, man-about-town should act and look like. There was also Walter, the obese candy counter clerk, who had an impressive breakfast of a half dozen eggs, several English muffins wading in butter, and of course a pile of grease-infused hash browns. Walter was forever talking about the novel he was working on and nobody seemed to want to challenge that notion.

Later, Brueger’s Bagels and the Au Bon Pain became my morning refuge. Over a series of regular breakfast with my friend Richard Wilhelm, we birthed a literary
baby at a corner table and we named it the “Ibbetson Street Press.” Later, at the bustling Au Bon Pain in Harvard Square, poet Harris Gardner and I came up with the idea of the “Bagel Bards” a weekly writers’ group that meets at the Au Bon Pain in Central Square, Cambridge and Davis Square, Somerville throughout the year.

When I moved to Union Square some 6 years ago, I had a short-lived affair with the Grand Café. I even managed to organize a poetry reading there, and nurtured a friendship with the owners. But just like friendships- businesses are fickle and they come and go.

And now the Sherman Café has been a long commitment of mine. I mean I have gotten more than a few poems from the fertile “grounds” of the place. I am such a steady presence that the staff becomes concerned when there is a slight deviation of my pro forma order—from iced to hot coffee for instance.

But there is something about these shops. Amidst the chatter I have clarity and concentration. Amidst the din I can write. When I bite into a scone I am home. Maybe this was a reason the writer Isaac Bashevis Singer used to haunt the cafeterias in New York City.