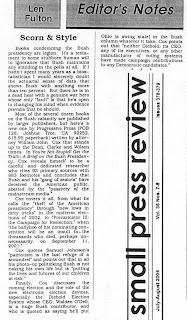 A Celebration of Somerville’s Small Presses

The small or alternative press does not have a “small” place in literary history. Poets as diverse as Whitman, Frost, Ginsberg or Bukowski, have cut their teeth in the world of little magazines and small presses. The thousands of small presses (defined as press runs of fewer than 5,000 and less than twelve titles per year) have provided a way for the emerging poet to have his or her art find an audience. Major university libraries like University of Buffalo, Brown University, and the University of Wisconsin/Madison have huge collections that archive many of the booklets, chapbooks, broadsides, etc… that have been produced to date. For instance: Mike Basinski, the curator of the University of Buffalo Poetry and Rare Books Collection, is dedicated to collecting first editions poetry books, etc… from all small press poets and publishers from around the globe.

The city of Somerville is a city that has a rich history of small presses. From Robert Smith’s still thriving “Yellow Moon Press,” to the now Brookline-based Zephyr Press; there has always been a number of small presses putting out product. Magazines such as: “Dark House,” “Aspect,” and the” Boston Literary Review,” all had roots in Somerville.

On Feb. 19 2007 at 8PM three Somerville small presses, “Ibbetson Street,” “Sunnyoutside,’ and “Cervena Barva Press” are going to be part of a celebration of the city’s small presses at Club Passim presented by Richard Cambridge’s resident “Poet’s Theatre” The event will include selected readings by poets from the said presses such as: poet Catherine Sasanov, Mary Bonina, Timothy Gager, Lo Galluccio, Ann Carhart, Philip Burnham, Nate Graziano, Deborah M. Priestly, and Molly Lynn Watt to name a few. There will also be a book table with books from all the publishers.

All three founders of these presses will be on hand to introduce their writers and give an overview of their enterprises. Dave McNamara, founder of sunnyoutside http://sunnyoutside.com/ and a graduate of Emerson College’s Publishing Program, will talk about his dedication to innovative writing as well as production values with regard to design, font, paper, and illustrations. Gloria Mindock, the founder of the Cervena Barva Press, http://www.cervenabarvapress.com has a long history as an editor and a publisher of the defunct “Boston Literary Review,” as well as extensive experience in avant-garde theatre. Mindock will talk about her popular literary e-newsletter as well as her growing publication list of poetry, and fiction titles. And yours truly Doug Holder will talk about the “Ibbetson Street Press” http://www.ibbetsonpress.com, and the 30 plus books and twenty journals they have published since 1998.

The event will be a great introduction for the novice as well as the more established poets and writers to familiarize themselves with our rich literary terrain. 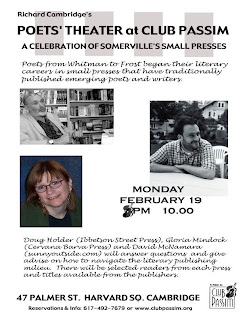 
Chicago Poet Jared Smith, who recently had an essay on being a poet in Greenwich Village in the 70’s in the Wilderness House Literary Review http://www.whlreview.com/ will be reading At Bunker Hill Community College Feb. 8 2006 Reading Starts at 1pM Jared will be interviewed by The Somerville News arts/editor the following day.

Jared Smith’s sixth volume of poetry, Where Images Become Imbued With Time, will be published by Puddin’head Press this spring. His previous five volumes include: Lake Michigan And Other Poems, (Puddin’head Press, Chicago, 2005): Walking The Perimeters Of The Plate Glass Window Factory (Birch Brook Press, New York, 2001;) Keeping The Outlaw Alive (Erie Street Press, Oak Park, IL, 1988;) Dark Wing (Charred Norton Publishing, Camillus, NY, 1984;) and Song Of The Blood (The Smith Press, New York, 1983.) His CD, Seven Minutes Before The Bombs Drop can be downloaded from i-Tunes, e-Music, or any digital download service worldwide. It is from ArtVilla Records. A new CD with alternative blues musician Lem Roby is forthcoming later this year.

Hundreds of his poems, essays, and reviews have appeared in literary journals over the past 30 years, including in The Smith, Small Press Review, Spoon River Poetry Review, Kenyon Review, Poet Lore, The Iconoclast, New York Quarterly, Rhino, Illinois Review, The Pedestal, Bitter Oleander, Bitterroot, and many many others. His work has also been adapted to modern dance at New York’s Lincoln Center for the Performing Arts, and to stage in Naperville. He has given readings and workshops at libraries, universities, coffee shops, and other venues in numerous states.

Jared is a member of The Advisory Board for The New York Quarterly Literary Review, and Poetry Editor for Trail & Timberline, official journal of The Colorado Mountain Club. He is a member of The Academy of American Poets; immediate past president of Poets & Patrons; The Chicago Poets’ Club; and the Illinois State Poetry Society. He is listed in Marquis’ Who’s Who In America, among other reference volumes. He is a former associate Director of Education and Research at Institute of Gas Technology, and a former Special Appointee to Argonne National Laboratory, as well as a past adviser on technology and policy to The White House Commission on Critical Infrastructure Assurance under President Clinton.

The reading and discussion run from 1 PM until 2:15 on Thursday February 8th at Bunker Hill Community College, in the Art Gallery outside the A-300 Auditorium at 250 New Rutherford Avenue. The event is free. I'll be reading for about 40 minutes from my last two collections as well as the upcoming one, and then talking with folks and responding to questions for another 25 minutes or so.
Doug Holder at 4:04 PM No comments:
Share
(LISA LOCKE_New Host of The Somerville News Poetry and Music Series) 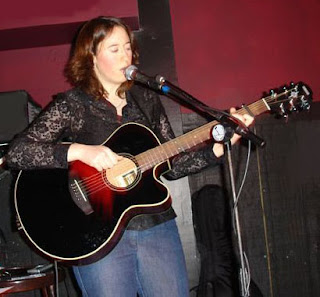 Poetry and Music Series Now at Porter Square Books
By Lisa Locke
The Somerville News Poetry and Music Series, founded by Doug Holder, has found a new home at Porter Square Books, and will take place the first Sunday of every month from 3:00pm to 5:00pm. The series is intended to be a forum for poets and songwriters, especially those from the local area. Each event will feature one poet and one musician, followed by a one hour open mic, open to poets and musicians alike.

I started in November as the host of the series, which until recently was hosted by my friend and fellow singer/songwriter Chiemi. I am excited about the new location, and would like to thank Porter Square Books for generously offering us use of their space. The November 5th series demonstrated how ideal this space will be for a gathering of wordsmiths and word-lovers. Poetry feature Mike Amado and music feature James Christensen kicked off the series in its new location.

Mike Amado is a poet from Plymouth, MA. His poems are a mix of free verse and spoken word pieces, which he describes as "between poem and song." Amado is also a drummer, which comes through in the rhythmic, almost chanting quality of his reading.

He has sought out an artistic community in Somerville because of a lack of such events in Plymouth. He regularly meets with a group which calls itself the "Bagel Bards". Amado describes it as a "schmooze fest" for poets, taking place at the Davis Square Au Bon Pain Saturday mornings from 9:00 to 11:00 am. Amado said the group is open to all.

Amado has founded a fledgling poetry group in Plymouth, a combination of workshop and reading group to be held in a bookstore "Books and More." Five local poets have signed up so far. The purpose of the group, according to Amado, is "bringing like-minded people together… It’s going to be about encouragement and support." He hopes that it will fill a need in the area.

"There are a lot of hobby poets [in Plymouth] who are pretty good in their own right," said Amado.

Amado has been writing since he was 14, and published his first volume of verse in April 2006. "Poems Unearthed from Ashes" was published by Doorance Publishing in Pittsburgh. The book can be purchased online at doorancebookstore.com, or at the Laughing Moon Boutique in Plymouth.

According to Amado, he is relatively new to the experience of being a featured poet. About his debut on the local poetry scene, he said cryptically, "The key has turned and slightly opened the door."

James Christensen is a singer/songwriter, currently living in Somerville. He has been writing songs for ten years, and performing his songs in Somerville and Cambridge venues since 2000. He says the "biggest step" for his music was becoming a regular at the Burren’s Tuesday night open mic in Davis Square. Christensen credits host Hugh McGowan who "makes everyone feel welcome" with fostering a sense of community among the open micers. He says at the Burren, "There’s always a full slate of people playing, there’s almost always a decent crowd, and a lot of people play there every week."

Most recently, Christensen has been a frequent feature at such venues as Sallie O’Brien’s, Tir na Nog, and the Lizard Lounge. He says that "Somerville in general is a great arts community," because of "the number of places that have live music either every night of the week or almost every night of the week, and it’s free. There are places you [as a musician] can play and make money. It’s friendly to musicians and it’s very friendly to music fans."

Although Christensen found playing in a "well-lit daytime venue" unfamiliar, he welcomed the opportunity to play at Porter Square Books. He said that in a bookstore there are, "a bunch of people walking around who probably don’t know who you are. They get a little bit of music in their afternoon, and you get exposed to people who would never have heard of you otherwise."
Christensen’s lyrically dense music was well suited to the quiet venue, where his words could be heard and appreciated. According to Christensen, his first writing was short stories. "Other writers commented that I was writing really skeletal little short stories, tiny little vignettes or slices of life," he said. Songwriting followed naturally once he learned to play the guitar. "It turns out that I feel pretty comfortable working in a genre that can fit on one page and either tells a story or can give a picture of someone’s life."

Christensen said that he hopes his audience will feel a connection to his work and draw parallels to their own lives. "Just about everybody on the planet has been disappointed or has had a really wonderful moment happen to them," he said. He says that the experiences described in his songs, "go everywhere from agony to elation."

Christensen has released two albums, "Road to be Free" in 2003 and "Bull Rush" in 2005. Both can be purchased on cdbaby.com or on Christensen’s web site: www.jamesmusic.net. The albums are also available for electronic download on itunes.

_Lisa Locke is the new host for The Somerville News Poetry and Music Series
Doug Holder at 7:29 AM No comments:
Share
‹
›
Home
View web version