Since its inception two years ago “Porter Square Books,” in Porter Square, right on the border of Somerville, Mass. and Cambridge, Mass., has become an integral part of the literary community and the community in general. It has become a hub for readings, events, meetings, and even great coffee from its café, presided over by the ever cheerful Rachel, the manager.

The staff, Dale Szczeblowski, managing director, Carol Stoltz ( Children’s Department Manager), Jane Dawson ( Personnel Manager), told me that they view their enterprise as a success—their criteria?—sales of course! The dynamic trio feels that people are still discovering the store—and when they do they realize it is a top shelf organization. All three are far from wet-behind-the-ears; with extensive experience in the book biz. So the store isn’t a “gee-whiz let’s put on a show”
affair.

Ellen Jarrett, the event planner, has attracted local, as well as nationally known talent to read at the store. Some of the readers who have graced the bookstore’s stage are Claire Messud, ( “The Emperor’s Children), Ed Viestries, ( a Mt. Everest mountain climber), poet Richard Hoffman, Ellen Kushner, to name just a few.

The store has community outreach. They often bring authors out to local schools, they host parties ( notably the reception for the Somerville News Writers Festival—5:30PM Nov. 12), the editorial meetings of the local Cambridge newspaper “The Alewife,” and schedule book signings for local presses like: “Ebb Tide,” “sunnyoutside,” and others. In the poetry section the shelves stacked with local poets such as: Patricia Brodie, Martha Collins, Marc Widershien, Steven Cramer, John Hildebidle, and many others.

Dale Szczeblowski, a onetime jazz musician, has started a Pop Culture section, as well as a service that rents cds and tapes.

All three folks agreed that the physical book is far from dead. They have been surprised that many of the under 30 crowd are still hungrily devouring tomes. And be reminded…Porter Square can order and deliver books the goods at least as fast as Amazon.com Porter Square Books is a very nice alternative to the increasingly impersonal world of commerce.

For more info go to: http://portersquarebooks.com/


If I had to describe “A Night in November” in a few words; I would say it is about a man in a cage. He is trapped by his past, by his petty bureaucratic job, by the entrenched divide between Protestant and Catholic Ireland.

“A Night In November,” written by Marie Jones, is a one man show. The one man, who plays 26 characters, including the protagonist Kenneth McAllister, is the actor Marty Maguire. McAllister is a low level welfare officer living in the Protestant section of Belfast. For his 40 years he has been towing the line. He moves through his carefully choreographed life like a drugged out cipher. He outwardly accepts the racist, bigoted, and hateful doggerel that is dished out by members of his “tribe,” against the Catholics living on the wrong side of the tracks.

McAllister however is starting to crack under the strain. Maguire brilliantly portrays the breakdown of this corseted man, who eventually bursts through the stranglehold of a preordained life. The sweat pours down the character’s face, he screams in rage, as he rails against the stifling bonds of family, friends and job. Maguire's portrayal of McAllister can only be described as a portrait of a raging force of nature. It is a performance of Shakespearian proportions.

Maguire fleshes out the 26 characters expertly, capturing the tics and textures of each and every one. From a wizened old sod of a father-in-law, to an in-your-face New York cop, Maguire is on the money.

In the second act McAllister embarks on a trip to New York City to witness the “World Cup,” and gains a new perspective on life. The director, Tim Byron Owen, told me during intermission that he strived to bring a universal sensibility to the production. He wanted it to be more than an “Irish” play. And indeed, Kenneth McAllister is an everyman. He is an everyman who has a mind. He is an everyman who stops to question his own existence during his all too brief time on this stage.

Doug Holder
Doug Holder at 6:12 AM No comments:
Share

Memories of the past haunt us. Sometimes we try to drown them with booze, drugs, or we leave to get a pack of “Camels” and never return. Nick Flynn, acclaimed poet and writer (and our featured reader at the “Somerville News Writers Festival”, was not able to escape his past, or in a word…his father. In Nick Flynn’s visceral and evocative memoir “Another Bullshit Night In Suck City,” Flynn can’t only escape the memory of his ner-do-well, booze-soaked father, but his flesh and blood father haunts the streets of Boston where Flynn lives, and at times the downtrodden dad is a denizen of the “Pine St. Inn,” a homeless shelter that Flynn was employed by. His father fancied himself a writer, and may indeed have had latent talent, but it rarely saw the light of day. Flynn, a poet first, has infused a wonderful sense of lyricism in many of the passages written about his father. He conveys the love, and hate, for a man who was a stranger to himself, and his son.

One of Flynn’s primal fears was that he would end up like his father—a man with a rapidly fading fantasy of the writing life, holed up in a cheap furnished room in a Beacon Hill rooming house—or worse yet sleeping on the grates in front of the Boston Public Library. In this passage, Flynn writes about seeing his homeless father walking the streets:

“Sometimes I’d see my father walking past my building on his way to nowhere. I could have given him a key, offered a piece of my floor. A futon. A bed. But I never did. If I let him inside I would become him, the line between would speed up. The slogan on the side of a moving company truck read: “Together we are going Places—modified by a vandal or disgruntled employee to read: “Together we are going Down.” If I went to the drowning man the drowning man would pull me under. I couldn’t be his life raft.” (11)

Flynn was well aware that he was traveling the same perilous road as his father. For years, like his father, he fancied himself a writer, but he was starting to succumb to his own demons: drugs, drink and the cage of a worthy but dead end job at the shelter. Flynn writes:

“I’m fast becoming the one who leaves things behind, who blows a rod and pulls into the breakdown lane and unscrews the plate and walks. Who puts his stuff in your basement and never returns. Who steps out onto a sidewalk in a small city, into the stifling car, without his shoes, without remembering he was even wearing shoes; or even wore shoes.” (118)

With the help of a therapist, Fynn managed to get out of the hole he was fast sinking in, and was able to get enough insight into himself, and the burden of his fallen father to move on. In a letter from his father’s friend, Flynn gains insight into his father’s futile charade, which eventually leads Flynn to get his own act together.

“I always felt your father didn’t like himself a lot, that he had a self-destructive side wider than most. That he carried around a sense of failure. You kids were an important part of his life, he would read to me the letters he wrote you, yet it always seemed like he was punishing himself for his failures as a father. Eventually he made a business of being a failure—if he was close to success he would sabotage it. The one role he held on to was that of being a great undiscovered writer—it allowed him to lash out in anger, it became his job to straighten the world out, to point to exactly how he’d been mistreated. The art world allowed him to get away with extravagant and excessive behavior, it encouraged it. His life became a raging performance, piece scripted by Jonathan Flynn. This allowed him to stay in control of something in his life. It became all presentation.”

Not all of us would have the strength to pull out of this maw of despair. Flynn did—and in a way realized his father’s dreams. 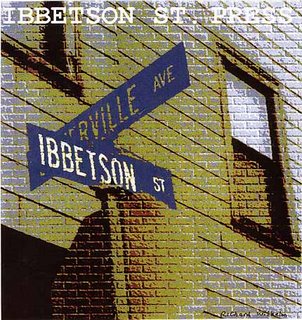 Ruth Sabath Rosenthal-- "on yet another birthday." Issue 19.