“The book project began with an awareness of absence on several levels. In my years of living and working with young adults I have been astonished by the creative and distinctive ways, in which rising generations inherit their faith, form vibrant communities of their own, practice spirituality and activism, construct theology, and make meaning of their lives…. in the literary market place younger spiritual voices are woefully underrepresented…. this collection offers a vision of creative and engaged faith and a testimony to the diverse gifts and callings of rising generations. In this spirit, Becoming Free, extends radical hospitality to voices that are frequently relegated to the margins of mainstream spiritual writing and theological discourse on the basis of age, race, sexual orientation, or religious identity.”

This anthology showcases the spiritual voices of General X and Y, and the Hip Hop generation, along with selected works of older writers. What the book proves, and proves resoundingly is that the under 40 crowd is not a bunch of Paris Hilton ciphers, obsessed with navel gazing. The poets and writers in this collection have a deep interest in the nature of being, and seem to have actively engaged in an ongoing search for their own spirituality, be it through organized religion, or through their own personal quests.


The lead poem, and appropriately so, is by the accomplished poet Sophie Wadsworth, titled “Lost.” Wadsworth using the state of being lost in the woods, as a touchstone for finding oneself in spite of the incessant chatter of a frenetic inner and outer world:

“If you’ve taken stock—
food, knife, matches,
fuel—if you backtracked
and map checked and every tree
looks alike, the mind may start
its manic talk of broken ankles
and electrical storms.

Try to still that voice.
Listen for the ripple of birdsong,
Synchronizing your breath
With the canopy’s rise and fall. “

I loved Ian Thal’s Whitmanesque romp through Brooklyn (“A Child’s Trip Through The Underworld”) on the A-Train—bringing the high holy to the everyday:

“Hail to the A-Train
circa nineteen-seventy eight
cars clanking proudly illuminated
in fuchsia, sky, black, and gold spray paint
graffitied with esoteric writing few can read…
(at any speed) ….

So often people associate religion, spiritualism, as either dry dogma or facile New Age claptrap. These poets bring a lush and engaging lyricism in a quest we are all involved in, whether we now it or not. 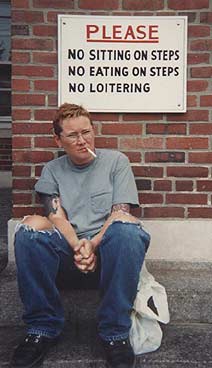 Somerville Poet Lisa King died this year at the age of 46. She was one of the most dynamic performance poets in the Boston-area. She was a member of the 1993 Slam Champion Team, an individual Boston Slam Champion, and a member of the 1996 Boston Slam team. King devoted much of her time working with Gay and Lesbian youth groups, as well as working in schools as a "poet in residence." She inspired people to thrive through poetry. I selected a couple of poems from her chapbook "Eyes Blinking Backward," that was reprinted for a recent memorial reading for her in Cambridge. To have your work considered for the Lyrical send it to: Doug Holder 25 School St. Somerville, Mass. 02143. dougholder@post.harvard.edu

The Death of Stars

In between the soft sand and shoulder
and the white lined road
a heavy curtain of velvet night
drapes down.

I feel kinship with them,
as they press against my mind
with twinkling fatality.

Poets are like stars.
They pierce the darkness of time,
to deliver image and emotion
from the void.

And unfortunately like stars,
they may already be dead
by the time their light
reaches you.

Through a vortex of flying pigeons,
my eyes catch a deeper shade of city.
Away from thickly strangled streets.
Far from the bustle of horns blaring,
lies the beauty of peaceful resistance.

Like where the sidewalk breaks from tree roots
pushing back the attack.
Or where blades of grass work through
concrete cracks on the side of a pulsing highway.

This is nature's revolution.
The rooted ones silent conspiracy
to remake the world.