The Boston Area Poetry Scene: A Plethora of Poets and Poetry


There is rarely a day that goes by that I don’t bump into a fellow poet or writer of my acquaintance. In Somerville, where I live, a poet-couple lives in a house behind me, another lives on the adjacent street, and my landlord, a poet and writer of some local fame lives downstairs. The cafes of Somerville Cambridge and Boston overflow with Bards tapping away on laptops and scribbling in dog-eared notebooks. There are poets of the “academy,” poet/scholars of the street, slam poets, black-clad avant-gardes…you name it. And there is room and a venue for them all.

In Cambridge, at 106 Prospect St, just outside Central Square, is the Out of the Blue Art Gallery. This gallery owned by Cambridge’s own Deborah Priestly and Tom Tipton, hosts two well-known poetry venues. The most noted is “Stone Soup Poets,” that meets every Monday night, and was founded and is hosted by veteran Boston poet Jack Powers, who is assisted by the very capable Chad Parenteau.

“Stone Soup” has been around since 1971, at various venues in Boston and Cambridge. Many of the movers and shakers in the poetry world like Allen Ginsberg, Lawrence Ferlinghetti, Gregory Corso, Robert Creeley, and others have read and have even been published by “Stone Soup Inc.,” the publishing imprint of the organization.

Deborah Priestly, a well-regarded and frequently published poet in her own right, hosts a poetry venue every Saturday night at the gallery. It is named after her ubiquitous dog, titled “Open Bark.”

But the republic of Cambridge is not limited to the Out of the Blue Gallery for poetry. The Cantab Lounge on Mass. Ave in Central Square, Cambridge hosts a competitive slam poetry night every Wednesday night, and the Lizard Lounge, near the Harvard Law School, has a “Poetry Jam” hosted by Jeff Robinson every Sunday night. Here poets of all stripes read their works accompanied by the music of Robinson’s jazz ensemble.

But poetry thrives not only in the galleries and bars, but in the hushed environs of a church. Jessa Pia and Lee Kidd run a poetry venue at the Harvard Epworth Church, just outside Harvard Square every Thursday night. The poetic couple describe their brainchild as a place,”…where everyone gathers weekly to practice their new scribblings.” Pia and Kidd also encourage musicians to partake in the open mic, and more often than not there is a sing-along with audience and performers.


There are perhaps more staid but no less valuable places for a poet to ply his trade. Harris Gardner, known as the impresario of the poetry scene, is the founder of “Tapestry of Voices,” which consists of reading venues at the Forest Hills Chapel in Jamaica Plain, Borders Books in downtown Boston, and perhaps his crowning achievement the annual Boston National Poetry Festival Marathon held at the main branch of the Boston Public Library during poetry month (April) each year. Over 50 poets, both established and emerging, read over the length of a weekend, as well as the general public at the open mic.

Affa Michael Weaver, a highly acclaimed Afro-American poet and professor at Boston’s Simmons College, runs the Zora Neale Hurston Center that has hosted such poets as: Askia Toure, Alicia Ostriker, and Marcia Douglas, to name a few. Weaver said the center is,” A resource to enhance diversity for Simmons and the surrounding community.”

One of the oldest reading series in the country was founded by Amy Lowell and Robert Frost in 1915. Diana Der- Hovanessian, the current president has hosted poetry readings at the Longfellow House in Cambridge for many years now. Personally I have heard such poets as Donald Hall, and Robert Creeley read from their work, while I sat on the well-manicured grounds of this historical site.

One of the newer but vibrant poetry happenings in the area takes place every Saturday at the Au Bon Pain Café, in Somerville’s Davis Square. A group of poets called the “Bagel Bards,” meet every Saturday, chat, kibbitz, edit an online journal “The Wilderness House Literary Review,” and publish an anthology, thanks to the techno-savvy poet Steve Glines. On any given Saturday poets gather in a sort of “Last Supper,” scene, seated and talking animatedly on either side of a long row of tables.

But we really haven’t covered the waterfront. In the metropolitan area poetry groups, venues, magazines crop, thrive and disappear with a breathless frequency. Any poet, of any persuasion, can find a niche, a place to plant a poem, in this rich lyrical soil.
Doug Holder at 6:07 PM No comments:
Share 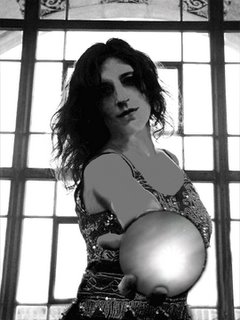 Ibbetson Poet Jennifer Matthews ("Fairytales and Misdemeanors" 2003) http://jeniffermatthews.com/ has released a new acoustic cd, through thundamoon records. I have listened to this cd, and can attest to the fact that her voice and lyrics are beautiful and haunting. This is an accomplished production by an accomplished and passionate artist. Doug Holder/Ibbetson Update to order go to http://www.bostongirlguide.com/ or contact rose@bostongirlguide.com
Doug Holder at 7:03 PM No comments:
Share

Hugh Fox, in his memoir of the small press movement, “Way, Way off the Road,” quotes the poet Charles Plymell:

“…the generation that came after the Beats, was overpowered by the Beats themselves. All that media hype. My god, the media fell in love with them. They were practically rock stars. And the post-Beats, the Hippie-Yippies, whatever you want to call them, were lost in the Beat’s shadow. They were and still are invisible!”

Plymell defined the group of poets Fox feels he was part of. Fox was solidly in his 30’s, a nerdy academic, equipped with a PhD and a foundation grant, when he picked up a copy of “Crucifix in a Death Hand,” by the “dirty old man,” of poetry Charles Bukowski. Fox was thrilled by the Buk’s use of language and felt a new door was opened for him outside the stagnant air of the academy. Fox wound up doing a critical study of the man. Here is an account of his first meeting with Bukowski:

“So I’d gone over and found him in this motel-hotel place in Hollywood. You know, the usual tattered, potted palms out in front, everything kind of run down.”

Fox told Bukowski that he wanted to do a critical study of his work. Fox was sick of Eliot and Pound, and wanted a taste of the wild side. Here is Bukowski’s response according to Fox:

“ …nothing wrong with Eliot and Pound, they’re some of my best friends, he answered, got up and started emptying the wall of bookcases that contained all of his printed work, all the books, all the magazines. Went into a closet and started taking out suitcases and throwing the books and mags inside.”

Bukowski said: “Ok I can trust you. I’m gonna give you the whole schmear. And if you find any duplicates, keep them.”

Fox wound up writing the first critical study of the man, as well as studies of Winans, and Lifshin, and began his life as a wandering-Jewish scribe, recording the comings, goings, happenings and personalities in the small press for the last 40 years.

Fox recounts his years at COSMEP, a seminal press organization, that he was a founding board member of, and his years of publishing the avant-garde lit mag “Ghost Dance.” Fox, who admits he has a very manic side, has written literally thousands of reviews of poetry books, chaps, and small press publications, as well has edited the groundbreaking anthology “The Living Underground.”

This book is not a straight narrative. It reads the way Fox talks. It is written in a rapid fire stream of consciousness style—so that often the reader has to catch his or her breath. His description of fellow writers is often inspired. Here is a portrait of a down-at-the-heels Richard Nason, a movie critic for TIME magazine,

“And when he’d come into the office out of the Captain Midnight dark, you always smelled the booze on him. Pickled full time. Fedora. Sports jacket. Topcoat. Remnants of former glory. Only when he pulled his topcoat off there would be five pens in the front pockets of his sports coat, all of them uncapped, leaking into the coat itself, another uncapped pen in his shirt pocket also leaking, so it looked like he had been harpooned and was bleeding blue blood.’”

Fox has an inquisitive, fascinating, and hungry mind, and he covers a wide range of subjects from drug-induced writing, ancient Indian cultures, men’s sexual prowess and perversions, you name it. In the books there are countless anecdotes about personages from the world of the small press like: Lyn Lifshin, A.D. Winans, Harry Smith, Len Fulton, Richard Kostelantz, Allen Ginsberg, “The Boston Underground,” Bill Costley, Sam Cornish , Bill Blatty, Donald Hall, and Fox has an original take on them all.

In ways Fox’s literary history reminds me of Howard Zinn’s writing. He gives you a view of the outsider, and how the outsider views things. This is a history you won’t find in the classrooms, although it should be there. Fox makes darkness visible, with this iconoclastic, zany and compelling memoir.